From CycleChaos
< Honda CB350K
Jump to navigation Jump to search 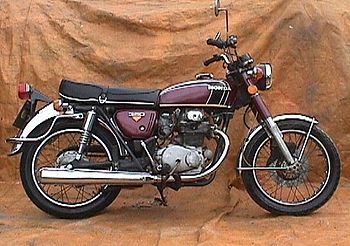 The blood line starts at the nine-two blob on the rev counter and extends to a very precise 11,000 do-or-die" screaming rev limit! Long gone are the days of the long-stroke middleweight... the B31s, Vipers, Model 50s, Bullets and the like.

Whether it is good or bad is debatable and many of the sports singles like the Gold Star BSA and Velocette Viper Clubman had just as good performance as this new high-revver from Japan ... but there the similarity ends!

In practically all other aspects the machines are identical except in color scheme. They even suffer the same small 2.6-gallon fuel tanks, which may be ideal for popping about town but could certainly be larger for long distance work.

Gearbox ratios, too, are the same, although the final drive ratio of the 350 is higher using a 2.250 as the final reduction in comparison with 2.375:1 on the CB 250. This gives a very slightly higher top speed without detracting anything from the acceleration.

The bike we had on test was brand spanking new and we had to take it reasonably easy until at least 850 miles were showing on the very readable instruments.

Starting, with the electric starter, was of course simplicity itself. The routine when cold was simply to turn on ignition, fuel and close the choke on the twin Keihin carburetors. A very slight whiff of throttle and press the starter button on the right-hand twist grip. Vroom!

A few minutes to warm up and then the choke could be turned fully off and with a light pull on the silky smooth clutch, the first gear could be engaged. There was a slight clunk when cold due to clutch drag, but this disappeared when warm.

Acceleration from a standing start is average to good, parti­cularly if you hang on to the revs and watch them fly rapidly the 9200 red line. In fact, this is one point where the 350. like the 250, could be faulted.

At small throttle openings, you could hear little more than the rustling of the overhead cam valve gear, but on full throttle the exhaust really started to bark.

Changing through the gears upwards could be accomplished quite easily without using the clutch with barely any trans­mission snatch, although this is not really wise for the less-experienced rider. In fact, the clutch is so light that it is no real effort to use it all the time when changing up and down the gears.

Acceleration over the standing quarter mile was 16.8 seconds. Not outstanding but we dis­covered that the 350 is surpris­ingly under-geared because even in the upright sitting position with a fully kitted-out rider on board, the engine would still spin into the "forbidden red" area in top gear at just over 90 mph.

Obviously, by changing the gearing with a larger gearbox or smaller rear wheel sprocket on the back, maximum speed could be improved considerably without doing any further tuning to the motor. Simply add a sports-type fairing, clip-on handlebars and raise the gear ratios, and you must have a 100-plus-mph bike.

The question of course is will the handling and brakes take it? The answer! As far as handling is concerned, it isn't until the bike is topping 80 mph that you have any worries, but then if it is caught by a sudden wind or in the track, it does take on a peculiar, head wallowing movement; almost as though one of the tires has gone soft.

But up to this maximum speed the CB 350 is delightful, it can be twisted through the corners like a lightweight and the sus­pension irons out virtually all but the big potholes.

Two-up riding tests the ground clearance of the bike even when the suspension is set in the hard or highest posi­tion. Pillion passengers com­plained of vibration through the footrests once the revs started to climb over the 5000 mark, but apart from that they seemed happy with the riding position and comfort, if short space, on the dual seat.

Using the motor hard, fuel consumption dropped to around 50-55 mpg, but simply by keeping the revs under 7000 you could easily obtain over 70 mpg with the added bonus of really quiet motorcycling.

One of the marvelous things about the Honda, in spite of being thrashed without mercy, was that the motor showed absolutely no signs of oil leaks on the outside. It finished the test as clean as when it started.

Braking on the CB 350 was just adequate. It was neither brilliant nor poor because although the twin-leading-shoe brake was very progressive and predictable for speeds up to about 70 mph, it did lack power when used to the full from 80-plus and would fade with repeated high-speed stops.

The trafficators are controlled by a three-position switch on the left handlebar and, at last, this control can be used effectively by a gauntleted hand without "over-switching". and the slight squealing of rubber on road as the brakes were applied heavily was very comforting to the ears.

What, then, is the general feeling about the Honda CB350 among the staff of MCM who have ridden it day in and day out over the past few weeks?

Firstly, it is very much a dual-purpose machine, equally at home squeezing quietly through traffic jams in London or taking the occasional 100-mile motorway or main-road trip in its stride with one or two on board.

Slight criticisms on braking and high-speed handling with a minor complaint about the buzzing vibration felt by pillion riders.

Fuel consumption varied from reasonable to extremely good, especially for a 350, where most of the modern two-strokes really start to become thirsty.

It is obvious that with very little effort this machine could be turned into a high performer but the biggest question of all is: who wants a 350?

The electrics on the Honda are 12 volt and extremely good. The lights are controlled from a switch in the headlamp nacelle with a parking light controlled by the ignition switch. Dip and main beam are easily operated with the right-hand handlebar switch after first being turned on at the headlamp.

The class really died when legislation came into being limiting the learner rider to a maximum capacity of 250 cc. Once past the test, they either move on to a much bigger banger such as a 650 or 750 or drop out of motorcycling to buy the proverbial tin box on wheels.

So where does the CB 350 fit in? It's only £29 dearer than the 250 model and with the extra flexibility and performance is definitely worth it! This is particularly the case if you carry a pillion passenger on the occasional long trip.

It may not be a multi-cylinder "superbike", but it offers far more in economy, is less of a big beast for heavy traffic conditions and will cruise happily at 70 to 80 mph with two people on board.

Honda have gone where angels fear to tread in the motorcycle market before and set the trend! Are there enough people wanting a reasonable performance bike, but not having enough money to pay superbike prices for petrol, in­surance, spares and service?

The CB 350 is the inter­mediate machine for the rider who has passed his test but wants a good general purpose machine with a little more power than a 250 . . . that in a nut­shell is the CB 350!