It came with a 120/70ZR-17 front tire and a 190/50ZR-17 rear tire. Stopping was achieved via 2x 320mm discs 4 piston calipers, Combined ABS and sintered metal pads in the front and a Single 220mm disc, Combined ABS and sintered metal pads in the rear. The front suspension was a 43mm inverted HMAS cartridge-type telescopic fork with stepless preload, compression and rebound adjustment, while the rear was equipped with a Unit Pro-Link with gas-charged HMAS damper featuring 10-step preload and stepless compression and rebound damping adjustment,. The CBR1000RR Casey Stoner Repsol Replica was fitted with a 17.7 Liters / 4.7 gal fuel tank. The bike weighed just 173 kg / 381.3 lbs. The wheelbase was 1407 mm / 55.4 in long. 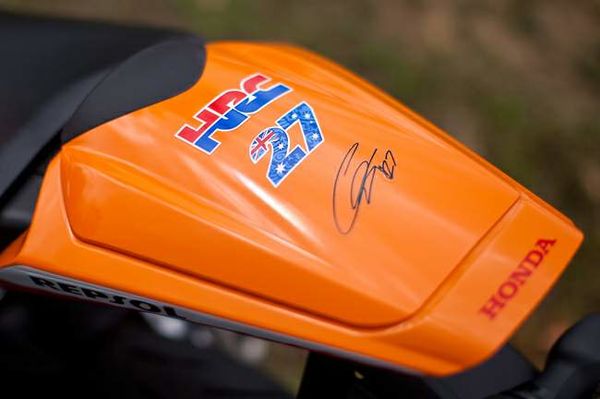 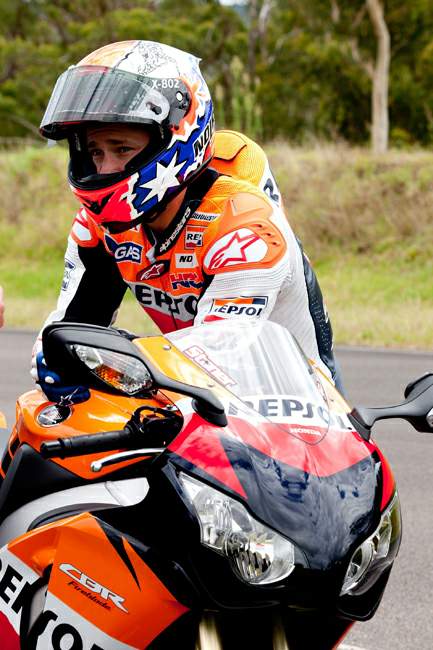 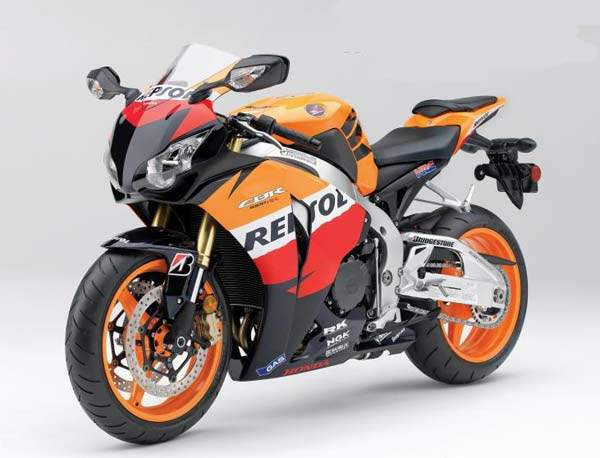 To celebrate the exciting news that yet another Australian MotoGP champion is on board a Repsol Honda, Honda Australia has announced the release of a special edition Casey Stoner Repsol Fireblade.

With only a 170 limited production run by Honda Australia, the CBR1000RR 2011 Casey Stoner Repsol Fireblade will be the most popular ride of the season.

Each Casey Stoner special edition will come with a hard mounted wall plaque of authenticity (numbered 1 of 170), a Repsol Rear Cowl and Casey Stoner Decals mounted on the motorcycle.

Hailed as Hondas most popular sportsbike of all time the CBR1000RR constantly out-performs competition and has built a well-deserved reputation for delivering the full-blooded joy of extreme performance.

The familiar Repsol colors complement the Fireblades race-ready profile and emphasise the aggressive details of its cowling, chassis and high-performance components. All this is further enhanced and personalised by the edition of Casey Stoners number 27, his signature and branding.

The super-light, liquid-cooled 4 stroke engine brings immense levels of power with perfect smoothness and refinement of delivery as well as crisp throttle response allowing the rider precisely the level of acceleration they require at any moment.

The remarkable chassis is equally responsible for the Fireblades continuing success and ever-growing reputation as the ultimate road-going sports bike.

Combining the stiffness required to harness the engines formidable power with the compliance needed to gain maximum traction, the frame is a masterpiece of efficient design.

Compact dimensions contribute to the all-important mass centralisation, while also giving the rider the maximum flexibility and movement over the machine to achieve the optimum weight distribution for any given riding conditions.

The motorcycle that has continually combined high horsepower with a lightweight and agile chassis, the Honda CBR1000RR, returns for 2011.

Not much has changed on the sportbike, except for some new color schemes. Besides looks, internally the CBR remains the same as last year's motorcycle.

Also like last year, the CBR 1000 RR is available with C-ABS, Honda's famed Combined ABS. This system is a true "brake-by-wire" design, which means that they are electronically controlled.

Unlike conventional ABS, where the feel at the lever is soft due to hydraulic pressure, the C-ABS offers a more responsive brake-lever feel.

Sport riders tend to be a proud lot; many even view their riding skills as a rite of pfassage. So it stands to reason that a liter-class supersport bike equipped with linked brakes, let alone the anti-lock/combined-brake system featured on Hondas latest CBR1000RR, goes against the traditional performance riders mindset. But with electronic rider aids now commonplace in MotoGP racing, theres no shame in setting the ego aside and embracing cutting-edge technology.

Honda has set a new standard in C-ABS performance with the system currently available as an option on its 600 and 1000cc CBR-RR models. Unlike ABS or linked brakes of old, the CBRs setup has completely eliminated lever pulsation during system cycling and presents no abruptness in its linked-brake effect. The added sense of safety instilled amidst rush-hour traffic, doubly so in wet weather, is enough to validate the additional 25 pounds and $1000 premium the C-ABS option tags onto the standard model.

In our recent Open-class shootout (Supersport Days, August, 2009), the C-ABS version of the CBR1000RR displayed steadfast poise and competitive performance while lapping a race circuit at a very heated pace. While not the outright quickest bike of the test, the Honda was widely regarded as being the most confidence-inspiring in testers subjective notes, making it an ideal bike for street/track-day use. Racers will undoubtedly opt for the lighter standard model.

Daily use as a commuter or canyon carver is where this version of the CBR truly excels. Weighing 435 pounds without fuel puts the bike on par with its class peers. Handling is light and neutral, yet extremely surefooted. The Honda Electronic Steering Damper eliminates the inherent compromise of conventional adjustable dampers, offering little resistance at low speeds, with damping automatically increased seamlessly in relation to speed or acceleration.

Spot-on fuel mapping and a unique feature Honda call Ignition Interrupt Control, which smoothes on-throttle response below 6500 rpm, along with excellent shifting quality, all contribute to the inline-Fours 157 rear-wheel horsepower feeling quite manageable. The back-torque-reducing slipper clutch pulls double duty by eliminating rear-wheel hop during hard deceleration and also applying pressure on the plates under acceleration to provide lighter clutch action. Due to the CBRs refined and feathery control operation and exceptionally low level of engine vibration, comfort range really comes down to a riders tolerance for the RRs sporting seat pad and ergonomics.

American Honda was understandably reserved in the quantity of the $13,999 C-ABS models imported in 2009. Considering that every unit has sold stateside with the bike enjoying even greater success in Europe, we dont anticipate the budding ABS supersport movement to stop dead in its tracks any time soon.