It came with a 120/70ZR-17 front tire and a 190/50ZR-17 rear tire. Stopping was achieved via 2x 320mm discs 4 piston calipers in the front and a Single 220mm disc in the rear. The front suspension was a 43mm inverted HMAS cartridge-type telescopic fork with stepless preload, compression and rebound adjustment, while the rear was equipped with a Unit Pro-Link with gas-charged HMAS damper featuring 10-step preload and stepless compression and rebound damping adjustment,. The CBR1000RR Tricolor HRC was fitted with a 17.7 Liters / 4.7 gal fuel tank. The bike weighed just 179 kg / 394.6 lbs. The wheelbase was 1407 mm / 55.4 in long. 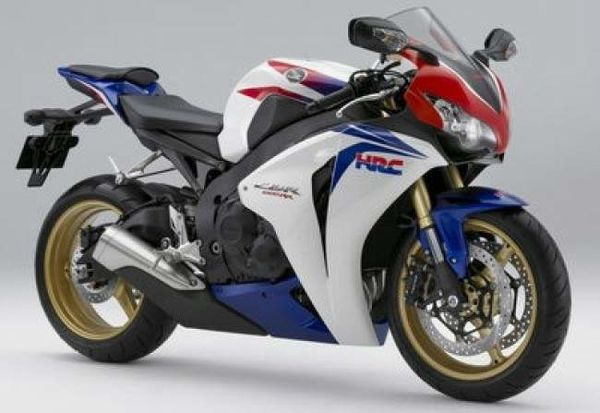 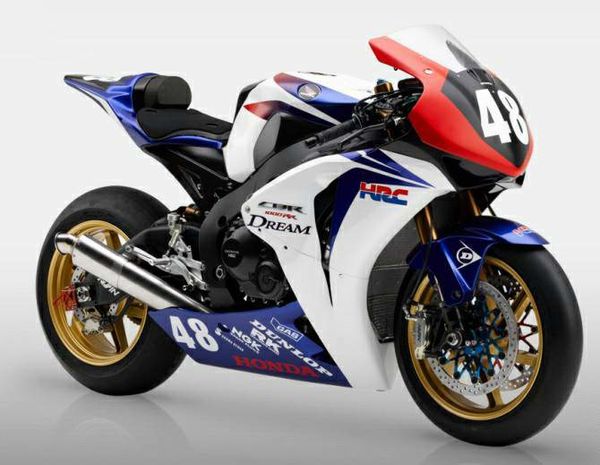 This 2008 Honda CBR1000RR has been released in a Tricolor-HRC red, white and blue  scheme in Japan.

With the 2008 Honda CBR1000RR, the Fireblade has completed 15 years, and still continues to evolve and improve. The first FireBlade came out in 1992, and as the lore goes, the bike was an absolute revelation for its time. The earlier Honda CBR1000F weighed 235kg and had about 130bhp. The CBR900RR weighed only 185 kilos dry, and its 892cc inline-four made 124bhp at 10,500rpm. The tone was set for a lighter, sportier and better handling machine.

Created by Tadao Baba, then a Large Project Leader at Honda, the first FireBlade followed his Total Control ethos. Rather than just brute force, the first CBR900RR was designed to work as a cohesive whole, and it did. Compared with bikes like the Yamaha FZR1000 and YZF1000R, Kawasaki ZX-11 and ZX-9R, and Suzuki GSX-R750 and GSX-R1100, the FireBlade was lighter, sharper, often quicker, and definitely more responsive. The first FireBlade did the standing quarter-mile (400m) in 10.8 seconds, hit a top speed of about 245km/h, and right away made everything else look and feel old and ponderous.

Between 1996 and 2002, the FireBlade got various updates, with engine capacity going from 893cc to 918cc to 929cc and finally 954cc. Power went up from the original 128bhp to 155bhp, weight dropped from 185 kilos to 168kg, and top speed went from 245km/h to 270km/h. Over the years, the Blade also got bits like a USD front fork, 17-inch front wheel (in place of the 16-inch original, which apparently caused problems with high speed stability), new bodywork, and fuel-injection.

The 900-series FireBlade was discontinued after 2003, with Honda launching the CBR1000RR in 2004. But well fast forward to 2008, when Honda again introduced the most radically redesigned Fireblade in years. The 2008 CBR1000RR looks completely different from its immediate predecessor, and while we still think the new styling looks awkWard from some angles, there is apparently substance below the skin.

The 2008 Fireblades all-new 999cc inline-four features dual-stage fuel-injection, controlled by an ECU that provides two separate fuel-injection and ignition maps for each of the engines four cylinders. The engine makes 178 horsepower at 12,000rpm  not too bad for a motorcycle that weighs 199 kilos. No wonder then that the current Blades top speed is in the region of 290km/h, and itll do the standing quarter-mile (400m) in just 10.2 seconds.

The engine has titanium intake valves, the pistons get molybdenum coating and the cylinders are Nikasil-coated. The stubby little exhaust is tucked down low, MotoGP-style, and signals the end of the underseat exhaust era.

The one on the left looks completely over the top, the 2008 model is more subdued

Compare the 1992 original with the 2008 Fireblade, and you have to admit that the current model isnt nearly as radical, as pathbreaking as the first CBR900RR was in its time. The new bike has an engine that 100cc larger and 54bhp more powerful. Its also packed with cutting-edge electronics and the suspension and brakes are in a different league altogether.

On the other hand, the new Fireblade is also about 15kg heavier than the 1992 CBR900RR, and while hugely competent, it didnt make everything else look completely outdated when it was launched. So, wed say that in terms of being radical and breaking new ground in sportsbike tech, the 1992 FireBlade probably has the latest one beaten by some margin. Now, Honda, next year how about an 800cc V4-powered 200bhp Fireblade, that weighs 170kg and doe 320km/h