Power was moderated via the Wet multiplate hydraulic clutch. 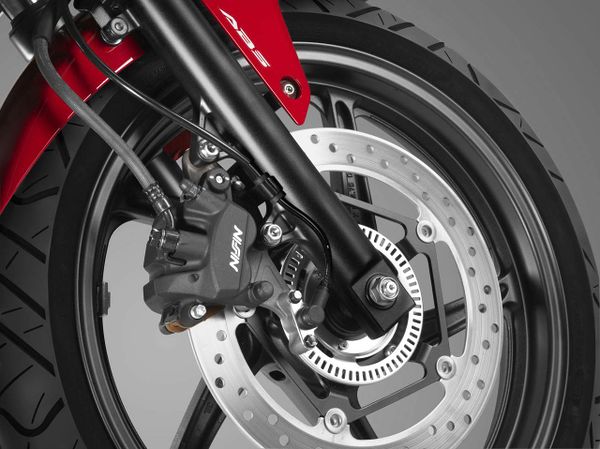 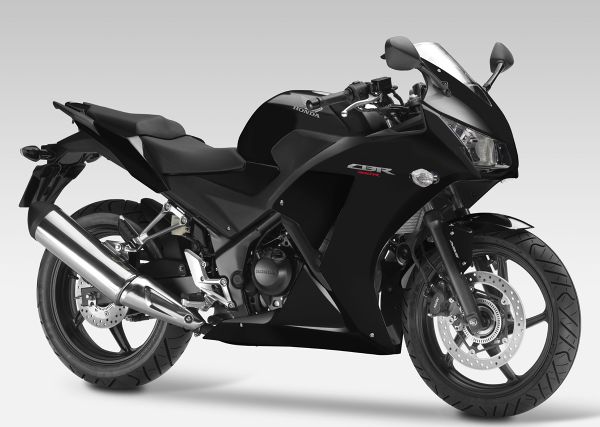 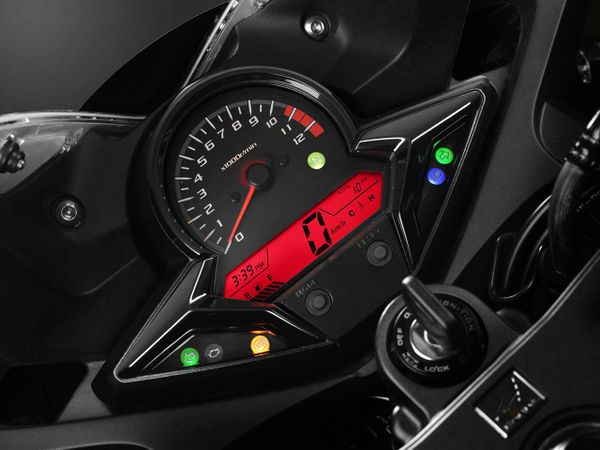 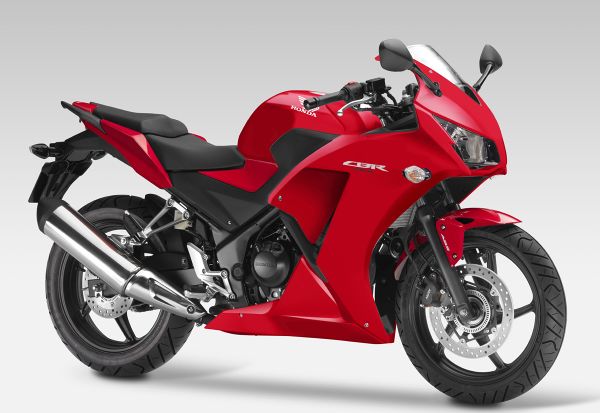 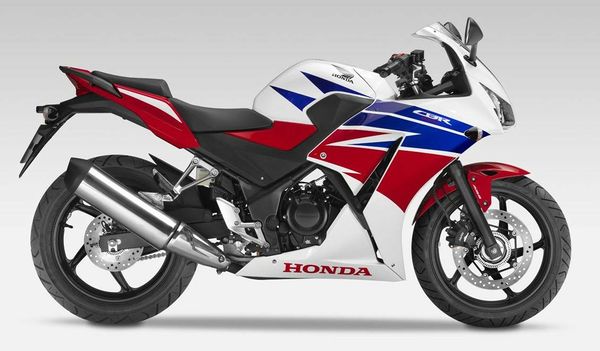 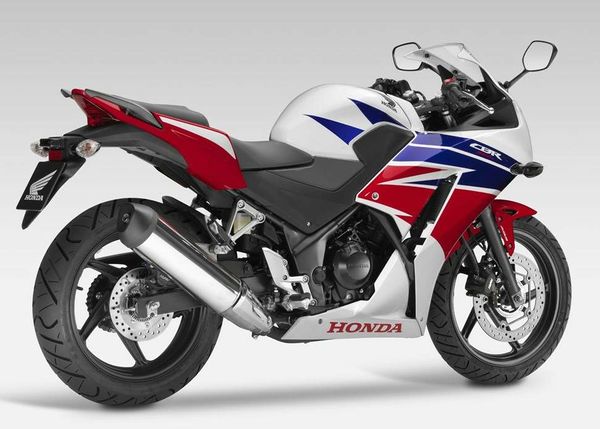 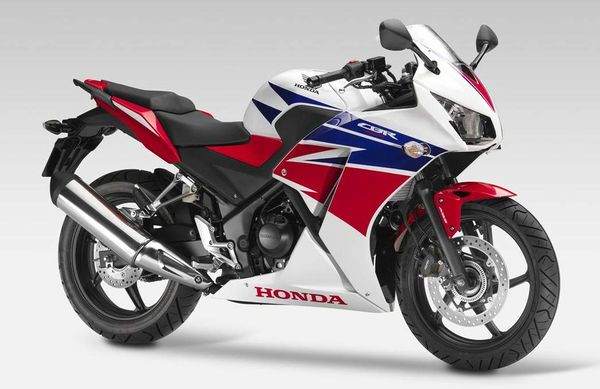 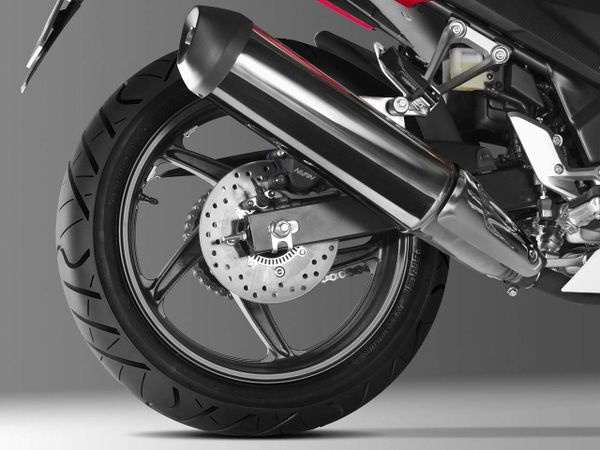 A true sporting lightweight can offer much of the excitement of a bigger machine and sometimes more, as every last scrap of performance can be accessed, used and enjoyed. For the less experienced rider, its a great platform from which to hone riding skills, and much more affordable in every respect  initial purchase, insurance, fuel and tires  than more higher-powered sports bikes.

For 2014, Hondas engineers have taken it back to the drawing board, and the result is the new CBR300R.

The development approach for the CBR300R took two avenues: more power and torque and a much stronger CBR identity, with stronger visual echoes of its larger capacity siblings, giving a more direct taste of the CBR brand itself.

Firstly, the liquid-cooled engine is now 286cc, achieved through a longer stroke. It has also received upgrades to take full advantage of the increased power, torque and vibration that the larger capacity brings. Work has centred on the engines throttle response and power delivery, while a new CBR500R-style exhaust is both an aesthetic and functional upgrade.

The CBR1000RR was design inspiration for the CBR300Rs new look. Dual headlights closely mimic the bigger bike and aggressive styling for the fairing, fuel tank and seat unit are unmistakably CBR. The undercowl is also color-matched, adding a premium feel.

Compared to larger capacity twin-cylinder machines, the CBR300R is a more compact, lighter and more manageable package for both new and experienced riders, with significantly lower purchase and running costs complementing its flexible and accessible performance.

Countering extra vibration from the longer stroke, the balancer shaft is heavier and the engines frame mounts are stronger. The PGM-FI fuel injection  with 38mm throttle bore  has been remapped with a focus on crisp throttle response across the rev range. A new CBR500R-inspired muffler design with larger internal volume adds big-bike style and a pleasing exhaust note.

The CBR300Rs single-cylinder powerplant offers many benefits for any rider. Because the number of moving parts is kept to an absolute minimum, the engine is more fuel efficient, and small details like the low-friction piston rings and iridium spark plug help reduce running costs.

Acceleration is greatly improved thanks to the larger capacity, and the six-speed gearboxs final drive ratio has been lengthened for more efficient highway speed cruising. Returning 30.2km/l (WMTC mode*), it can cover over 390km on one fill-up of the 13-litre fuel tank.

The mechanical simplicity of the engine reduces servicing costs  another essential element in creating a problem-free ownership experience. It compact size also helps create a bike that is lighter and more manageable than a multi-cylinder, and allows it be positioned perfectly within the chassis for an ideal front/rear weight distribution.

The CBR250Rs design inspiration had echoes of the Sport Touring VFR1200F. For the 2014 CBR300R, styling cues are taken directly from the Super Sport range-topping CBR1000RR with an angular silhouette and aggressive full fairing, color-matched undercowl, dual headlights and steeply raked rear seat unit.

The riding position has been subtly altered  while seat height remains 785mm, ground reach has been improved with a narrower, re-shaped seat. For a sleeker look both mirrors sit on shorter arms.

A steel diamond twin-spar frame provides the backbone of the CBR300Rs chassis and features a rigidity balance carefully tuned for both a sporty dynamic in corners and stability at speed. Rake is set at 25°05′with trail of 98mm and wheelbase of 1,380mm; kerb weight is a class-leading 164kg.

37mm telescopic forks and Pro-Link rear monoshock provide well-damped, reactive suspension that transmits plenty of feel to the rider. Cast aluminum wheels  rim sizes front 17 x 2.75in and rear 17 x 4in  wear 110/70-17 and 140/70-17 tires to provide a good combination of grip and agility.

The CBR300R will be available in the following color options: Ross White Tricolore; Millenium Red; Black

Review Hondas smallest CBR got a little bit bigger and better with the release of the 2015 CBR300R. Last year, the CBR250R was absent from Hondas lineup, but not because the 250s sales were lacking. Rather, Big Red was busy beefing-up the CBRs Single and restyling the bodywork. Honda invited MotoUSA for an abbreviated test ride on the new CBR300R around the hills and coast close to its Torrance, California, headquarters. In order to align with the rest of the CBR line, Honda restyled the curves and angles of the 300R. Gone is the single headlight, replaced by a dual-unit configuration resembling the CBR500R and CBR1000RR. Honda claims the styling updates allow entry-level owners to sport a more veteran look on their first-ever mount. And save for the slightly diminutive size and less aggressive rider stance, the CBR300R does look the part of a high performance repli-racer at a glance. I say wear your size deficit or newness to riding with pride, but more self-conscious riders can hold their heads high on the CBR300R. Its a great looking little sportbike. In the saddle of the 300R, the first thing that comes to mind is how low the seat feels thanks to the thinner midsection. Even though the seat height is just 30.7 inches, shorter riders should not struggle getting both feet to the pavement. Honda also offers a lower accessory seat that cuts another inch off the height. Positioning of the clip-on bars is just sporty enough to allow for a slightly forward rider position, but not so aggressive that youll find pressure on your wrists like a full-on supersport. The pegs are just low enough for a comfortable position for my 510 frame, while still offering enough leverage when swopping through the corners. In our last entry-level sportbike shootout between the CBR250R and the Kawasaki Ninja 300, the CBR carried a 47cc disadvantage and it showed. Even in the small bore world there are horsepower wars, and Honda has stepped up to plate with 37 more cubes in the CBR300R. The 76mm bore has not changed, but the stroke has been increased from 55 to 63mm for more power throughout the range. Hondas PGM-FI fuel-injection system has been remapped to match the increased displacement,and the restyled exhaust canister has a larger internal volume. Peak horsepower is 17% more than the outgoing 250.

On our short ride, we did plenty of stoplight-to-stoplight blasts and the CBR300R is more than capable of leaving four-wheeled traffic in the dust. While the horsepower increase is noticeable, its not a night and day difference. More impressive is the increase in torque that makes for less rowing through the reasonably slick six-speed transmission. You can chug down to just above 2000 rpm and still have enough beans to accelerate. This will make life for both beginners and experts easier. The CBR300Rs handling is light and nimble around the mean streets of Torrance and Palos Verdes. In town, a less hunched-over ride makes for plenty of leverage to get the little Honda pointed anywhere you want it. While the curvy bit of the press ride consisted of five passes through two S-corners for photos, the 300R is a capable handler at speed. The go from upright to leaned-over smoothly and once in the corner you can alter the CBRs trajectory easily and without fuss. The non-adjustable suspension  save preload on the rear shock  does a great job handling spirited cornering, even with my 220-pound frame. The smoother you are coming to the corner the better things work; push too hard or get sloppy and the rear will jump around a bit. In the hands of an expert, the littlest CBR can embarrass less skilled riders on larger and more high-tech bikes in the turns. On the binders the CBR300R has a split personality. At slower speeds the single 296mm front disc and four-piston caliper feels soft, but give it a solid stab at speed and the power kicks and feels great. The rear is solid as well, but will lock up fairly quickly. For those that are newer or worried about a few skids, Honda offers ABS for $500 more. For 2015 the ABS is two-channel rather than being combined, which we applaud. With a pricing increase of just $200 to $4399, the CBR300R is an excellent small-bore sportbike for any skill level. The new look and better fit for all riders combined with more usable power makes the CBR300R much improved over the CBR250R. Looks like it is time for another showdown now that the CBR300R is packing more of a punch. Source Motorcycle USA