It came with a 120/70 ZR17 front tire and a 180/55 ZR17 rear tire. Stopping was achieved via 2x 310mm discs 4 piston calipers in the front and a Single 220mm disc 1 piston caliper in the rear. The front suspension was a 41mm inverted HMAS cartridge fork with spring preload, rebound and compression damping adjustability. while the rear was equipped with a Unit Pro-Link HMAS single shock with spring preload, rebound and compression damping adjustability.. The CBR600RR Lüthi Replica was fitted with a 18 Liters fuel tank. The bike weighed just 163.7 kg / 361 lbs. The wheelbase was 1389.3 mm / 54.7 in long. 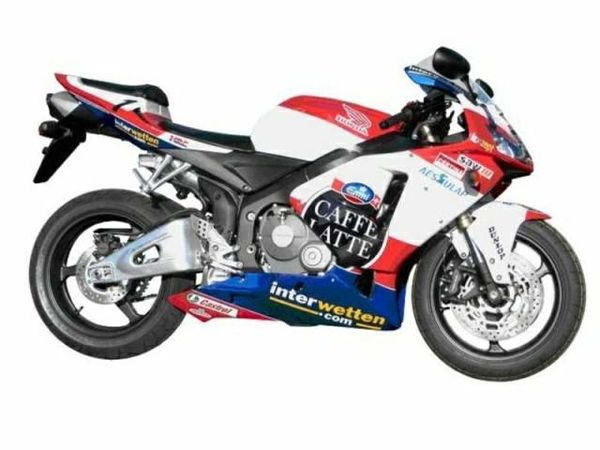 Introduced in 2003 the CBR600RR has gone on to dominate Supersport competition around the world. Brisbanes Chris Vermeulen won the World Supersport Championship onboard a CBR600RR in that debut year for the model and his team-mate Karl Muggeridge wrapped up the 2004 World title a round early after dominating the category in a fashion that had never been seen before. While Australians have been dominating supersport competition on the world scene on the back of CBR600RR machines, here in Australia the trend has been reproduced with Adam Fergusson and Josh Brookes dominating nearly every race they have entered. In fact in Australian Supersport competition Honda amassed nearly twice the amount of manufacturers points than any other distributor.

Our UK correspondent Colin Schiller recently spent some quality time with the newest incarnation of the CBR600RR and came away impressed with what he found.  From here Colin takes up the story

Some things never change. Like Honda UKs reluctance to lend me a motorcycle so I simply bought one instead. What better way to get an objective test? First up we were impressed with how well finished the CBR600RR was compared to the CBR1000RR we had bought a year earlier.  We surprisingly had a few concerns over the build quality of the plastics etc. with our 2004 Fireblade but in contrast the new 600 gives an impression of solidity, integration and deep core lustre to the bodywork and ancillaries.

I still was not game to take any chances though so actually wedged a beer towel twixt my tank and textiles to make absolutely sure of preserving any vulnerable tank paint under the pressure of the mighty Schiller luv spuds. Its an absolute jewel of a machine, though, and seems so much more homogeneous than the Blade, the only thing that lets it down in stock trim being the standard issue semaphore size indicators, which are the first thing to graze against gateposts, garages, alleyways etc., and transfer the shock and damage to the flimsy Italian built fairings. Its also a tiny bike, more like an overgrown 400 compared to the ZX, the R6 or even the Hummer-ungous Daytona, but the seat is still plenty accommodating despite the fact that the ride height¹s been raised over the years, and is now more uncompromising racer than ever that pays scant lip service to supersize riders. Climbing aboard the overall and immediate impression is of the unequivocal diminution and lack of mass. The controls arent as animate and sensitive as the ZXs (the levers for instance are as cheap and formless as only Taiwan can) and apart from the new, lighter (of course) integrated tacho/speedo unit, you could be forgiven for thinking that this was the same bike you had tested last year, or the year before, or the year before or the year before, right back to 1996 Even the way the tank unit joins to the fairing is similar to generations of yore, however funky and new-for-03 the headlight and exhaust design might have been.

Pulling off is not an inspiring affair, and there is a lull before build up that is the antithesis of the Kwak and even more so the R6 which just digs in and drives like a Duke. The engine is, creamy smooth, however, and surprise, surprise, so is the gearbox, a major improvement at last despite many seasons of promises. For once I never gave it a thought, which is as a good box should be. Clutch is the typically strong and purposeful Honda affair and you would have to go some to cook it. As ever, early drive is utterly fuss free and linear, if a little bland. But at eight thou or so a funny thing happens a power band appears! From hereon in the drive is purposeful and goddam it, almost exciting and the objective of the CBR as a track bike becomes obvious, particularly when you get past peak and discover that the Honda has more useful overrev than anything else in the class  just what you need for hairpins at altitude as well as the exit of Goddards. In fact, the only zone to roam on the CBR is above eight grand where even in top at around 95mph, the drive is determined right the way round to 13,000 and you find yourself being seduced into an ever higher top speed. Once into the seam of torque above five figures, any minor penalty in terms of performance or excitement that the CBR loses out to the 636 is negligible, though it has to be admitted that rev for rev the Kwak still has the edge. This embellishment of the mid-range is in fact, nothing to do with an increase in power but everything to do with a reduction in weight, and even though the claimed all-up figures are as laughable as ever, there is a noticeable cut in kilos, a brace of which have been pruned from the frame alone, and a further kg from the forks, if the Honda hype is to be believed.

A new fine die-cast process employed in hollow frame construction has enabled Honda to trim small amounts of material in areas not subjected to stress while still being able to provide the torsional strength in all the areas where it is critical. A full 1.5kg has been trimmed from the frame while the new die-cast seat rails add to the savings with another 0.7kg shaved in this area. Weight has also been saved through the use of a new composite aluminum swingarm.

The swingarm now integrates the dampers upper mount into its new one piece design which helps to completely isolate the frame from the shocks and stresses generated by the rear suspension.

Even pushing the bike into the van, the CBR is the undisputed miniature of the group, and its not just the weight, so much as its compactness which really strikes you and which translates as amazing agility even by the standards of the class. Ever a neutral and natural steerer, the CBR now turns even faster than the 03 or 04 bike and can be flicked in with little more than a hip dip, while the accuracy of the way the front end tracks is not prejudiced in the slightest, nor has it any need of the electronic damper as fitted to the 04 and 05 Blade. Suspension is firm, but fair and makes the Yamaha feel soft by comparison, though no way is it as sublimely balanced as the GSX-R or as race-oriented as the 636. If anything, the rear shock still feels a little blunt compared to the latter two. Up front, however, the improvements in the front fork mean far more resistance to dive and an even greater tolerance of the brake lever well into the corner radius, while the new radial mount calipers are possibly the best of the group. On the road, on softish rubber, such as Bridgestones, it would be hard to find the limit of the CBR once youd dispensed with the hero haemorrhoids, though these are shorter than the Blades and fitted to much nicer looking pegs. Having said that, the CBR just doesnt seem to attack the apex like the Kawasaki.

Honda has been listening to their factory riders. And despite their best efforts to ensure the two wheeled public that the 2005 CBR600RR is still the bike built for the practical street supersport rider, its all too obvious that the new RR is a pure shot at the WSS title again  not to mention countless domestic track successes the world over.

The Aussie launch of the six was held recently at sunny Eastern Creek Raceway, and from the outset it was clear that this little screamer is a more serious supersport contender than ever. In fact, I cant think of any out of the crate supersport machine that could match the CBR around the Creek. It was a brilliant bike in 2004 but with a few niggling chassis problems and a lack of mid-range the CBR fell behind in terms of raw performance.

Mid-range mumbo is up  and I found it particularly noticeable off the up-hill, hi-load exit of turns three and seven  plus coming on to the straight. Having spent the previous week on a ZRX1200 I honestly didnt pick the torque increase at first but a 20-minute run on the 2004 RR followed by a similar run straight on the 05 cemented Hondas claims.

The biggest improvement, however, comes in the form of chassis response and steering. The 2005 CBR turns-in accurately and quickly and follows this up with pin-sharp tracking and brilliant control off the turns  an area that was always a struggle on the 04. The front end is firmer thanks to the all new inverted forks (although I did go slightly harder on comp and preload) and the rear end, with an all new shock body, spring and linkage rate, is also firmer and much more compliant (ride-height is up substantially though seat-height is similar due to thinner seat padding).

On or off the brakes the RR is responsive and accurate during turn-in and this had tongues wagging all day The radial-mount calipers are super powerful but very responsive to subtle lever inputs and I would consider them the current pick of the supersport bunch. And stability on the brakes is a strong point, too.

Already the new machine is proving quick out of the box for serious racers with the most recent World Supersport pre season test session seeing four of the top five positions on the timesheets filled by new CBR600RR machines. Source