It came with a 120/70 ZR17 front tire and a 180/55 ZR17 rear tire. Stopping was achieved via 2x 310mm discs 4 piston calipers in the front and a Single 220mm disc 1 piston caliper in the rear. The front suspension was a 41mm inverted Big Piston Fork with spring preload, rebound and compression damping adjustability while the rear was equipped with a Unit Pro-Link HMAS single shock with spring preload, rebound and compression damping adjustability. The CBR600RR Repsol was fitted with a 18.2 liters / 4.8 gal fuel tank. The bike weighed just 156.5 kg / 345 lbs. The wheelbase was 1369 mm / 53.9 in long. 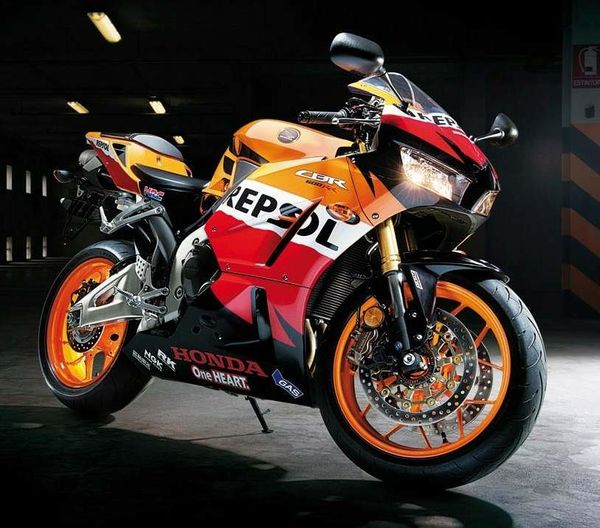 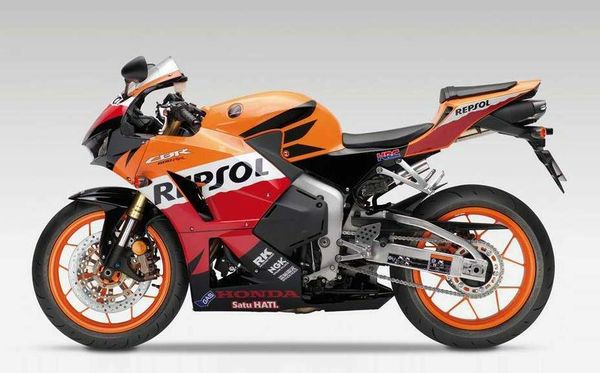 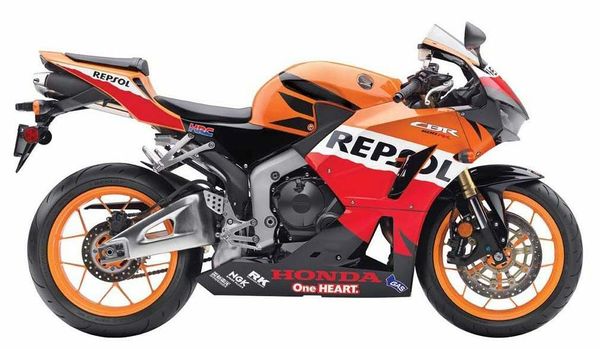 The lineage behind the CBR600RR boasts ongoing track-tested, championship-winning advancements in form and function that have kept this machine at the forefront of the 600cc Supersport class. This newly redesigned CBR600RR delivers stronger engine output for an elevated level of performance, a brand-new front suspension featuring Hondas 41mm Big Piston Fork for exceptional handling and supple action, plus all-new MotoGP-inspired bodywork thats a product of race-tested aerodynamic design. It all adds up to a sportbike that leads the way, whether its at the track or just a fun afternoon ride on your favorite backroads.

Using knowledge gained from the Honda RC212V MotoGP race program, aerodynamic improvements were made to this newest CBR600RR, which shows a 6.5 percent decrease in drag over the previous model. The development and testing used with this all-new CBR600RR bodywork, in turn, led to aerodynamic advancements that have been incorporated into the current RC213V MotoGP racing machine. This newly found aerodynamic efficiency lends itself to more agile handling and improved wind deflection for enhanced rider comfort. Repsol Edition racing colors available for the first time ever on the CBR600RR (standard model only). Standard model available in Red, Repsol Edition or White/Blue/Red. C-ABS model available in Red only. Transferable one-year, unlimited-mileage limited warranty; extended coverage available with a Honda Protection Plan.

 WARRANTY: Because were so confident in the quality of each of our Honda Genuine Accessories, were pleased to offer one of the best warranties in the industry. One-year warranty begins on the day accessories are purchased by the customer.

Here we are again with the revised 2013 Honda CBR600RR. This time, weve ridden out to the middle of godforsaken nowhere to see how the updates work on the track. Honda has always believed that its supersport bikes need to function as decent streetbikes too. The real test will be to determine if that street flexibility hampers full-on track performance.

To recap: new, simpler bodywork surrounds a lightly tweaked engine that aims to give a bit more midrange shove with a smoother throttle response. The chassis gets a bit more attention, with new 12-spoke wheels and Showas BPF fork. The optional ABS system also gets revised tuning to offer improved performance under aggressive riding like on the track, for instance.

The modest list of changes is the new name of the game for OEMs. Gone are the days when an all-new sportbike would appear every other year. In todays economy, the engineers have to make the most of the available platform, so that means smart refinements that can extend the life of a model.

The Ride ChuckWalla Valley Raceway is a relatively new addition to the list of racetracks in Southern California. Unfortunately, its way the hell out east, in the middle of the desert. But its also a nearly perfect track for a middleweight sportsbike, so it was definitely worth the trip to launch Hondas new CBR600RR.

CVR is 2.68 miles of multiple-radius corners connecting a pair of short straights. Because the longest straight is only 1,300 feet long, the track rewards corner speed and smart positioning through the various double-apex turns. Elevation changes are minimal, with the exception of turn 9, which is blind as you come over the small ridge. Again, its a perfect playground for a 600.

Honda also changed things up quite a bit in how the day was run, all for the better. Instead of the usual massive fleet of new bikes, Honda only brought out a half a dozen machines. This allowed each rider plenty of time with Hondas techs, including the full tire-warmer-and-clipboard factory team experience. Having only 6 bikes out at a time also meant we had plenty of room to play. Dunlops sticky D211 GP-A tires were mounted front and rear, guaranteeing that we had plenty of grip.

Unfortunately this was our first outing to CVR, so the first session or so was purely a matter of figuring out which way the track went. Once we got our bearings, we were able to start actually riding the bike enough to see how the updates played out.

The tweaked engine is extremely smooth and offers a great spread of power. Theres enough overrev to make it worth holding on to a gear, but the star of show is how broad the power curve is, giving good thrust even if you want to run a gear high. The fuel injection and transmission both worked with watchmaker precision.

Once we got comfortable, we began to use some of the updated chassis. The new big piston fork is stellar and was perfect all day long. The rear suspension needed most of its available preload wound up, but then promptly got on with the business of going faster. (Cheers to Honda for keeping the easy-to-use ramped preload adjuster.) Thanks to the tire warmers, we never hit the track on cold rubber so there was never a chance to see how the bike might wiggle around on cold tires.

On the base bike, the brakes were fantastic. Plenty of power with good feel, zero slop and not too much initial bite. On the ABS version, things could get a bit looser. The power is still fine, but heavy braking over bumps can get the computer to intercede rather quickly. This strangled brake feel and plateaued your deceleration until the computer decided it was happy again. On the back stretch heading to turn 8 there are a bunch of heaves in the asphalt thanks to the ground-pounding car guys. Run up into those bumps on the brakes and youll have a brief moment where youre not sure if the bike will be ready to turn-in on time. To the CBRs credit, you still make the turn every time with little drama. With more practice on the ABS bike, I doubt it would slow down your laps until you started to get close to race pace. (At least you get a choice. In certain Euro markets, the C-ABS model is the only CBR available from 2013.)

The ergonomics manage to be extremely compact without being cramped, which is a great trick if you can manage it. Adjustable footpegs would be a nice addition when you head back to the street, though. The tank is very narrow and the seat slippery, so its difficult to hold on to the machine with your lower body. And even though my 61 frame was able to move around the bike easily, there was no way to fit behind that tiny fairing.

Overall, the CBR is like many Hondas in the clichéd Goldilocks sense: it perfectly suits every need, to the point where it doesnt stand out in any one area. It may not be as alluring as a Triumph Daytona R or as sexy as the new MV triple, but it combines Honda reliability with the ability to let the rider get on with the job at hand. We honestly took more notes about the ChuckWalla track than we did about the CBR itself. Which makes it perfect.

Whats Good Oh lordy that fork is awesome. Showas big piston design is always a standout feature of any bike that features it and on the tiny CBR it is a revelation. The front end is flawless. Full stop. You never have to worry about the front tire doing anything unexpected. If you do manage to do something stupid, like cook a corner and need to get on the brakes mid-turn, the feedback is so clear that you can feel the tire deflecting on the nanoscopic scale. The rear end isnt as magical, but its still plenty communicative, even during a late-day slide under power coming out of turn 16.

The rest of the bike does what Hondas are (in)famous for: it sort of disappears from your mind. The engine, chassis, the ergos, both versions brake systems, the whole package, it just allows the rider to push harder and harder.

Hondas CBR600RR is the proof that middleweights these days are so good that the major limiting factor is you. It does make you wonder exactly how good those CBR-based Moto2 bikes really have to be to eclipse the showroom version

Whats Bad Wheres the slipper clutch, Honda? If you get off one of the competitors 600s then try to go fast on the CBR, you may quickly learn that your downshifting skills have gotten rusty. The lack of an idiot-proof slipper clutch makes corner set-up a major drag on your laptimes until you reboot your brain.

Other than that, theres not too much to complain about. The seat needs a new, grippier cover. And using ABS on the track is weird until you get used to it. And some people dont like the new headlights. Thats really it.

What Others Say If you havent ridden a bike with [Big Piston Forks], you should. Theyre handling in High Definition.  Visordown

The Verdict The sportbike for someone who doesnt have anything to prove. Hondas 2013 CBR600RR continues a long tradition: easy to ride fast on street or track, flattering the rider at any speed, while still being a dependable street mount that will easily serve during the ride to work. If you dont mind that it is the safe or obvious choice, the CBR600RR will never fail to keep you entertained. Of course youll see plenty of other bikes on the road just like yours, but who cares?

And if you arent shopping for the ultimate race-ready weapon, the C-ABS is a fantastic upgrade, worth every penny. Even if you do head to the track occasionally, the ABS wont disappoint, making it an easy recommendation for the vast majority of potential CBR buyers.