It came with a 120/70 ZR17 front tire and a 180/55 ZR17 rear tire. Stopping was achieved via 2x 310mm discs 4 piston calipers in the front and a Single 220mm disc 1 piston caliper in the rear. The front suspension was a 41mm inverted Big Piston Fork with spring preload, rebound and compression damping adjustability while the rear was equipped with a Unit Pro-Link HMAS single shock with spring preload, rebound and compression damping adjustability;. The CBR600RR Tricolor-HRC was fitted with a 18.2 liters / 4.8 gal fuel tank. The bike weighed just 156.5 kg / 345 lbs. The wheelbase was 1369 mm / 53.9 in long. 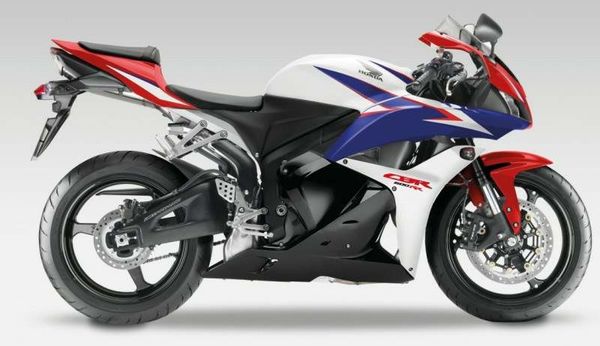 What do you call a middleweight machine thats scooped up virtually every Best in Class crown from industry experts, not to mention World Supersport and AMA FX titles? Easy: the Honda CBR600RR. Or, as Cycle World magazine hailed it in naming the CBR600RR its Best Middleweight of 2009: The benchmark is set. Again.

Hondas tradition of winning continues for 2010, as the CBR600RR returns with its unbeatable combination of MotoGP-bred tech, power, light weight, and handling, highlighted by Hondas revolutionary Combined Anti-Lock Braking System (C-ABS), the first ever on a production supersport motorcycle. And with three trick new color schemes to choose from, youll not only be on the best 600-class sportbike going, youll also be on the best-looking machine as well.

Cycle News 2009 Review Skilled sport riders have historically been quick to discount the safety merits of an anti-lock braking system, viewing it as an unnecessary luxury feature best suited to the sport-touring set. Honda now aims to convince us otherwise, offering optional C-ABS (combined anti-lock brakes) on its 2009 CBR600RR and CBR1000RR models. Having sampled a wide variety of bikes over the years that offered ABS, linked brakes or a combination of both, I could be counted among the sport-minded community content without the added cost, weight or, often, intrusive operation of previous assisted braking implementations. Scattered showers and damp pavement provided ideal conditions in which to gather first impressions of a C-ABS-equipped CBR600RR during the bike's press launch staged at the Honda Proving Center of California. Following a technical brief detailing the system's sophisticated components and operation, I put in a few dozen laps around the HPCC road course, exploring the capabilities of C-ABS. My conclusion? Years spent developing feel and finesse through my right fingers and foot have been rendered obsolete by this system. Grabbing a handful of brake or standing on the pedal results in nothing less than strong, controlled braking action. Although a momentary initial release in braking force is detectable, pulsation is not felt through the controls once the system detects impending wheel lock and enters an anti-lock state of operation. Neither does the chassis buck like a rocking horse, another characteristic of many slow-cycling, grab-release-grab ABS setups. The CBR's ECU-controlled plumbing makes extremely quick and near-seamless adjustments in system pressure. The combined or linked aspect of the RR's setup is a vast improvement over earlier-generation linked arrangements dating back to the CBR1000F and CBR1100XX of the 1990s. There's no sudden front-end dive when lightly applying rear brake at low speeds, allowing riders who dab the rear brake when making U-turns to do so without ill effect. Although Honda spokesmen make no claims regarding the system's effectiveness beyond straight-line use, trail-braking performance is a natural question on the minds of many sport riders. I found the smooth nature of the CBR's ABS and its combined brake effect allow fairly aggressive rear-pedal application mid-corner without unsettling the chassis. I used this technique in a series of left-hand bends at HPCC and was able to confidently check my speed and tighten my line. Another experiment I conducted was trail-braking deep into corners, easing off the front lever while remaining on the pedal down to the corner apex. Although I came away unscathed, I advise readers looking to try this to carefully ease up to this technique as I did. This is not a fail-safe system; it does not rewrite the rules of physics. Following the launch, we obtained a pair of CBR600RRs for further study on the street and test strip, one with C-ABS and another without. Drained of fuel, the standard bike weighed 386 pounds on CW's scales, while the C-ABS model came in at 411 pounds. Both bikes produced 102 peak horsepower and 45 foot-pounds of torque, but the additional 25 pounds accounts for a quarter-mile time 0.2-second off the 10.59 seconds at 129.16-mph pass set by the non-ABS model. That's a fair trade-off, we think, for all but the most track-day-driven. Every CW staffer who has ridden the C-ABS model on the street sensed the feeling of invincibility that this system imparts. We found ourselves actually seeking out slick surfaces, such as paint lines, oil spots or loose sand, to brake across. To a man, we were amazed by how transparently the system adjusts to variations in grip. Looking to back our seat-of-the-pants findings with hard data, we gathered comparative stopping distances from 60 mph on each 600RR. Back-to-back stops were performed on dry, bumpy pavement; we then repeated the test in both wet and dry conditions on a smooth stretch of asphalt. We also measured each bike's stopping distance when only the rear brake pedal was applied, the results of which clearly display the huge advantage Honda's combined system provides. While the shortest stopping distance on dry pavement came aboard the non-ABS bike, safely finding the limits on a bumpy surface required four attempts. Only a second pass was needed on the more predictable smooth surface to beat the ABS. Mulligans, however, are not a luxury one enjoys when faced with a real-world panic stop. The fairly close wet-road stopping distance of the two can also be attributed to the consistent surface condition throughout the stop. Once again, throw in variables such as a deep puddle or a rain-soaked paint line, and there's little doubt that the gap between the two bikes' stopping distances would increase. And remember, this testing was done with a practiced hand/foot at the controls; less-skilled operators will benefit that much more from this smarter ABS. We came away very impressed with what Honda has achieved with its latest-generation C-ABS. After years of riding bikes with anti-lock brakes, we've come to expect compromises in the feel and function during high-performance braking. Honda has made us rethink our position; to do so with a pure sporting platform makes this doubly astonishing. While many sportbike enthusiasts will stand to benefit greatly from the added safety this system offers, the $1000 premium tacked onto a $9799 base price and the 25-pound weight penalty can't be ignored. Having already invested countless miles in developing a keen, if not infallible, sense of human-controlled ABS, I hope Honda continues to give buyers a choice. Source & Cycle World