Power was moderated via the Multiplate wet.

It came with a 120/70-ZR17 front tire and a 180/55-ZR17 rear tire. Stopping was achieved via 2x 310mm floating discs dual four-piston, radial-mount Nissin hydraulic calipers in the front and a Single 240mm disc Single one-piston hydraulic caliper in the rear. The front suspension was a 41mm inverted Showa Separate Function fork (SFF) while the rear was equipped with a Showa single shock w/ adjustable preload. The CBR650R was fitted with a 15.5 Liters / 4.1 US gal fuel tank. The wheelbase was 1450 mm / 57.0 in long. 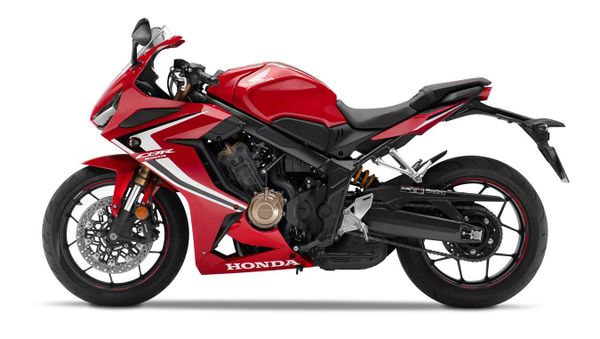 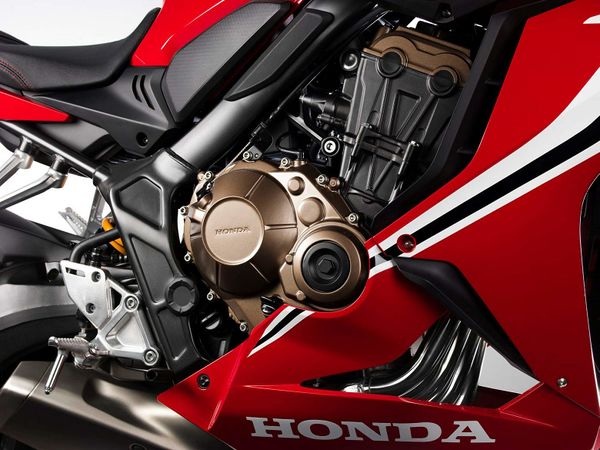 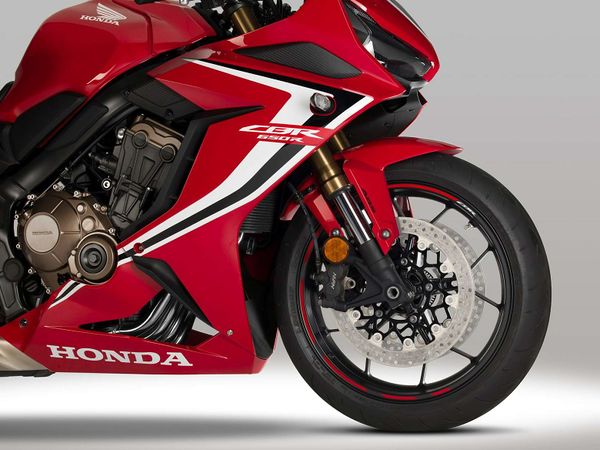 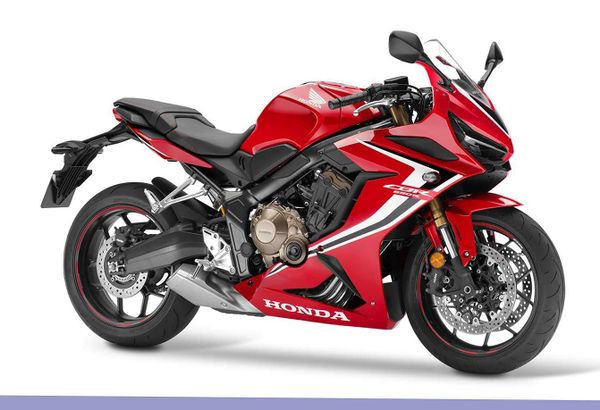 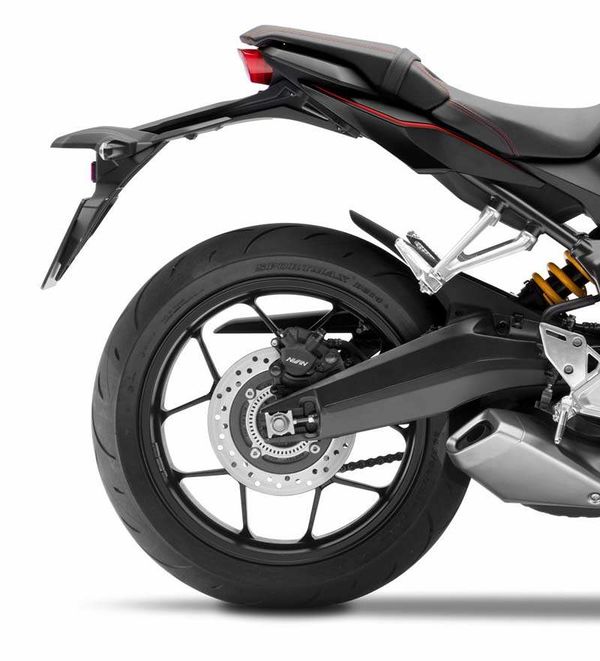 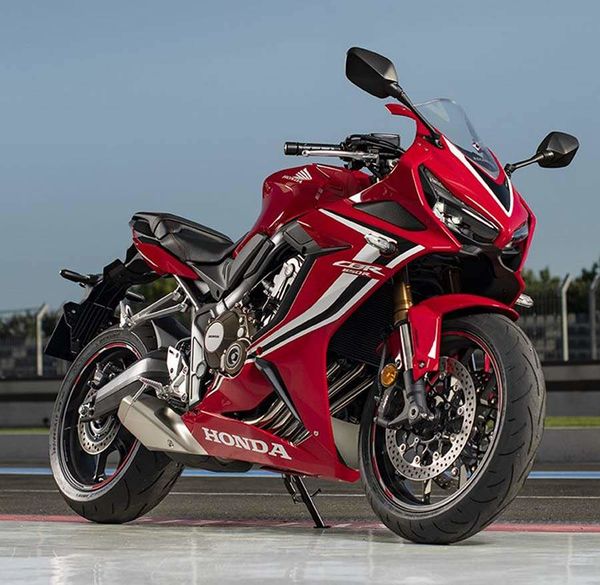 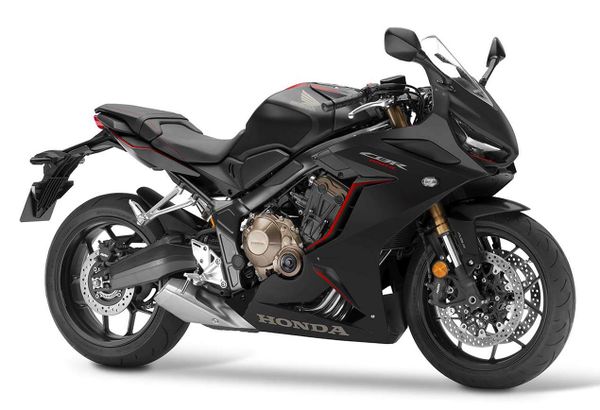 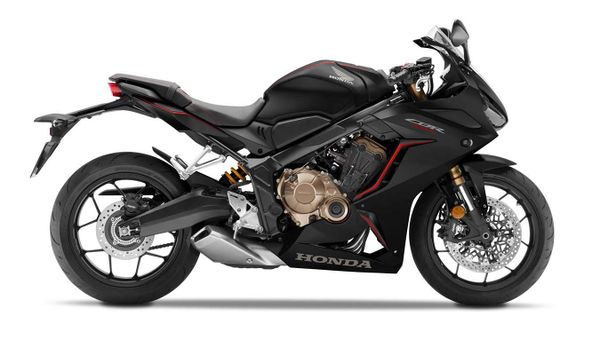 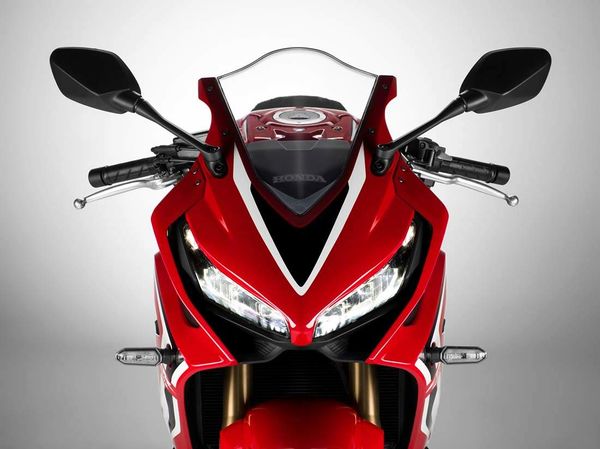 For a certain breed of riders, once youve experienced the high-revving soul of a four, theres no going back. Thats why were so pleased to offer our new CBR650Ra real sportbike built for the way we ride today, and powered by one of the best inline fours weve ever offered. The power is instant, and it builds with an exhilarating rush. Smooth? Nothing can match a four for smoothness, especially a Honda four. The chassis, bodywork, and riding position are all designed to deliver a comfortable street ride, but still hold up when the going gets hot. In short, this bike is just plain fun to ride: light, nimble, and responsive without being a prima donna. Sportbikes should have always gotten it this right. But then, someone always has to lead the way. Another new model name on the Honda lineup is the CBR650R sports middleweight. It features new styling which draws strongly on the CBR1000RR Fireblade for its sharp, aggressive lines and extended side fairings, plus supershort rear section and narrow dual LED headlights. The CBR650R is 6kg lighter than the CBR650F (which it replaces) with a sportier riding position thanks to handlebars repositioned 30mm forward, and footpegs moved both rearward and higher.

The riding position has been adjusted to move the riders weight more forward, and downward. All lighting is LED and the new LCD instrument display now includes a Gear Position and Shift Up indicator. 6kg has been shaved from the chassis compared to the CBR650F, thanks to revisions to the frame, fuel tank and footpegs. A 41mm Showa SFF USD fork, radialmount fourpiston calipers and floating discs are new additions. The wheels are also redesigned.

CHASSIS The steel diamond frame is updated for 2019 with pressed (rather than forged) swingarm pivot plates; its 4.2 pounds lighter than the previous design and uses twin elliptical spars with a rigidity balance specifically tuned (stiffer around the headstock and more flexible in the spar sections) to deliver balanced handling characteristics with high levels of rider feedback. Curb weight is reduced by 11.6 pounds to 458 pounds on the ABS version (measured with all fluids), thanks not only to the lighter frame, but also savings to both the fuel tank and the new super-sport-style footpegs. Also new is the 41mm inverted Showa Separate Function front Fork (SFF). Adjustable for seven-stage spring preload, the single-tube shock operates directly on the curvaceous gravity die-cast aluminum swingarm. Four-piston radial-mount front brake calipers work on 310mm floating rotors, and are paired with a single-piston rear caliper and 240mm rotor. Two-channel ABS is available. The cast aluminum wheels are a brand-new design with five Y-shaped spokes, reducing weight by .97 and 1.2 pounds front and rear, respectively, improving handling by reducing inertia and unsprung mass. ENGINE

5% more power above 10,000rpm, 1,000rpm higher redline Torque delivery smoothed and boosted New intake and exhaust designs flow more gas, and enhance the engine note Honda Selectable Torque Control (HSTC) features for the first time Assist/slipper clutch Easy 35kW conversion available Hondas development engineers wanted to create the purest, most enjoyable midsized four-cylinder performance possible for the CB650R rider, so the 649cc, DOHC 16-valve engine has been tuned to deliver 5% more power above 10,000 rpm, with redline raised 1,000 rpm. Peak power arrives at 12,000 rpm, with peak torque delivered at 8,500. The net result is a motor that spins harder, and for much longer, at high rpm, with a smooth, linear torque delivery that builds strongly as revs rise, and sounds great in the process. Direct cam actuation makes for a compact cylinder head; compression ratio is raised from 11.4:1 to 11.6:1, and the combustion-chamber shape is optimized by use of a revised piston design. The valve train has been reinforced and valve timing revised; iridium spark plugs are also now employed.

Asymmetric piston skirts minimize bore contact, reducing friction. Ferrous spines on the outer surface of the cylinder sleeves reduce oil consumption (and friction) with improved heat transfer, and a silent SV cam chain reduces frictional losses by using a Vanadium coating on its pins. Internal water channeling from the cylinder head to the cylinders does away with most of the exterior hoses. New twin air ducts on either side of the fuel tank feed a larger volume of air, as opposed to the single, central duct of the old model, raising atmospheric pressure in the airbox. They also produce a throaty intake roar. The exhaust now features a larger bore tail pipefrom 1.4 to 1.5 inchesinside the muffler to flow more gas and, with its exit pipe angled upward, to emit an emotional howl. The engine uses a compact internal architecture, stacked six-speed gearbox and starter layout with the cylinders canted forward 30°. An assist/slipper clutch is a new addition and eases upshifts while managing rear-wheel lock up under rapid downshifts. On the ABS version only, Honda Selectable Torque Control (HSTV) manages rear-wheel traction; it can be turned off should the rider choose. Transferable one-year, unlimited-mileage limited warranty; extended coverage available with a Honda Protection Plan. The CBR650R replaces the CBR650F on Hondas lineup, with new, aggressive styling and a racier riding position to offer more highly tuned sports performance for the street. The fourcylinder 650cc engine revs higher, and gets more power and torque, plus Honda Selectable Torque Control (HSTC) and an assist/slipper clutch. A 6kg weight loss means a 8% increase in power to weight ratio. Also new are 41mm Showa SFF USD fork, radialmount fourpiston brake calipers and brandnew instruments. A 35kW conversion for A2 licence holders will also be available. Accessories A range of Genuine Honda Accessories is available for the CB650R: Front Fender Panels, Side covers, Seat cowl (aluminum parts or aluminum inserts) Wheel Stripes