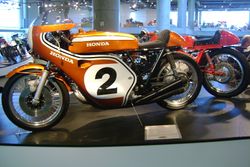 Based on the CB750 street machine, the CR750 was referred to as a "Kit Bike". American Honda Motor Co. published a comprehensive list of high performance parts that would convert a stock CB750K road bike into a very competitive racing machine. These kits were only available to a few selective dealers. One such CR750 took first place in the Daytona 200 race in 1970. Later versions of the kits would convert the Honda CB750F model.

Honda returned to the track for the 1970 Daytona meeting with a machine, which to conform to the prevailing rules, was based on their newly introduced CB750 Four. Success at Daytona offered huge benefits for the company in terms of promoting the Honda CB750 and consequently Honda signed up Dick Mann, Ralph Bryans and Tommy Robb to spearhead the assault. During the race Mann rode conservatively, preserving his machine whilst his major competitors retired with various problems, resulting in Mann taking the victory.

In recent years the ready availability of CB750's and the existence of a number of different race series for which CR750 replicas are eligible has prompted a number of companies into producing items that enable the conversion of the CB into a CR replica. This well known example was built during 1999/2000 and raced over the subsequent six seasons by the present chairman of the CRMC, Roger Bryant. 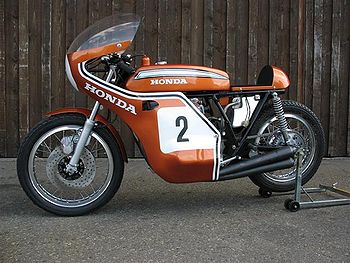 The standard frame was modified to a similar pattern as that employed by the original CR750, incorporating extra bracing and fabricated footrest hangers mounting works pattern cast alloy footrests and a cast alloy rear brake lever. The CR750 type alloy fuel tank is equipped with a flip up fuel cap (with a titanium lever) and Honda fuel tap and is complimented by an alloy oil tank with an anti froth system, a race seat and a copy of the CR750 fairing. The four pipe exhaust replicates the original CR750 system but incorporates internal baffling resulting in a 105db noise output and has recently been repainted and repacked. The front forks utilise revised springs, sourced from the States and have had their damping modified and mount twin callipers, one of which has been modified resulting in both bleed nipples pointing to the front. Cast iron, drilled disks compliment the callipers and braided lines are used. The rear drum has been lightened and both wheels employ alloy rims that have recently been fitted with new Dunlop KR racing tires.

The engine was built with the same attention to detail as the rest of the machine, featuring modified crankcases with the excess alloy removed, a steel cam chain tensioner wheel and a stronger go-kart sourced chain replacing the original cam chain. The K0 series head is equipped with Black Diamond racing valves and springs and a Kenny Harman D grind camshaft. Wiesco two ring pistons are connected to alloy race spec rods sourced from Japan.

During 2007 the machine benefited from new paintwork in the Honda race livery of red with a silver fairing and the seat was recovered. A new final drive chain, clutch lever, clutch cable, plugs, oil filter, clip-ons, grips and a AP Racing brake master cylinder and lever (with variable ratio). All the fluids have been replaced as have the feed and return oil pipes and the callipers have been overhauled and refinished.