The Honda CT125 model is a Enduro / offroad bike manufactured by Honda. In this version sold from year 1979, the dry weight is 108.0 kg (238.1 pounds) and it is equiped with a Single cylinder, four-stroke motor. The Honda CT125 have a frame with front suspension being Inverted Forks and in the rear suspension it is equiped with Twin Rear Spring. Stock tire sizes are 3/19-4PR on the front, and 4/18-4PR on the rear. 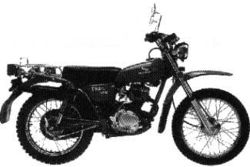