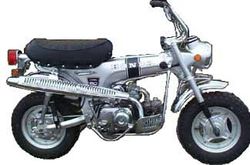 The Honda Motra is a minibike produced in 1982-1983 for the Japanese domestic market.

Honda marketed the vehicle as a heavy-duty recreation bike with a large load capacity.

The Motra has a distinctively rugged appearance, with angular steel tube and panel framework supporting large racks fore and aft. The utility/military style is emphasized by a lack of decorative chrome, and a solid yellow or green paint scheme for all bodywork and wheels.

The Motra's 3-speed gearbox is coupled with a second stage to provide the same 3-speeds with a lower final ratio for low-speed off-road travel in steep terrain.

In 2004 Honda resurrected the Motra's style, but not off-road utility, with the PS250 scooter.