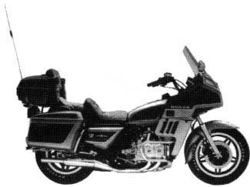 GL1100A'82 - In 1982 Honda featured a luxury model called the Aspencade. and Interstate. It came in two available two-toned colors: Sterling Silver Metallic with Tempest Gray Metallic and Sorrel Brown Metallic with Harvest Gold Metallic. The silver unit was 2-tone silver and black while the brown unit was 2-tone brown and dark brown. It also featured a Type II audio system with a handlebar-mounted control and an on-board air compressor system. The wheels were black reverse comstar. The speedometer showed a 85 mph (135 kph) limit. The turn signal featured a self-cancelling system. The saddle was dual and more pronounced like in the previous year, but the passenger backrest was larger than the Interstate and had storage pouches. The front wheel had dual slotted discs with dual piston calipers. The front tire was a 120/90-18 and the rear tire was 140/90-16. The engine was still 1085cc, SOHC 2-valve, liquid-cooled, opposed four cylinder. The transmission was a 5-speed with a shaft drive. The frame serial number began with 1HFSC022*CA200001 and the engine serial number began SC02E-2300012.