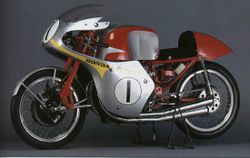 In 1959, Honda announced that they had produced a 250cc four-cylinder along the same lines as the 125cc twin. The idea of a 250 four was not a new one; during 1939-40, Gilera, Bianchi and Benelli had built supercharged 250 fours, the Benelli water-cooled, the other two air-cooled. The outbreak of the war prevented the use of those bikes, and when racing was resumed after the war, supercharging was banned, making them redundant. It was only in 1960, one year after the Honda four was introduced, that Benelli again fielded a 250cc four.

The Honda four, designated the RC160, had the same specifications as the RC142 125cc twin, but the cylinders were now upright instead of being inclined, and the ignition was changed from magneto to battery with four coils. Claimed power output was 35 bhp at 13,000 rpm, with the same maximum engine speed of 14,000 rpm as the twin. The engine had a five-speed gearbox and weighed 58 kg. The cycle parts were nearly identical with the 125cc twin, the wheelbase being longer by 45 mm at 1310 mm, and the total weight of the bike was 124 kg. The RC160 was never raced outside of Japan and, being often raced on unpaved roads, was mostly shown without a fairing and with semi - knobbly tires. 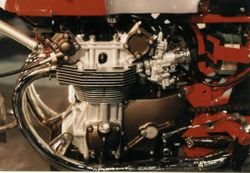 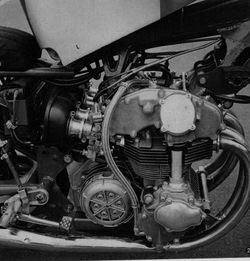