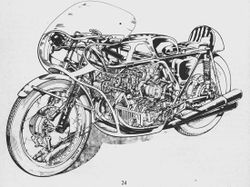 The Honda RC162 was raced in the 1961 GP series. As with the 2RC143, the spine frame is gone, and the new frame is also of the open, double loop type. The frame tubes do not have the same diameter everywhere; where they join the steering head, they taper out to a larger diameter for increased strength and rigidity.

The engine is further developed and although compression ratio (10.5 : 1), valve angles (36 degrees inlet, 40 degrees exhaust) and bore and stroke (44 x 41 mm) are still the same, it now delivers, according to Honda, over 40 bhp at 14,000 rpm. Most sources at the time claim 45 bhp. In view of the difference in speed with its predecessor, the RC161, the latter figure must be true. The cylinders are inclined 30 degrees, and the engine is 80 mm narrower, and to improve aerodynamics no longer has the wet sump – the oil is now carried in a tank under the seat.

The first GP of the season was raced with hybrid 250 cc fours. When the racing season opened, the new RC162 engine were not yet ready, but the frames were. So Honda built a number of hybrids with the new frames but the old RC161 engines, and sent their works riders to the Italian and Spanish spring races to get used to the handling of the bikes. When the new engines were ready, complete new RC162's were sent to Europe, and the hybrids were given to some selected Honda importers to be used by promising young talent in national races. One of those young men was Kel Carruthers. One hybrid ended up in Switzerland and is now in the possession of a Dutch collector. 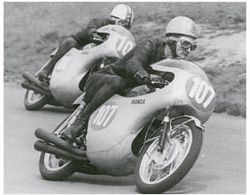 This shows the form of the cams. Ignition timing is 52 to 55 degrees BTDC, fixed.
Retrieved from "https://www.cyclechaos.com/w/index.php?title=Honda_RC162&oldid=156768"
Categories: