From CycleChaos
< Honda S65
Jump to navigation Jump to search 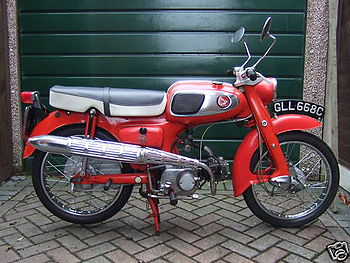 Hot on the heels of its Cub 50-based C110, Honda introduced two small and sporty tiddlers to the US market in the mid-1960s. One was the hugely successful S90 model, which generated a tremendous buzz thanks to its sporty good looks and peppy 90cc performance. As far as Honda was concerned, the S90 was the head of the class, grabbing all the attention. But a few rows back, with its hand raised ever so slightly, was the Sport 65, waiting patiently to be called on.

Like most small Hondas of the time, the S65 (also sometimes known as the CS65) owes much of its upbringing to the granddaddy of tiddlers, the C100 and its sporty C110 derivative. Despite the obvious difference of the pass-through versus the conventional tank-over-frame design, the basic layout and many significant mechanical components are shared between the bikes. This becomes even more obvious when you place the two bikes side-by-side.

And yet, the S65 retains a completely unique look and feel, and an appearance that should endear itself to a small-bike enthusiast looking for that perfect middle ground. It is something more grown-up than your typical pass-through scooter, yet not overtly sporty to the point of being single-minded in its purpose. The S65 really is the smart kid in the class, with the correct answer for nearly every situation.

Everything about the S65 screams out mid-1960s Honda design. Well, maybe not screams — perhaps suggests is a better term. Nothing immediately pops out, because aesthetically the bike just blends seamlessly into a fashion statement of sheet metal and chrome. Walking up to the S65, its general stance impresses. Sitting high atop its useful center stand, the S65’s immediate attitude is one of function first, form second. It is a clean, uncluttered design with everything in its place.

As with other mid-1960s designs, the S65 uses a multi-layer, stamped metal frame incorporating the headstock, spine and rear fender. There are but a few errant spot welds or seams, and most of these are covered up by other components. The rear fender shape is full, accentuated by the thin rear tire and the overly padded two-place seat.

From the side, it is this one-piece frame — complete in original black paint on our 1966 photo bike — that shows the most color, along with the black teardrop-shaped tank straddling the frame’s backbone. Capped on both sides by highly polished chrome accent panels — with standard Honda emblems and ridged rubber knee pads — the tank is mostly absent of the boxy shape found in the earlier C110 model.

Up front, the view is dominated by the sheet metal-encased leading-link front suspension and full front fender, both dressed in the original black body color. The only bits of bright work include a chrome dress-up cap at the bottom of the leading-link enclosure and the small fluted chrome horn cover, with a red painted “65” attached to the body-colored front fascia. A touch of chrome surrounds the headlight housing, as well.

Standard small-bike rolling stock consists of narrow, 17in chrome-rimmed wheels with 36 spokes per rim, wrapped with thin, 2.25in tube tires. A petite yet effective front drum is clamped to the leading arms of the front links, which barely protrude from their encasement. The rest of the front suspensions’ inner workings are hidden away from view.

The handlebar controls provide everything needed to operate the bike with little fuss. A standard twist grip throttle is on the right, as is the thin front brake lever, requiring minimal pull for slow speed stopping power. The clutch lever is on the left, as is the tiny button for the horn, which lets out a bellow heard no more than 20ft away — 10ft if the engine is running. The conventional cable-operated speedometer has markings up to 60mph (in 10mph increments) and is set under the bars in a simple aluminum housing.

The heart of the bike, the 62.9cc air-cooled four-stroke engine is mounted off the front of the monocoque frame, attached by just two slender mounting bolts. Starting from the top down, an espresso cup-sized carburetor pulls air through the center of the frame, down a small rubber inlet boot and into a gently curved, cast aluminum intake pipe. Exhaust gasses are spent out a tightly curving chrome head pipe and through an upswept “scrambler-style” chrome exhaust pipe, fancied up even further by a fluted chrome heat shield. The overall look is one of clean, uncluttered lines that further emphasize the tasteful flow of the bike.

Positioned nearly horizontal, the overhead cam engine has a thinly-finned cylinder head capped with an inspection port much appreciated by the average garage mechanic. The clutch mechanism is cable operated and uses a simple pull-type arrangement located on the right side engine case. The flywheel magneto is located on the left side of the engine, together with the foot-operated one down, three up shifting mechanism.

Throw a leg over the heavily padded and stitched two-tone seat, and you’ll find yourself assuming a surprisingly comfortable riding stance. Even with my 6ft 1in frame, I don’t feel the least bit confined. The bars have a generous pullback and rise that helps to keep aching backs at bay during longer rides. The low seat height and well-placed rubber foot pegs are a nice touch, too.

Foot-operated controls consist of a left-side gear change with both toe and heel pads, and a right-side lever for the rear brake. Passengers will be pleased to find small rubber foot pegs attached to the swingarm and a thin grab strap attached to the seat, just behind the pilot’s backside. As with any bike of this size, two-up riding is best left for partners that enjoy a good snuggle. With the ignition switch and key located up front off the bottom of the steering head, the side-mounted covers — also painted body color — provide access to the battery and air filter.

Like my mother’s 20-year-old Honda lawn mower, the S65 needs but a touch of choke and one good kick to bring it to life. And unlike the more temperamental two-strokes I usually ride, this little thumper doesn’t anger the neighbors with puffs of smoke or high-revving two-stroke tunes. Instead, it just cranks over and settles into a nice little thump-thump idle barely heard through the well-muffled exhaust.

This particular S65 shows just over 3,500 miles on the odometer, which explains why it feels so original in its nature. The throttle is crisp, the control cables still surprisingly taught, and clutch and shift actuation are top notch. Speaking of which, it’s time to grab first gear and head out.

Immediately, I’m confronted with what seems like locomotive levels of torque (relatively speaking, of course). Compared to a two-stroke bike of the same size, the Honda needs very little throttle to pull away from a stop: You just don’t need to worry so much about getting the revs up to make sure you’ll pull away clean. It practically does it for you.

First gear is fairly long, which is nice because it lets you get across an intersection without needing to shift. Once into second, the wave of smooth power propels you forward, yet thanks to the engine’s torque, it can darn near pull you away from a dead stop with just a bit of clutch slippage. It’s a great downtown and parking lot gear, as you needn’t drop down a gear for every 90-degree bend and scream it out in first.

Once out on the road, third gear proves handy, as it can take you from a low rolling speed clean up to nearly 40mph. At speed, the bike feels solid if not a bit too cushy. The leading-link front suspension doesn’t feel properly damped, and it tends to wallow a bit over small irregularities and bumps. No wonder leading-link front suspensions gave way to telescopic units. I do admit though, that it soaks up the bigger bumps like a Cadillac — at least in the front. The back end feels stiffer, so you tend to notice the bike isn’t quite in harmony as you bend it through a medium-speed corner. Ground clearance is great, as is the general feel from the steering, but things just don’t feel harmonious when pressing on, especially when there’s rough pavement mid-corner. You’ll find the front wants to wallow and glide over the bump, while the rear won’t soak it up quite as softly, slightly upsetting your line.

It should be remembered that this bike was intended for occasional off-pavement travel, which is when you’ll appreciate the cushy feel of the front end and the well-padded seat: The bike tracks down gravel back roads with minimal fuss. It wouldn’t make a great dual-sport by any means, but it certainly gets the job done should you have a long unpaved driveway to navigate, or some fun smooth trails nearby.

The gravel-covered orchard trail I’m riding takes me to a small two-lane road just north of town, with posted speed limits of 45mph. Luckily, the S65 is more than capable of keeping up with traffic. Wind out third gear using all 6.2hp, pop it into fourth gear, roll back on the throttle, and sure enough the needle is climbing past 45mph and edging past 50. With enough road, and a bit of a tuck, the advertised 56mph top speed is easily attained.

Luckily, the little drum brakes — and fast spinning four-stroke — provide ample deceleration from elevated speeds. No, you won’t be nipping under Nicky Hayden on the brakes entering the Corkscrew, but at least you won’t have to throw out a Fred Flintstone anchor at every stop sign.

The rest of my ride takes me back into town along small surface streets, soaking up potholes, barely noticing manhole covers, and generally admiring the fact that this little machine is a great all-rounder. It has proven totally dependable, great fun and surprisingly practical for riding on today’s faster-paced streets. At the end of the day, it comes as no surprise that Honda got it right with the S65.