It came with a 3.00 -21 front tire and a 4.00 -18 rear tire. Stopping was achieved via Single disc in the front and a Single disc in the rear. The front suspension was a Telescopic forks while the rear was equipped with a Swinging arm. The XLR250R was fitted with a 9.0 Liters fuel tank. The bike weighed just 125 kg. 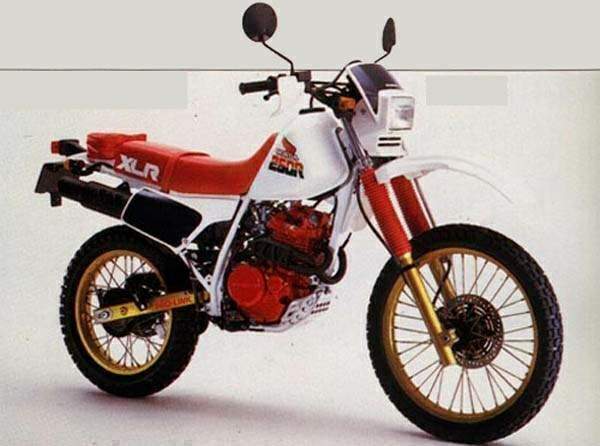 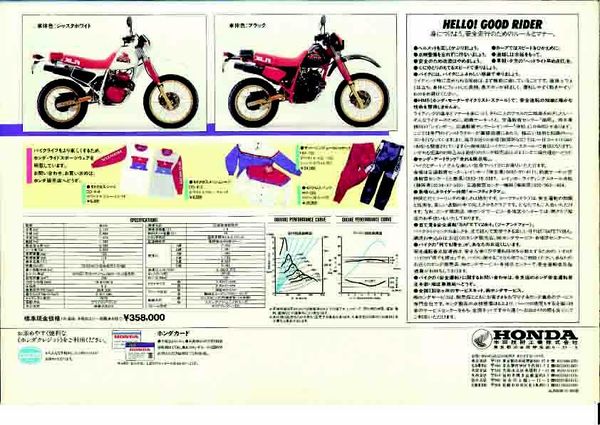 A NX250, and you can quote me on that!" shouted an elated test rider after a photo session on the 1989 XLR250R Baja. Loyal Honda dual-sport enthusiasts have lamented the loss of the old XL series and many are shying away from the street-oriented NXs, because of their low front fenders and full fairings, but what are the 250cc dual-sport alternatives? The KLR250 Kawasaki is more dirt-worthy than the NX, but it's water-cooled and lacks low-end power.

Those handy with wrenches could buy an XR250R and make it street-legal, but Honda has already done just thatfor the Japanese market. Because of its thousands of square miles of off-road heaven, Baja is the rage in Japan, and each year several Japanese teams spend big bucks to race the Baja 500 and 1000. Al Baker, XR research and development consultant for Honda, sells highly modified XRs to the Japanese (and European) teams and provides pit support for the racers; he also exports a large percentage of his breathed-on XRs back to Japan. Baja is so big to the Japanese that Honda developed a street-legal XR250R and sells 10,000 units a year there. Because of Baker's close relations with Honda Japan, he was able to work out a deal where he can import the XLR250R to America. Honda enthusiasts now have an alternative to the NX or converting an XR250R.

Motorwise, the XR and XLR250 are identical. Honda's radial four-valve combustion head is controlled by a single overhead cam and breathes through a foam filter, 30mm Keihin and two-into-one exhaust headers. The 249cc mill puts out a claimed 28hp at 8500 rpm and puts the ponies to the ground via a six-speed transmission. An external oil cooler and automatic decompression system are also standard.

Unlike the XR, the XLR does not have a removable exhaust diffuser (Japanese environmental standards are strictly enforced) and the machine sports an emissions canister. It also lacks the manual decompression system for starting and has a 428 drive-chain with cushioned rear hub to quiet chain noise. Overall gearing is also taller at .375 to the XR's .2708. Although the XLR and XR suspension components look identical, the XLR has travel limiters in the forks and shock, and there are no compression adjustments up front or rebound adjustments out back on the XLR. Travel is just under 9.5 inches and 8.7 inches for the front and rear, respec-tiveiy.

Instead of the squeak-o-matic rear drum, the XLR has a rear disc brake! The swing-arm is the same length as the XR unit, but there are changes for the caliper mounts. It also comes with passenger pegs. IRC Trail Winner tires handle traction duties and the front brake is identical to the XR unit. For street legality, trick-looking dual high-/low-beam headlights (12-volt, 35-watt), taillights, brake lights, tucked-in turn signals (on rubber mounts), a horn, two socket-mounted mirrors, brake-light switches, resettable speedometer/odometer (in kilometers), steel gas tank and the usual array of idiot lights grace the XLR. With all these add-ons, the bike weighs only 11 pounds more than its XR cousin.

The aforementioned items make the XLR street-legal in Japan, but many American states require that the headlights remain on without the motor running. Riders in these locales would have to hide a small battery in the large fender pack and run the positive wire to the ignition switch to pass this test. Also, this is a "gray market" machine sold as an off-road bike, but the owner can take his manufacturer Statement of Origin to the DMV and register the bike for street use with minimal effort. Hey, it's a lot easier than building it yourself and then getting it registered, as Japan's emission standards are tougher than ours.

Since the motors are identical on the XLR and XR, Al Baker's XRs Only has all sorts of performance mods in stock for the XLR, as do many other aftermarket companies. If you know someone who has bought an aftermarket silencer for his XR250R, you can inexpensively gain more performance by swapping mufflers and removing the XR diffuser for more flow, but noise output increases.

HOW DOES IT WORK?

Because of the taller gearing, the XLR doesn't come out of the hole as strong as the XR, but tenth-mile drag times are only 0.3 seconds slower than the XR. With this gearing, the XLR is 3 mph faster than the NX250's top speed of 84 mph. Obviously, the taller first gear doesn't allow the XLR to plonk down quite as low as the XR, but the wider spread (due to the taller ratio) allows the XLR rider to wind each gear longer.

On the street, the IRC tires are excellent and they do a decent job of gripping hard-packed and moist dirt, but they (like most dual-sport meats) don't bite well in sand or mud. However, cornering is very good, and the lower seat height also comes in handy when dabbing over tricky sections. The XLR doesn't soak up whoops or jumps as well as its pure-dirt brother, but it doesn't do anything really ugly. Due to the added weight on the triple clamps, steering is a tad sluggish, but the bike is very easy and enjoyable to ride.

On the street, long downhills or fast fire roads, the no-fade rear brake is worlds better than the smallish XR rear drum, and brakesliding into corners is very predictable. In fact, we prefer the XLR over the XR on hard-packed fire roads, due to the lower CG, taller gearing and more predictable tires and brakes. As long as you respect the comparative limitations in whoops and jumps, the XLR performs like its XR brethren and is a very dirt-worthy dual-sport. It flat blows away the NX250 and outshines the XLs in all situations, and it offers more torque and agility than the Kawasaki KLR250.

Honda's meant-for-Japan XLR250R is the best 250-class dual-sport we have ever thrown a leg over, and a few mods could make it the ultimate lightweight street-legal dirt bike. It's quick, nimble and reliable, and parts (except the final drive) are interchangeable with the XR, but the performance and uniqueness do have their costs. The bike retails for 439,000 yen in Japan, which converts to $3540 at today's exchange rate, plus the buyer has to pay freight (around $300 from Japan to your door) to America. That puts the cost at $700 more than the NX and $1,000 above the KLR. Is it worth it? You bet!