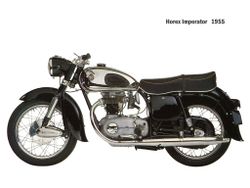 Horex was founded in 1923 in Germany. The firm's most notable model was the Regina, a 350cc OHV single, starting production in the late 1940s. The 400cc Imperator, a stylish and technically advanced SOHC parallel twin first introduced in 1951, featured telescopic of leading-link forks, twin-shock rear suspension and a fully enclosed drive chain.

Horex began to hit problems in the 1950s, partly due to their tragic 250cc Rebell scooter, causing the factory to close in 1958. In the 1970s, Friedel Munch and fellow motorcycle enthusiast Fritz Roth attempted to revive the name with a 1400cc turbocharged four, based on Munch's Mammut and a series of small-capacity two-strokes. More recently, Honda used the Horex name on a single-cylinder 650cc engined sporster called the Osca, which was built and sold in Japan.