How to read a motorcycle tire

It's a rotten feeling. You look down at your tire, and there's no denying that those nice deep grooves have become a shadow of their former selves. It's a goner, and it's getting worse with every mile.

As you look around your local motorcycle shop for a new tire, you see all sorts of letters and words on the sidewalls. Would you believe just about everything you need to know about a tire, including when it was made, is contained there?

It's really not that difficult to decipher the black art of tire designations, and knowing what you've got makes you a well-educated consumer-which is never a bad thing. 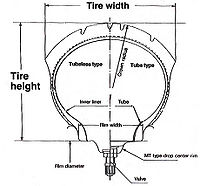 First off, there's those big numbers and letters that may read something like 130/90 16, or MT90 16. These numbers indicate the size of the tire, and the rim it's designed to go on. In this case, these are both the same size tires.

How can we tell?

An example of the coding found on a common tire.

Let's start with the first series of numbers, 130/90 16, otherwise known as the metric designation. This is the most popular nomenclature today and it's practically a standard in the automotive world.

The 130 designates the tire's width in millimeters, measured in a straight line through the tire from one edge of the tire's tread to the other. The second number, 90, is a bit trickier to understand. This represents the aspect ratio between the tire's width and its height, or how tall a tire is in relationship to its width. Simply put, the higher this number is, the taller the tire will be. In this case, the tire is 90 percent as tall as its width, or 117mm.

The last number, 16, is the tire's rim diameter expressed in inches.

The width on some tires may be expressed in inches as well, but usually the aspect ratio is left off.

The other series of numbers and letters, MT90 16, represents the same tire size, but it's expressed in an alphabetical code. M means the tire is designated for motorcycle use, T is the tire width code, 90 is the aspect ratio and 16 is the rim diameter.

Interspersed with these sizing numbers, you're likely to find other letters that appear as such: 160/70VR 16, 170/60R 16V, or in other combination. These two extra letters indicate speed rating and tire construction.

Each letter in the speed rating notes the maximum speed a tire can sustain under its recommended load capacity. For instance, V is equivalent to a maximum speed of 149 mph. Because this rating system was created in Europe, the increments per letter are in 10 kilometers per hour.

The next letter, R, indicates the construction used within the tire's casing. R stands for radial construction and B means belted bias.

The next number or letter you may encounter, after the tire size, is the load index. This is the weight the tire is capable of handling when properly inflated. It's usually expressed in either a numerical code, or a letter code. Most manufacturers will also spell out on the sidewall what that maximum load is so there's no guessing—you'll find it usually listed with the tire's maximum air pressure.

It's good to note here that you should only fill a tire to the motorcycle manufacturer's recommended level. Besides under inflation, one of the biggest mistakes people make with their tires is to overfill them to the maximum level indicated on the sidewall. This leads to poor handling and premature wear. If in doubt, either consult your owner's manual, contact your local dealer, or go to the tire manufacturer's website. Most include the recommended pressure for each motorcycle, along with other tire options. And be sure to measure pressure when the tire is cold. Measuring hot will skew the numbers.

One of the more critical marks on a motorcycle tire is the rotation arrow, or arrows. Today's specialized tires generally have a tread pattern that must go in only one direction. Some manufacturers even state that their tread patterns are designed to disperse water, and by mounting the tire backwards, they won't work.

The other big reason for noting wheel direction has to do with the manufacturing process. The tread rubber is initially a flat strip that's cut to length, at an angle, and then spliced together with the two ends overlapping, creating a hoop. Under acceleration, a tire mounted backwards will try to peel back this splice. The opposite is true for the front wheel, where directional forces are reversed under hard braking.

Another mark to look for when mounting a tire is a painted balance dot, or dots. Most tires are pre-balanced by the manufacturer. They will then put a mark on the tire indicating where the valve stem should line up.

Born on date, and wear's the tread?

Other useful information on the tire's sidewall includes its manufacturing date. Look on the side for a raised block with four digits; it's usually next to the U.S. DOT tire identification number. The first two indicate the week of its manufacture, and the last two are for the year. For example, 1702 would indicate the tire was manufactured in April, 2002. Prior to 2000, there were only three digits, with the last one indicating the year.

Some tires may have raised triangles, or the letters TWI, to show where the tire wear indicators are in the tread. When these marks are equal to the tread, it's time for new tires.

Other information on the sidewall is usually spelled out; "tubeless" or "tube type" may be substituted with the letters TL or TT respectively, and the tire ply, composition and materials used may also be spelled out.

Now you know all you need to know to have an intimate conversation with the black hoops around your rims.