For riders who want a supermotard that is lightweight, gritty and agile, and have the unmistakable sound and feel of a two-stroke engine, the engineers from Husqvarna have launched the 2011 MY SMS 125. At its heart lies a liquid-cooled, two-stroke, 124cc, single cylinder lump paired to a six-speed manual transmission. In addition, it comes standard with an Electronic Carburetion System which significantly increases its power output and makes for a more gritty machine, despite its rather small displacement.

The 2012 MY Husqvarna SMS 125 has been designed for younger and less-experienced riders, and it can tackle both paved and unpaved roads. At its heart lies a liquid-cooled, four-stroke, 124cc, single cylinder engine mated to a six-speed manual transmission, and can produce 15 horsepower and 12 Nm of torque. Other standard features worth mentioning would be the ECS electronic carburetion system, the Marzocchi inverted front fork, as well as the high-end Sachs rear monoshock. In addition, it comes with a modern, LED tail light and a dedicated graphic system that makes it appeal to the more young among Husqvarna fans. 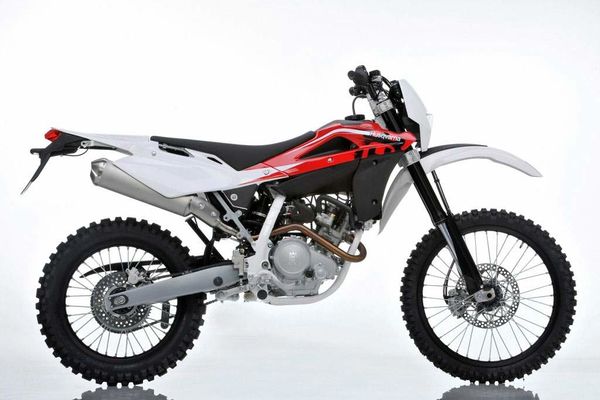 The 2013 MY Husqvarna SMS 125 has, at its heart, a liquid-cooled, four-stroke, 124cc single cylinder lump mated to a six-speed manual transmission, and can produce 15 horsepower and 12 Nm of torque. It has a modern, EVS electronic carburetion system, which improve its overall performance, and helps reduce fuel consumption. In addition, the fuel tank is mounted under the seat, which lower its center of gravity and thus, makes for a more maneuverable machine. It can tackle both paved roads and off-road tracks, thanks to the standard wire-spoked wheels.