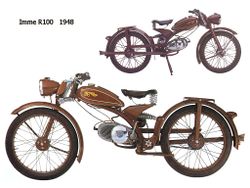 Imme is the name of a German light motorcycle, which was developed 1948 by Norbert Riedel. For the time at that time the futuristically gestylte motorcycle exhibited some trend-setting design features. The name is derived from the manufacturing plant Immenstadt.

Engineer Norbert Riedel worked in the 1930er years as a technical designer at Ardie, Victoria and Triumph in Nuremberg. It won the competition for the construction of a starter engine for the aircraft turbine of the Messerschmitt ME 262. After the war it developed a motorcycle and developed in Immenstadt a production enterprise. At June 1949 the series production of the Riedel R 100 began. The very scarcely calculated price of 775 Marks and high costs of guaranteeings provided for financial difficulties. After the comparison in the autumn 1950 the development of the scooter Till were stopped.

The two-cylinder model developed by Riedel, R 150 could be brought for these reasons no more on the market. In the autumn the Riedel AG bankruptcy announced 1952.

For its motorcycle Riedel used only one pipe diameter due to the shortness of material after the war. From this it manufactured the complete framework incl. guidance head and rocker camp, which einarmige parallelogram fork as well as the einarmige rear wheel rocker, to whose end the engine was fastened and which served at the same time as exhaust. The suspension of the rear wheel was supported by a lying central feather/spring at the crossbar. The two identical wheels were exchangeable. The Riedel R 100, so the official name, carried 4.5 HP out from 99 ccm capacity. The consumption of the oxide-red painted, only 57 kg heavy machine was per 100 to km with 2,3 liters.