It came with a 100/90-17 front tire and a 140/90-15 rear tire. Stopping was achieved via Single 226mm disc 1 piston caliper in the front and a Drum in the rear. The front suspension was a Telescopic forks while the rear was equipped with a Dual shocks. The EL250 Eliminator was fitted with a 11 Liters / 2.9 US gal fuel tank. 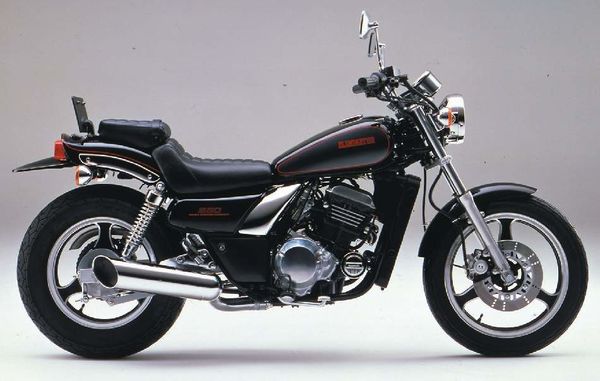 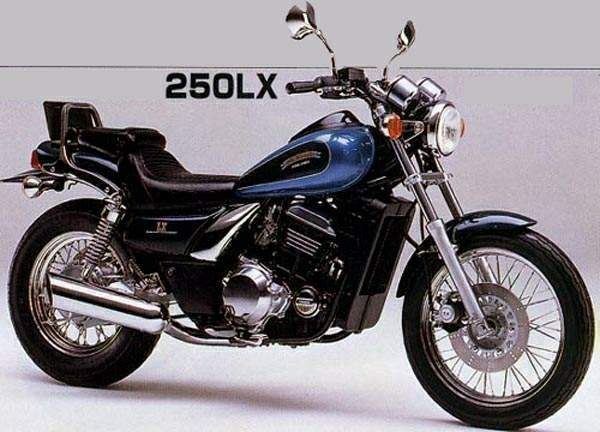 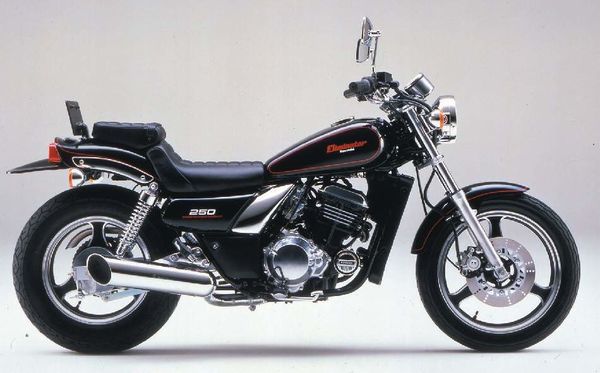 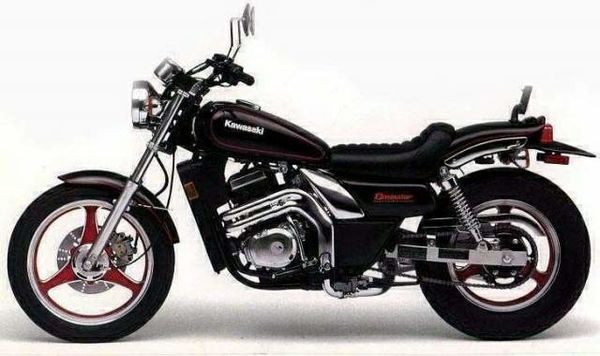 The Kawasaki EL250 is no ordinary mini-custom. Its engine begs to be thrashed, it doesn't look cheap and - shock horror - the brakes work

MINIATURE HARLEY REPLICAS are traditionally dumping grounds for old engines, older switchgear, and brakes from hell. They are bought by newly qualified riders wanting to ease their way into motorcycling without spending much. The new EL250 is Kawasaki's attempt to make them spend more. All the advantages of a mini-custom are there, but with fewer hassles and more quality. Like Suzuki's GN250 and Yamaha's SR250, the EL gets a low seat for easy paddling, a low centre of gravity for easy balance and a relaxed riding position. But unlike the cheap and cheerfuls, it gets modern fixtures and fittings that make it easier to live with. Instead of a wheezy old single-cylinder engine that only just manages to pull four gear and struggles to go over 70mph, the EL gets an eight-valve parallel twin that used to power the ZZ-R250. In still air and on flat ground it can push the EL up to an indicated 80mph. This is performance beyond the wildest dreams of the GN and SR. A following wind will send the EL hurtling towards the 90mph mark and only steep hills beat it down to below 70. The speedo takes the edge off the feeling of outrageous speed because the needle never gets past 11 o'clock  in one of motor-cycling's greatest feats of optimism it is calibrated to 120mph. The price of such neck-straining speed is the EL's inevitable buzzi-ness. A bore 20mm greater than the stroke means on its way to a redline of ll,800rpm the EL sounds like a racing trill phone. It's as Harley-like as granny's Datsun Cherry, but the modern engine gives the EL a large dollop of practicality. The daily 30 mile trek into work was not a sluggish nightmare. Although there's little gumption in the bottom half of the rev range, car-beating performance can still be had thanks to the six-speed gear box. Scurrying up and down the gears doesn't fit in with the long low image, but it means the EL250 can pull from 60mph to 70 briskly enough to get past lorries without terrifying rider and lorry driver. Equipment is just as practical. The main beam emits enough light to see where you're going at night -novel on a mini-custom - and instead of dodgy switchgear that's been kicking around Japanese warehouses for 10 years, the EL has clean, efficient switches that have only just been phased out on ZXRs. Indicators are push to cancel, idiot lights are useful, and the choke is bar-mounted.

Starting from cold, the choke operation itself is odd. The motor starts instantly and idles fast but after thirty seconds slows and soon sounds as if it's about to stall. Knock off a bit of choke and the idle holds, but is so fragile that a sniff of clutch is enough to stall it. The ride to work starts with 11,800 revs ai irritable neighbours. Handling is solid. The low cent of gravity and adequately stiff frari mean the EL feels stable throuj smooth slow and medium bene Only when the straight is lor enough for you to get up to 80mf does the corner at the end becon worrying because of the EI increasing vagueness. Bumps too can be a problei because of the short-travel, unde; sprung rear-end. At first it feels ; though the twin shocks are roc hard, as hard-edged bumps jolt th rear alarmingly. But the slow spee ride is so comfortable that it w; more likely caused by the shock bottoming out. Unless there's a pillion perche on the tiny rear seat, the effect i not a worry. The EL lets you si back, push you bum right back t> the fattest part of the plush saddle use the pillion perch as a sissy ba and relax. Corners breeze pas smoothly, the fat Dunlop tire gripping well in the dry and slith ering predictably in the wet. To go faster and get the peg scraping all you do is hunch ove: the front and point the EL firmly With oodles of trail and a heac angle of 29 degrees, the EL needs ; vigorous shove to get into a turn but once settled a peg can carve i smooth furrow. Watch out for left handers though, because the geai lever is low and close to the peg so it's easy to get your foot trapped between tarmac and lever. The single-piston front brake works well enough to squeal the tire under 60mph and the rear drum brake is equally reassuring. A major attraction of mini-customs for test fresh riders is the looks. After the GP100 of pre-test days, anything over 125cc looks sexy, but the EL is a particularly inticing proposition. For a 250, it is long and low - "drag strip image" says the Kawasaki brochure hopefully  and with the sun behind it the EL can look almost Harley-like if you squint. Close up, there are too many Japanese touches for the EL to be anything like. The radiator is swathed in black plastic but is too big to be missed. The engine is partially chromed but the rest is a stylistically disappointing matt black. The sidestand is a tinny black stub instead of a long silvery scythe. But compared to the likes of the white-wheeled CB250, the metallic flake paint EL is raw sex. And in the eyes of the motorcycle-illiterate it probably is a Harley-Davidson. It is expensive though. At £3150, the EL is £385 more than the CB250, £851 more than the GN250 and only £149 less than Suzuki's GS500. On paper the EL struggles to compete with such cheap and cheerfuls. In the showroom though, there's no competition. The EL has the solid quality and big bike appearance that even the GS500 can't match. It has the potential to become the XV535 of mini-customs. Source Bike 1993