Power was moderated via the Wet Plate. 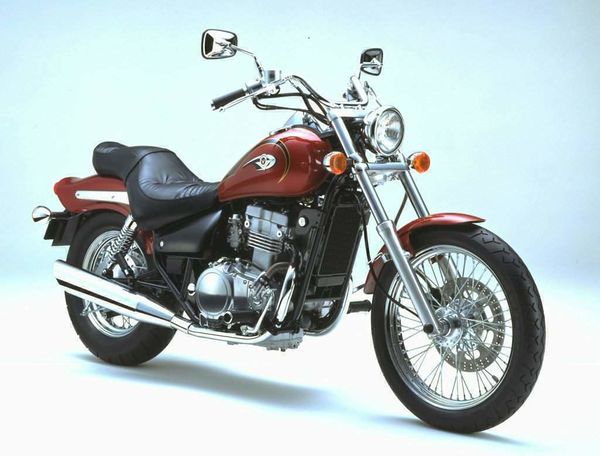 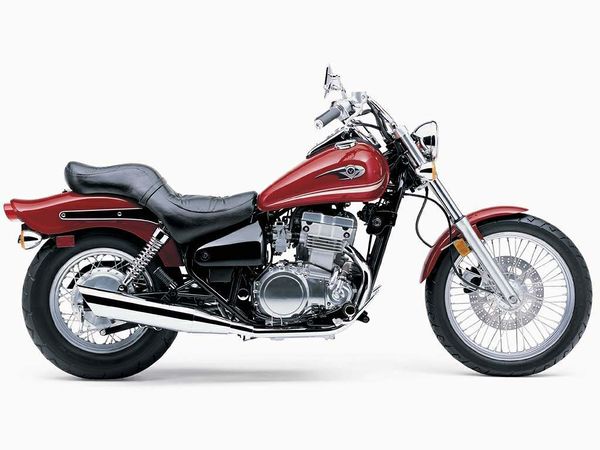 A sporty engine in a cruiser? Not logical Captain. But is it fun? John Mitchell goes Star Trekkin across the universe (well Gloucestershire anyway  and enough of the awful Vulcan jokes)

It looks long and lean, with a real American feel about it. The EN uses the same water -cooled motor as the proven GPZ500S, so it cant be bad.

The bike was pretty much immaculate, apart from a little corrosion around the engine where road salt had penetrated the engine lacquer. The only thing that worried me was that there was oil dripping out of a pipe underneath the engine, this turned out to be coming from an over-lubricated air filter sponge. The Kawasaki had just had the front discs replaced, and the drive belt adjusted, which was nice.

I put the key in the ignition, which was situated just behind the radiator, and the lights came on, and the indicators glowed at me, this puzzled me for a moment. Its OK, thats normal the seller said (Editorial Note: this is down to it being a US import  Stateside regulations require this), so I fired her up, off I rode with the back wheel just leaving the car park as I reached the first roundabout. The bike felt quite nimble but I seemed to be going straight over the roundabout, as opposed to round it. The bike briskly reached the speed limit, and before I knew it, I was approaching another roundabout and was struggling to find the brakes and gears that were somewhere near the front of the bike.

The motor was quite smooth, thanks to the balancer shafts, which I am told is the reason why the tickover is a bit lumpy, but I think it gives the bike a bit more character. I quite liked the feet forward riding position, but the bars were adjusted too low, I am just over 6ft tall, but most of the length is in my back. With my feet foreword and my arms pointing down I felt like The Karate Kid practising the final contest winning blow.

The handling is strange at first but after a few miles I was leaning further and further over. The rear drum brake took a bit of getting used too as well, it just didnt seem to be working well at all, but by the end of the journey I was starting to make allowances in braking distances to compensate there poor performance. Apart from the bars being too low the riding position is really comfortable, the plush and supportive seat helping a lot.

Adjusting the belt-drive is an interesting experience. The Vulcan does not come with a centre-stand. The hand book says to put a 10lb weight on the seat, then adjust the belt accordingly!

To improve rider comfort when upping the pace, I had a Highway Hawk screen fitted by Tredworth Motorcycles, which worked a treat and kept me safe from the worst the weather could throw at me.

After six months ownership, only had a few minor quibbles; the lack of a rev counter being one them, with the bike having 6 gears it took a bit of getting used to. The gearbox itself is another gripe it is a bit clunky, especially when its cold, but as most cruisers come with a shaft drive, you would have the same problem.

The Vulcan is a nice bike to ride, it is economical, returning around 70mpg in cruise mode, and a bit less on motorways. The bike has a wide and comfortable seat, for both the rider and pillion. I have only managed to cover 70 miles, but I think I could go further, at least to the tank range, which is about 120 miles.

The Vulcans motor is quite flexible. Its no ball breaking V-Monster, but then again, its easy to drag out of the garage unlike some of the big cruisers I could mention. But dont forget it is powered by the same lump as the GPZ500S (albeit in slightly detuned state), so you can still have lots of fun at the Traffic Light Grand-Prix.

Because of its weight, or rather the lack of it, the EN500 handles well, but best not to push the bike too far on uneven roads as the long forks and wheel base will not like it one bit. You might as well spend your money on one of those rides that are always sat outside the supermarkets; the experience will be the same. I think the handling would be improved by fitting a new front tire, as its worn in an odd shape. This is due to the steering geometry of custom bikes, which can make the front end feel a bit light, and the Vulcan loves skipping over road markings, especially on cold tires.

All in all I was pleased with the Vulcan/EN500, its economical, cheap to insure and tax, being a relatively small capacity engine. With the increased interest in road speed, owning a cruiser makes perfect (and licence protecting) sense.