The engine was a liquid cooled twin, four-stroke. A 62.0mm bore x 49.0mm stroke result in a displacement of just 296.0 cubic centimeters. Fuel was supplied via a double overhead cams/twin cam (dohc).

It came with a 110/70-17 front tire and a 140/70-17 rear tire. Stopping was achieved via single disc. hydraulic. two-piston calipers. in the front and a single disc. hydraulic. two-piston calipers. in the rear. The front suspension was a 37mm hydraulic telescopic fork while the rear was equipped with a uni-trak with 5-way adjustable preload. The Ninja 300 was fitted with a 4.5 Gallon (17.03 Liters) fuel tank. The wheelbase was 55.31 inches (1405 mm) long. 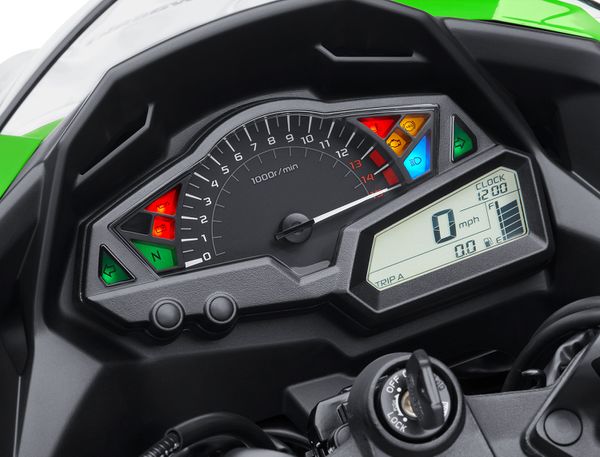 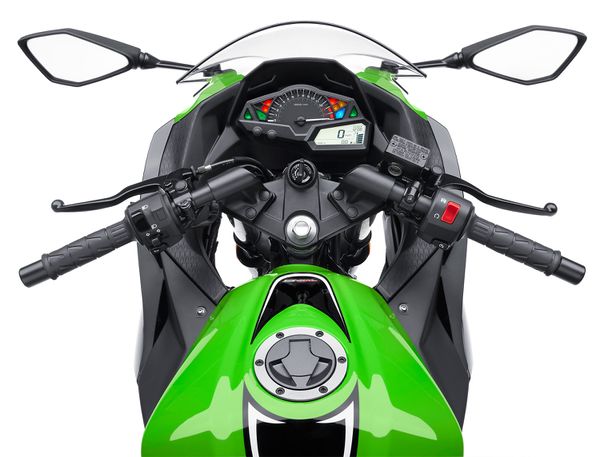 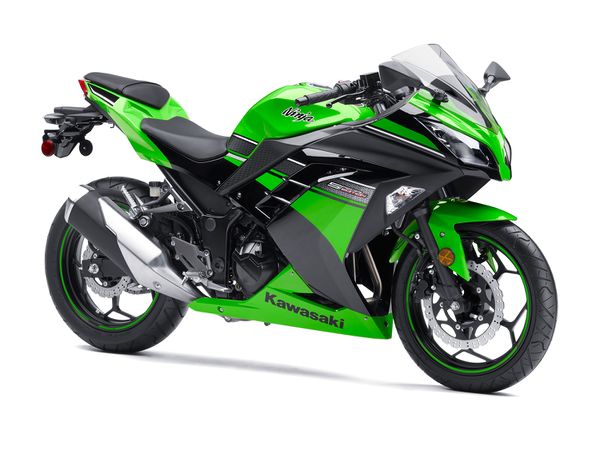 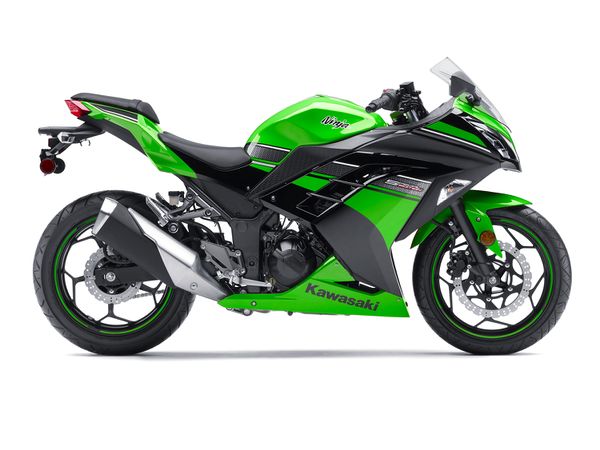 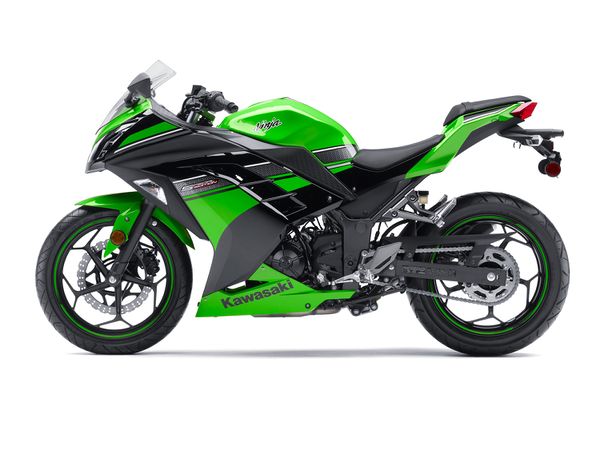 The 2013 MY Kawasaki Ninja 300 SE comes with a bundle of accessories worthy of the name Ninja. From a color matched seat cowl which is factory designed to perfectly match the colors of one's bike, to a brand new taller windscreen with 3" more of bubble style wind protection, all specially designed for the Ninja 300 SE. Only available in a stylish lime green/ebony paint job, the 296cc 6-speed Ninja will surely attract all the attention one would want from a bike of its class.

It has also been equipped with a seat narrower in the front, helping whoever is at the helm to reach the ground more quickly.

The motorcycle can also be purchased with optional ABS. 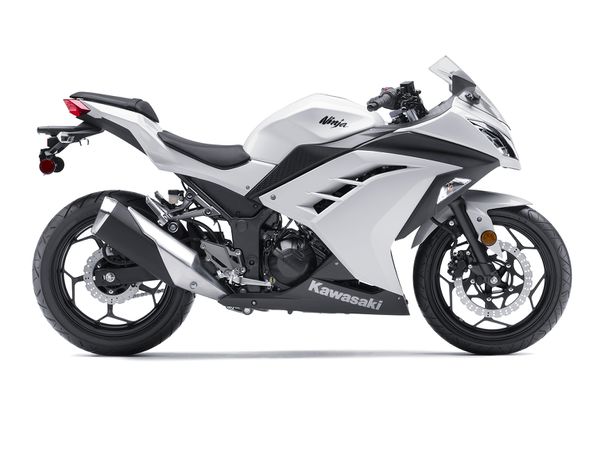 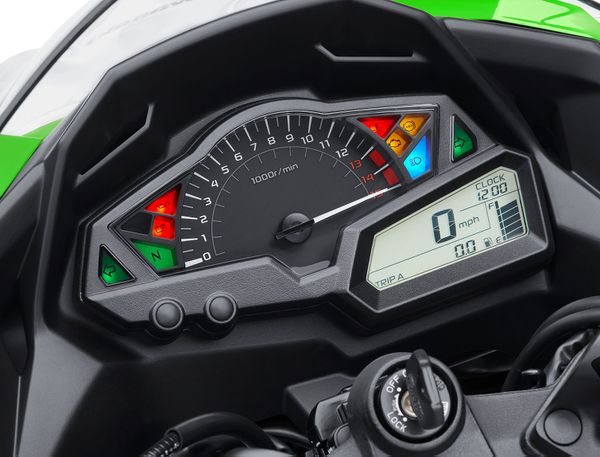 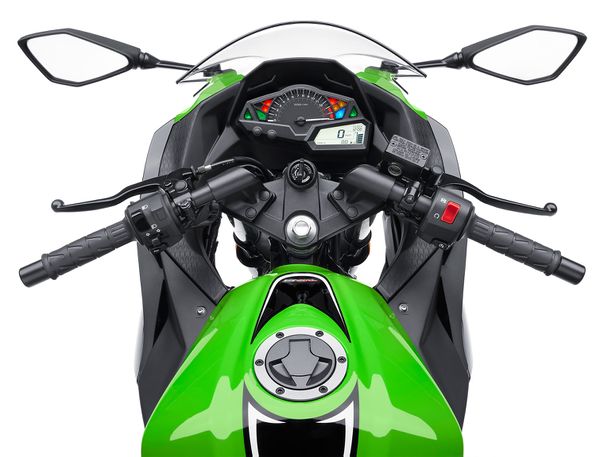 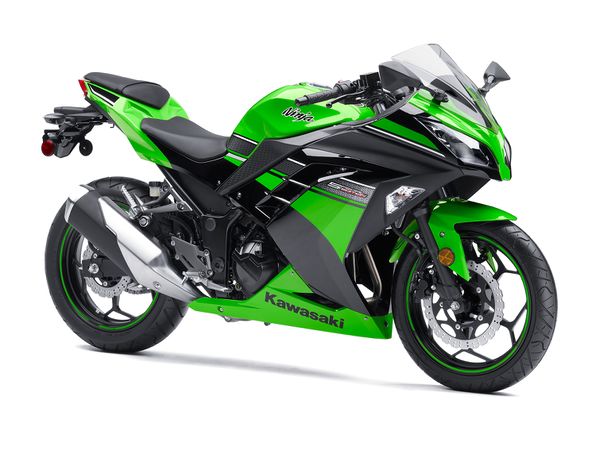 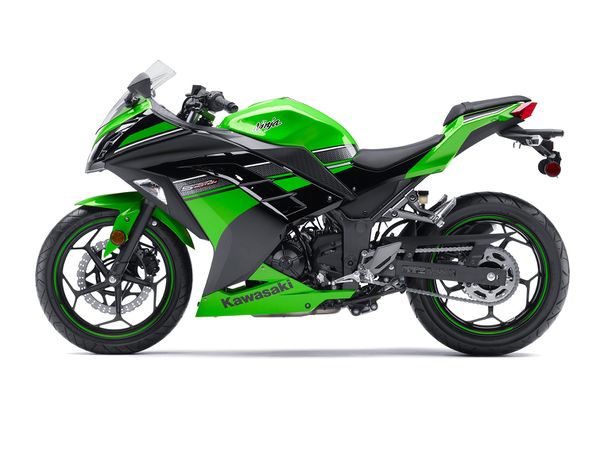 The new Kawasaki Ninja 300 is a step-up from the successful Ninja 250 and was designed to compete with the 2013 MY Honda CBR300. It features a new 296 cc 4-stroke parallel twin engine with acceleration to rival some sportbikes from much bigger classes, thanks to its redesigned Digital Fuel Injection. A newly engineered F.C.C. clutch enables more power handling capability with less effort. A supersport-inspired bodywork based on the ZX-10R makes it more appealing than its smaller predecessor.

A frame with newly designed high-tensile steel main tubes, which are 150% more rigid, makes the bike more nimble. The new 10-spoke 17-inch wheels have a more pleasing design, plus the rear wheel is 1/2" wider to increase stability and add to the aesthetic appeal, too. The Ninja 300 can be purchased with optional ABS. 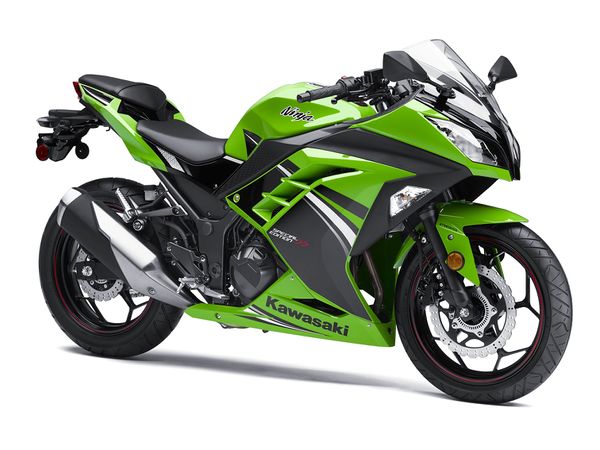 The 2014 MY Kawasaki Ninja 300 Special Edition features a rigid chassis, made out of high-tensile steel to make the steering more precise. It was designed to be equally stable at high and low speeds.

Using a 37mm telescopic fork and a Uni-Trak rear suspension linkage, the bike is comfortable enough to take on one's daily commute to work, but still keeps that sportbike feeling that runs in the Ninja family.

The seat has also been designed with comfort as a decisive factor. It is narrower in the front, and also it slants forward a bit, which, combined with the slightly raised handlebars, make the Ninja 300 easier to ride.

This special edition can also be purchased with optional ABS. 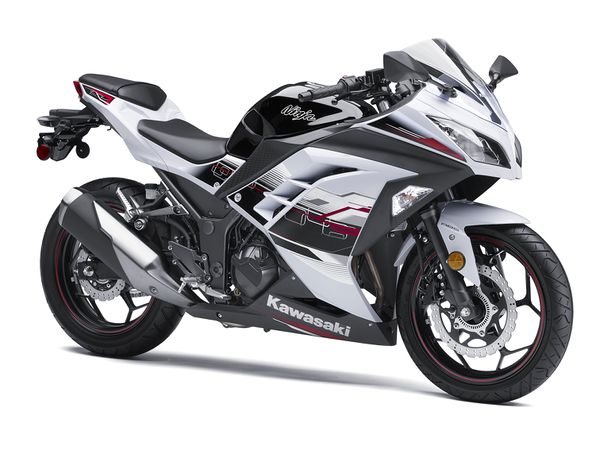 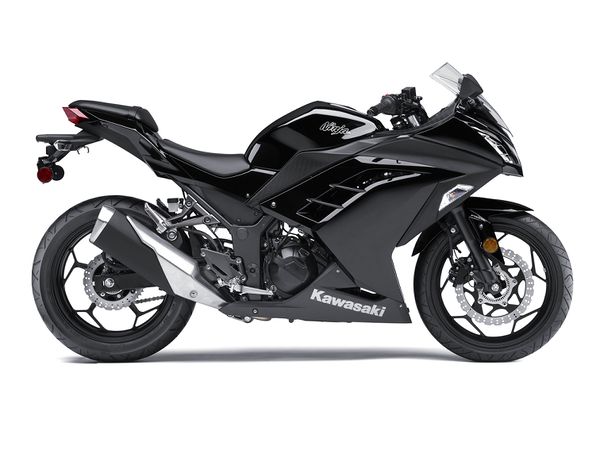 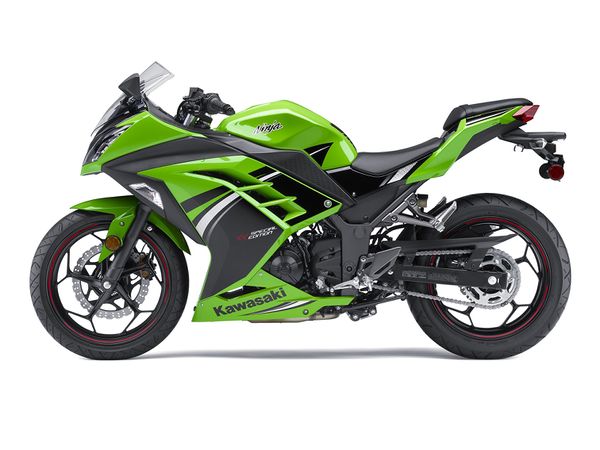 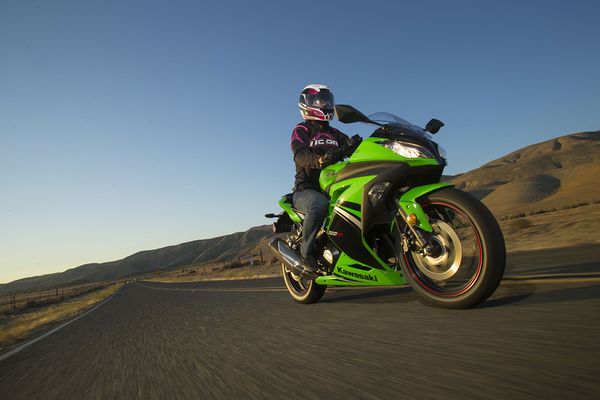 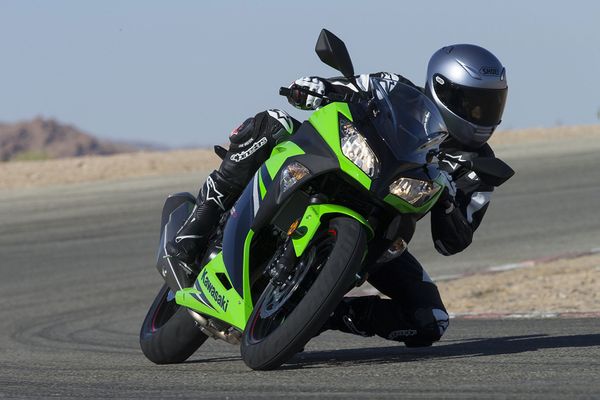 The 2014 MY Kawasaki Ninja 300 comes with a 296cc parallel-twin engine that produces 39 horsepower and 27 Nm of torque, making it a fairly powerful bike in its class. The power is transferred to the wheel through a six-speed transmission that uses an F.C.C. clutch with assist and slipper functions, specifically designed to minimize wheel hop when using strong engine braking.

It comes with 10-spoke 17-inch wheels that can be equipped with sportier tires to increase the overall handling of the bike and also add a plus to the aesthetics.

A feature to be mentioned on the Ninja 300 is the Kawasaki Air Management System (KAMS), which channels the hot air from the radiator through the bottom of the bike and away from the rider.

The model is available for purchase with optional ABS. 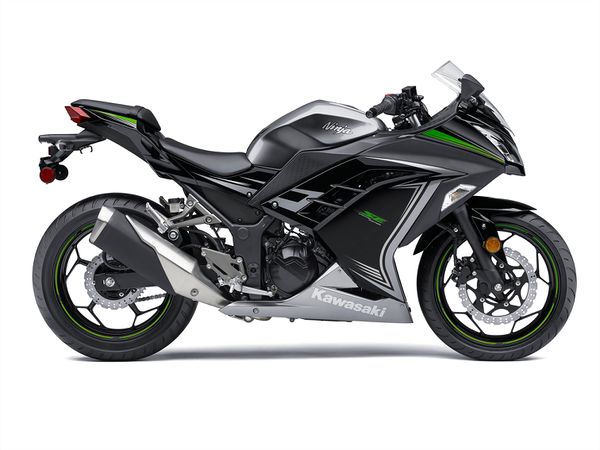 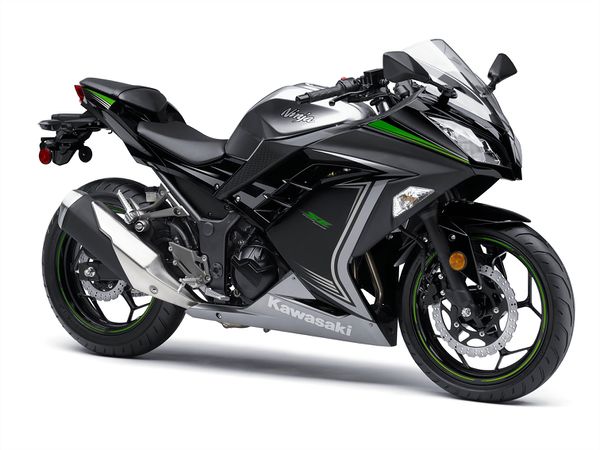 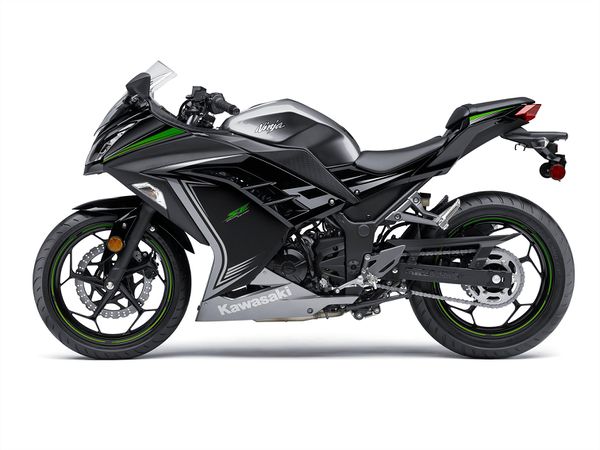 Available for purchase only in the USA, the Special Edition of the 2015 MY Kawasaki Ninja 300, comes with special colors one can't get elsewhere. This new combination of colors and graphics makes it look more unique, giving it a plus on the visual side, compared with the base-model 300.

On the tech/engine side, it has the same specs as the 2015 My Kawasaki Ninja 300, packing a manual 6-speed transmission mated to the known parallel twin power plant.

This special edition can also be purchased with optional ABS. 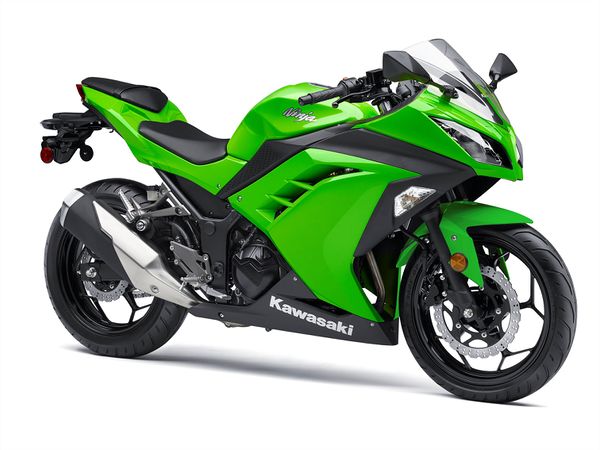 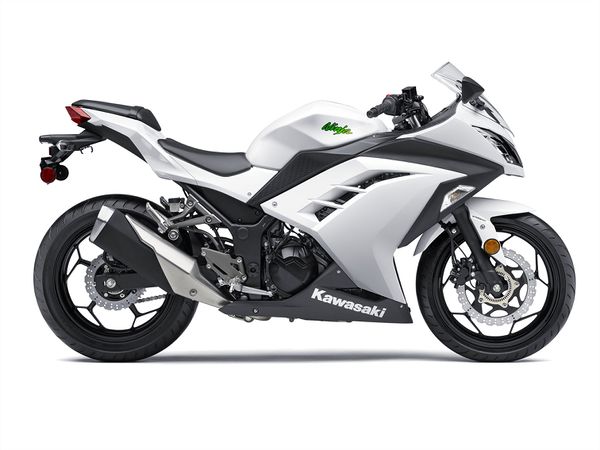 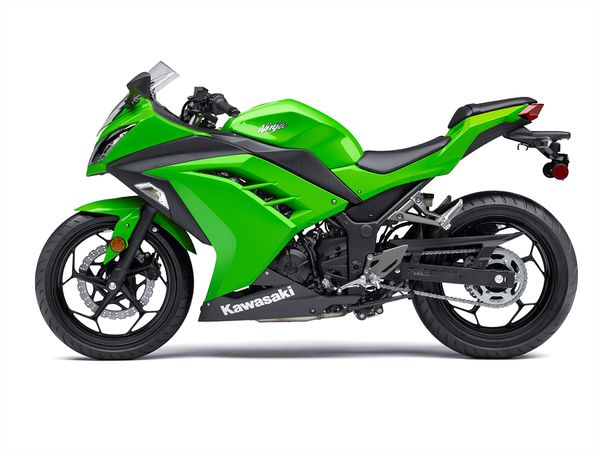 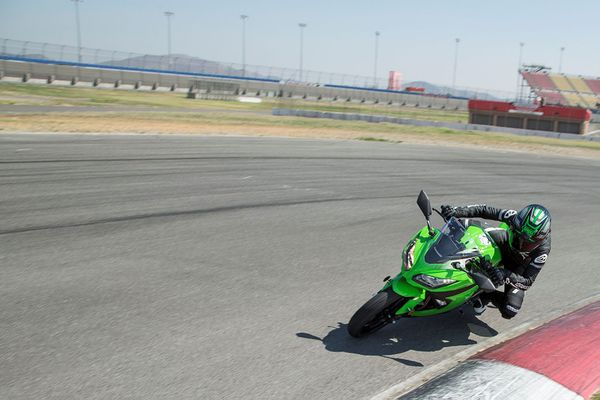 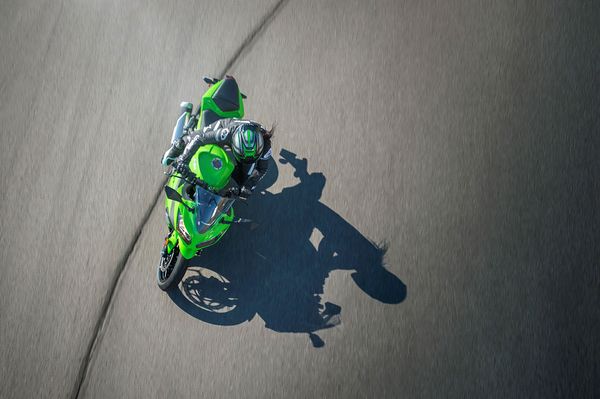 The 2015 My Kawasaki Ninja 300 sports a 296cc parallel-twin engine, capable of producing 39 horsepower and 27 Nm of torque. Still, it retains the sportier, more aggressive overall look thanks to its Ninja-inspired bodywork.

It has a F.C.C. clutch with assist and slipper functions, making it a very user-friendly two-wheeler, with strong Ninja family heritage. The slipper function reduces the effect of back-torque when downshifting while the assist function makes the lever feel lighter, thus easier to operate.

For this year, the Ninja 300 comes with updated colors and graphics, and with a pair of new Dunlop TT900 GP tires.

The model is available for purchase with optional ABS.