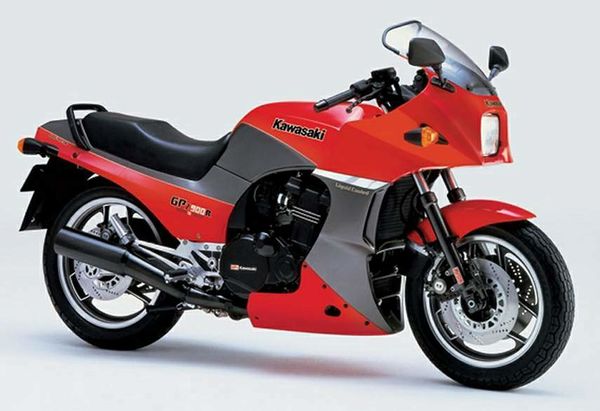 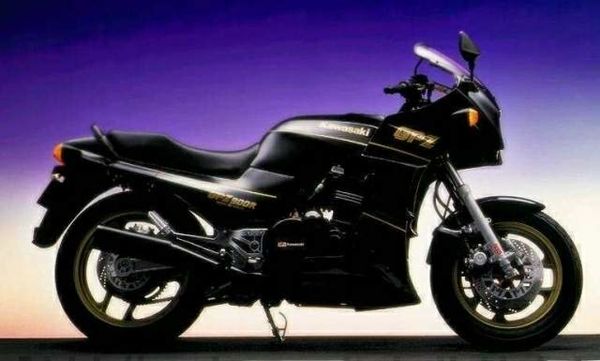 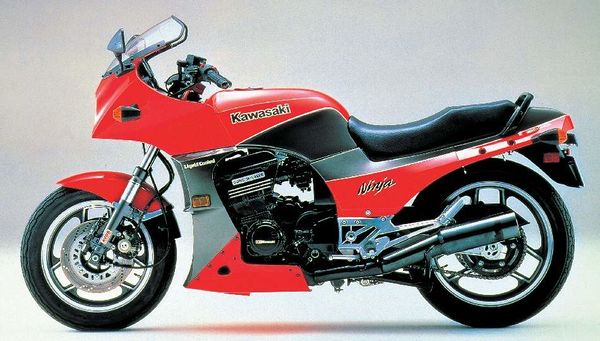 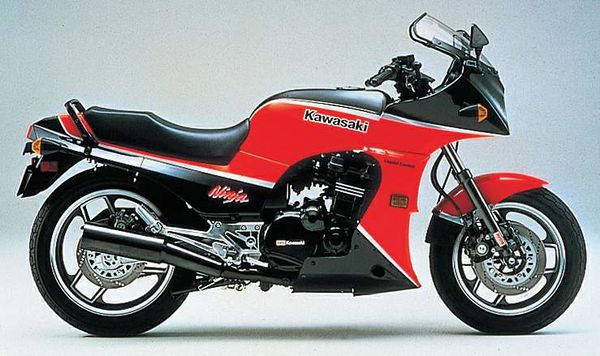 In 1984, the new GPz 900 Ninja was the cutting-edge of performance, with an all-new liquid-cooled four-cylinder driving its cams from the left side instead of the middlethe better to lean over farther in corners and produce top-end power that put the big air-cooled multis of the day to shame. Thirty years later, the old beast reminds us why Kawasakis used to be thought of as unbreakable but a bit crude: On serial #0001, black primer shows through the red paint on part of the fairing and many of the stickers are just that, stuck on. None of it mattered; in 1984, the median Baby Boomer was 29 years old and making decent bank working the second shift at the Budweiser plant in Van Nuys, California, cruising the boulevard after work in Oakley Blades with a mullet for a helmet. We called the new Yamaha FJ1100 introduced the same year the fastest, most competent all-around liter-class sportbike of them all. But when it came time for Ten Best in 1984, the Kawasaki was it: This isnt your usual Japanese sportbike... this is a hard-core performance motorcycle aimed directly at the hard-core performance rider. Heres the thing about the original Ninja, though: It was hard-core before the core became so hard. Never mind the period hyperbole, your Open-class streetbike of 1984 was also a pretty good daily ride/sport-tourer. The old hausfrau Ninja weighed 546 pounds with half a tank of fuel (2.9 gallons); the new ZX-10R that Tom Sykes World Superbike champion bike is based upon is nearly 120 pounds lighter. Thats an entire Dani Pedrosa.

Review Kawasaki says it is a new generation of street bike, and it is probably right. But the ZX900 also harkens back to a lost era, an era that ended, ironically, with the advent of the Kawasaki 903 Z-1. The Z-1 ushered in a decade of street bikes that were broadly targeted, fat in the powerband and, despite unprecedented power and performance, somewhat short on personality. The ZX900, on the other hand, is aimed straight at the sporting rider who takes power and cornering very seriously. Even its name, Ninja, takes you back to the era of Kawasaki's A1 Samurai and A7 Avenger, bikes that, like the ZX900, were aggressive, high-strung animals. In those days, just the word Kawasaki could start a heated debate about whether a 350 Avenger could really beat a 650and many 650 riders would turn a corner or ride out of a parking lot before the issue could be resolved by combat. In 1984, the debates will swirl around the question of whether the Kawasaki ZX900 Ninja can give away 100 to 250cc and still be competitive with monsters like Honda's VF1000 Interceptor and V65 Sabre, Suzuki's GS1150 and Yamaha's FJ1100. Some of the answers to such questions emerged during our testing, and the Ninja stands as a very strong contender in the Superbike War of 1984. With V-4s popping up everywhere in Honda's '84 lineup and Suzuki and Yamaha likely to add or introduce V-4s by '85, it must have been tempting for Kawasaki to join the parade. Instead, Kawasaki chose to advance the in-line four, introducing an engine which is at once conventional and exotic, an engine that is completely competitive with the latest V-4s. It is, as Kawasaki says, an in-line four for the '80s. Kawasaki considered sixes and V-4s before settling on "the proven configuration." Kawasaki cites several advantages for the in-line four: evenly spaced power strokes, near-perfect primary balance, simplified service, relatively few moving parts, low mechanical losses and efficient combustion flow. To these qualities, Kawasaki added several innovations to make a power plant that is completely competitive with the V-4s that have received so much attention in the last couple of seasons. Most of the innovationslike generators and other accessories mounted behind the cylinder bank, four-valve combustion chambers and liquid-coolingare new only for Kawasaki. However, they have been assembled in a combination and configuration that are thus far unique and offer many advantages. Two factors more than any others distinguish the ZX900 design from other in-line fours. The first is liquid-cooling, a common inclusion on other engine configurations but thus far conspicuously absent on in-line fours. By using a water-cooled rather than an air-cooled design, Kawasaki could slim things down. The wet-liner system is quite compact, as is the aluminum cross-flow radiator. The radiator holds just three-quarters of a quart and weighs under three pounds. In addition to the radiator, the cooling system includes a thermostat which actuates at 187 degrees F, an electric fan which turns on at 207 degrees, an overflow tank under the right side panel, and the water pump, which is driven by a gear from the clutch. Coolant is pumped into the front of the cylinder block, up through it to the head and then to the radiator. Kawasaki cites improved cooling as the leading factor enabling it to "■ use a stiff 11:1 compression ratio and still accept unleaded fuel. The more consistent engine tempera*ures also enabled the designers to specify tighter piston clearances in the pressed-in cylinder liners and reduce piston-ring tension. Liquid-cooling coupled well with the decision to mount the drive chain for the camshafts at the left end of the crankshaft. The cam-chain-drive location provided many potential benefits in addition to simplifying the process of water-cooling. It enabled Kawasaki to further slim the engine by reducing the number of crankshaft bearings. It also provided easy access to the cam-chain adjuster, and, according to Kawasaki, the resulting even spacing of the bore centers made symmetrical arrangements of ports, sub-ports and combustion chambers possible. The resulting short, straight combustion paths "significantly improve breathing efficiency," according to the designers. The cam chain itself is a "silent" link-plate type with a hefty 7.94mm pitch. It's tensioned by Kawasaki's new constant-load tensioner and drives a pair of hollow camshafts, each riding on five plain-bearing surfaces in the head and each with four lobes. A reusable rubber gasket seals the cam cover. The head gasket is laminated steel, and the base gasket is steel sheet. The ZX900 is Kawasaki's first street bike with four valves per cylinder, a feature which adds a bit of complexity and has become commonplace among the high-performance street bikes of the other Japanese firms. Until now, Kawasaki has generally managed to setor at least matchthe standard of performance without this extra bit of complication and expense. Four-valve combustion chambers had been tried extensively at Kawasaki, but they weren't deemed worthwhile until nowwhen there is an entire engine designed to utilize them. As discussed in the accompanying development feature, Kawasaki felt that effective use of four-valve combustion chambers relied on more than just a new head design. Each pair of valves is operated by a forked, two-finger cam follower. Valve lash is regulated with threaded adjusters. The valve sizes are 29mm on the intake side and 24.7 on the exhaust side. Duration and lift are the same on both sides, 290 degrees and 9.3mm, respectively. The included valve angle (the angle of the valves relative to each other) has been decreased sharply compared to recent GPz models. At 34.9 degrees, it is over 25 degrees narrower than the 750 or 1100. The steep angles enabled Kawasaki to make the combustion chambers compact and to shorten the ports.

Single-shock Uni-Trak suspension supports the rear of the bike and features the latest version of Kawasaki's rising-rate suspension linkage. The shock is located fairly low, and has provisions for adjusting air pressure and rebound damping. Both the air filler and the four-position rebound-adjusting mechanism are reached by removing the right side panel, which is retained by a single Phillips screw. The rear axle is supported in the massive swingarm by eccentric-cam chain adjusters, and the swingarm rides on needle bearings. An important innovation is Kawasaki's Automatic Variable Damping System (AVDS) anti-dive in the front suspension, which automatically increases compression damping in response to the speed and distance of front wheel movement during suspension compression. It works in two stages, with the fork spring applying pressure and restricting the AVDS valve to increase compression damping after the fork has compressed two inches. As the fork continues to compress, the increase in damping-fluid pressure compresses and it is progressively forced open. It sounds a bit like the anti-dive system that we complained about on the Suzuki GS1150 two months ago. However, this one (except for the fact that the plumbing is rather ugly) met with acclaim from our testing staff. "The fork feels best when it is about a third of the way through compression, and it continues to work well to full compression," say one rider's notes. "While braking over rough surfaces, the anti-dive system cuts out soon enough to allow supple response. The front end always feels glued to the ground." Another tester called it "the first anti-dive that stays out of your way." The brakes themselves get top marks. They are very predictable and precise and require little effort to obtain maximum effect. Even on the one occasion that we got the front brake to fade (during a photo session when the rider was accelerating full-bore past the camera, grabbing a handful of brake to stop, then turning around and repeating it perhaps 120 times), it still had enough power for hard two-finger stops; the lever just moved in closer to the bar before beginning to stop the bike hard. When cool again, the brakes recovered completely. A new pattern of holes is drilled in this bike's discs, and sintered-metal pads are used for fade resistance and wet-disc braking power in wet conditions. Kawasaki uses standard single-piston, single-action calipers with the express purpose of reducing unsprung weight. You can also see weight-saving measures in the rear caliper's aluminum stay and in the absence of the covers usually placed over the rear caliper's less attractive components. In addition to the effective AVDS, the balanced, air-assisted front fork features 38mm stanchion tubes, the biggest ever used on a Kawasaki sport bike. The tubes were set 10mm farther apart than the GPz1100's to accommodate tires even wider than the low-profile, tubeless 120/80V16 Dunlop F17 that comes on the ZX900. Rigidity was obviously a major concern in the front end. The fork sliders have large, effective axle clamps, and there is a unique aluminum fork brace styled into the front fender assembly. The brace loops around the rear of the wheel and acts as a bracket for the front and rear sections of the fender. The 16-inch tire diameter is big news in itself and has become de rigueur on serious sport bikes in 1984 to aid in responsive handling. In combination with modest wheel-base (58.8 inches) and front-wheel trail (114mm) measurements and plenty of weight on the front wheel, it makes for the most responsive, accurate-handling big bike this magazine has ever tested.