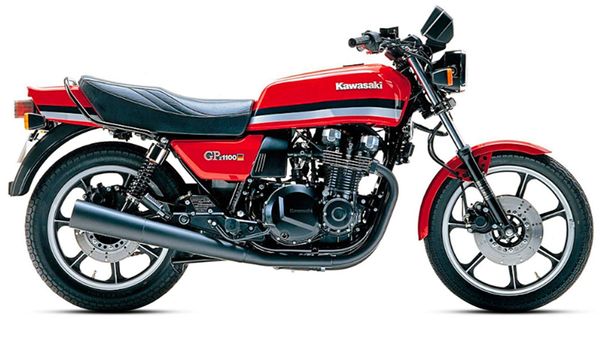 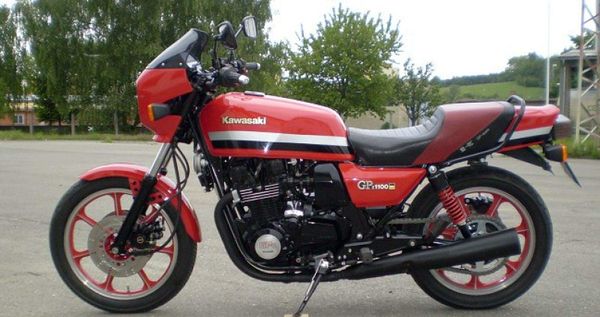 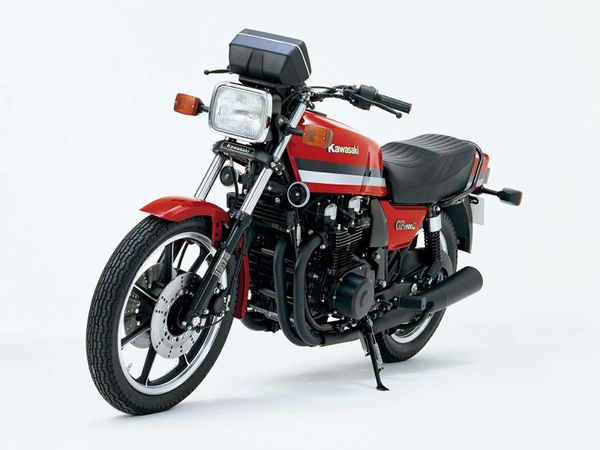 The Kawasaki GPz1100 B1 and B2 are motorcycles that were manufactured by Kawasaki in 1981 and 1982 respectively. Both models featured a four-cylinder, two-valve air-cooled engine design with a capacity of 1,089 cc producing 108 bhp (81 kW) in the B1 and 109 bhp (81 kW) in the B2.[1] This engine was an evolution of the powerplant used in the previous Kz1000 series, itself descended from the Z1. In 1983 the GPz1100 was completely revamped in both cosmetic styling, suspension and updated engine. The model number changed to ZX1100A1.

Curses on the inventor of the bread box. When that otherwise useful appliance arrived it became a benchmark. Things were bigger/smaller than a breadbox. From there we evolved into evaluating from the standpoint of something else, as in faster than speeding bullets, busier than hogs on ice, etc. Getting nearer to our subject, motorcycle testing has veered toward overdoing this. When a particular machine arrives it saves time and creative energy if the headline writers can say BIGGEST! FASTEST! while the fine print talks about more comfort than model X, lower seat than model Y, less buzz at the grips than model Z. Not a bad thing; the reader probably hasn't ridden, say, the YZ490, but if he's been on an Ossa Pioneer or Suzuki TM 125. it will mean something to be told the YZ490 is faster than both of them put together. Except that in the present case we have here the Kawasaki GPzllOO. Heavy Metal. Kawasaki's own distinct brand of technology, a linear and spiritual descendant of the raucous ol' Z-l. It isn't the most expensive motorcycle on the market, nor the most complicated, or most distinctive, most comfy, most demanding, etc. Kawasaki thinks the GPzl 1 is the quickest and fastest production-bike on the market but at this writing there are slightly quicker rivals and anyway, to swoon over fractions of a second in the quarter mile, or to quibble over esthetic appeal of round vs angular vs wedge fuel tanks is to miss the important part. The GPzl 100 is all Kawasaki and it works. This is the result of three converging lines. First, the Z-l that picked up Kawasaki's performance image as created by the two-stroke Triples, raised Honda by 150cc and set the big K in stone as the hot rod. Second, Kawasaki's engineering theme of simplifying and adding lightness, as seen with the KZ650, the KZ550 and KZ750. Third, sports bikes, while others were expanding on the softcore chopper theme. The Z-l of course grew into the KZ1000 and went (with success) super-bike racing but the other factories matched and beat Kawasaki in the various published tests. They had more power and speed. So early last year Kawasaki introduced the GPzl 100, derived from the KZ1000. Major modifications were involved. The 1100 is the basic crossframe Four, two cams, two valves per cylinder. Compared with the KZ1000, the 1100 got a larger bore, a lighter crankshaft, revised valve timing, more valve lift, higher compression ratio and bigger valves, all of which is standard hot rod stuff. The GPz also got electronic fuel injection, which is big buck high tech not-quite hot rod stuff. One can't call these ideas gimmicks but the various factories do seize various engineering themes, like maybe tur-bocharging or water-cooling or single shock rear suspension or anti-dive forks and emphasize them. Sometimes several factories start down the same path at nearly the same time. Kawasaki's pet, so to speak, has been fuel injection. The first production version appeared in 1980, on the KZ1000G Classic. It worked, despite our skepticism. Kawasaki's system was based on the L-Jetronic system developed by Bosch, in Germany, and earlier seen on Datsun cars, in fact Kawasaki engineers checked Datsun's service experience when they were wondering about all those sensors, the mysterious black box, the miles of wiring and so forth. The 1981 version, as seen on the first GPzl 1, worked even better. Instant cold starts, smooth all the way to valve float, crisp throttle response, no lag or stumble, everything the engineers promised. Engine output being assured, the 1981 GPzl 1 got frame modifications based on superbike experience. More steering rake, two inches added to the wheelbase, low bars, rearset pegs, an oil cooler, air-assisted forks, adjustable damping on the shocks, bright red paint with silver and dark blue trim, black paint for the engine and matte black for the exhaust system. Everything in the sports department catalog, in sum. The bike was wonderful. It was designed and styled and suspended for performance and we said every good thing in our book. But that's now history. Kawasaki introduced the GPz550 and then the GPz750. Both were done in the same lines as biggest brother, in that they got more power from tuning rather than extensive redesign, they have red paint and black engines, an angular style that flows tank into seat into rear section withshades of Z-l againjust a hint of the traditional ducktail. The major news for the 1982 GPzl 100 is that the fuel injection has been modified. A lot. Probably no layman can really understand all the details of any electronic system but as nearly as we can decipher the book, a carburetor works because air flow across a restriction lowers air pressure and the pressure drop pulls fuel into the air stream. Fuel injection has no such restriction. Instead, there is a fuel pump and that pump pushesinjection, get it?fuel into the air stream,. In this case the injector nozzles are just upstream from the intake valves.

Now. In a sense, fuel injection is a way to get more performance indirectly. Because there is no restriction in the intake tract, as in carbs, the engine should be able to flow more air and thus develop more power. That isn't the purpose here. Instead, a carb is set at the factory to deliver so much fuel for so much air under such-and-such a throttle opening. It averages out, you might say, and because there are so many variables, like air temperature, throttle demand, engine speed, air density and so forth, the mixture is seldom quite perfect. Further, if you want lots of safe power you calibrate a touch rich and if you're required to certify a certain level of exhaust emissions, you calibrate lean. In the case of motorcycle engines the engineers have recently had some, er, lean years but now have pretty much gotten control. Fuel injection's promise is that the engine will run better. The engine's demands can be more precisely calculated and the fuel delivery more precisely controlled. So the mixtures at hot, cold, idle and wide open can be right on the mark. That EFI can meet the emissions requirement and deliver optimum mixture for safe power, at the same time is why the performance comes as an incidental. Kawasaki's first unit was impressive. The second was simpler and better. It's almost embarassing to read the '82 specifications and learn how much room there was for improvement. Still skipping lightly over the long words, the '82 system is named DFI, for Digital Fuel Injection. The name change is because the '81 used an analog signal processor and the '82's is digital, with smaller and fewer parts. Next, the L-Jetronic had an air flow meter well upstream from the injectors. This restricted flow while measuring it. DFI has a throttle valve sensor, a remote way to measure flow while being less restrictive. Key to EFI is the sensors, devices that measure various conditions and report to the microcomputor, which in turn tells the injector nozzles how much fuel to pump into the air stream. The L-Jetronic has sensors for airflow, engine speed, battery voltage (actually a means of correcting for voltage change. The signals are electric.) and temperatures of the engine and the incoming air. The DFI has sensors for throttle opening, engine speed, battery voltage, engine and intake temperature and ambient air pressure. DFI, the Kawasaki technical men say, takes more pulses while being lighter, simpler and thus less liable to failure and has less intake resistance.