Power was moderated via the Wet, multiple discs, hydraulic operated.

It came with a 120/70 ZR17 front tire and a 190/50 ZR17 rear tire. Stopping was achieved via 2x 310mm discs 4 piston calipers in the front and a Single 250mm disc 2 piston caliper in the rear. The front suspension was a 43mm inverted cartridge fork with adjustable preload, 18-way compression and 15-way rebound damping adjustment, while the rear was equipped with a Bottom-Link Uni-Trak® and gas-charged shock with adjustable preload, stepless rebound and compression damping adjustments, adjustable ride height,. The ZX-14 Ninja Special Edition was fitted with a 22 Liters / 5.8 gal fuel tank. The wheelbase was 1461 mm / 57.5 in. long. 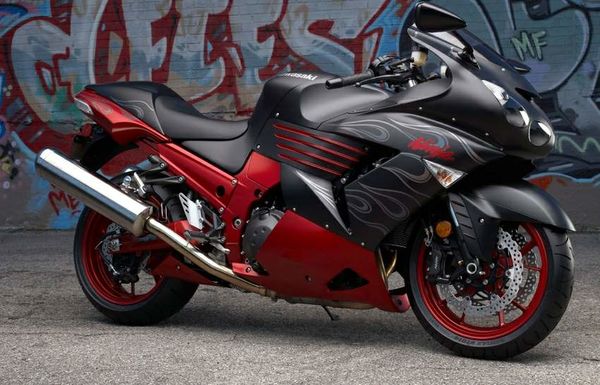 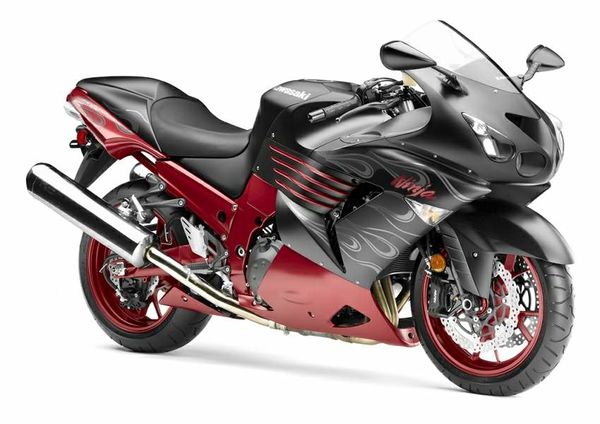 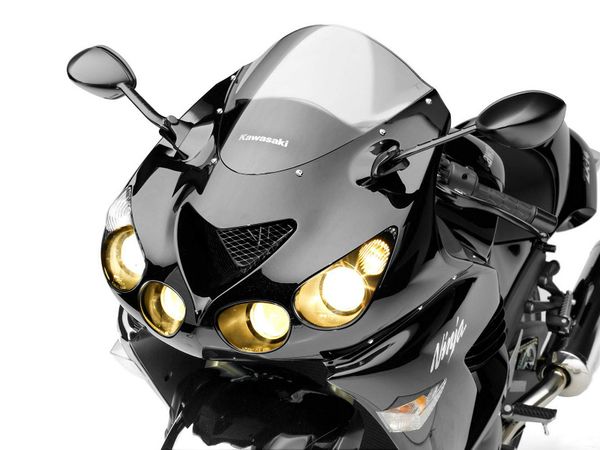 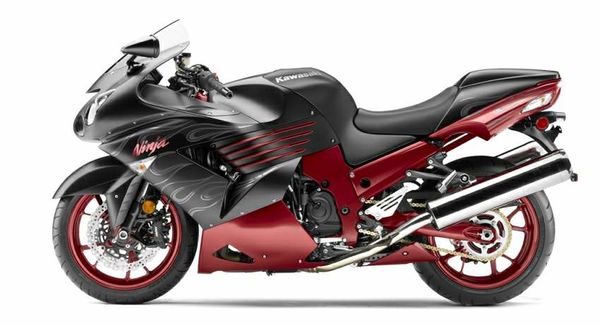 The US only ZZR1400 gets a red-and-black theme but with flame-effect graphics and a red anodized finish on the entire frame, subframe and swingarm as well as the wheels.

KAWASAKIS FORMIDABLE FLAGSHIP, THE 2008 NINJA® ZX-14 FINE-TUNED FOR EXTRA FIREPOWER Every champion knows sustained dominance is only possible with constant improvement. Such is the case with Kawasakis Ninja® ZX-14. Since its debut in March of 2006, this motorcycle has ruled the open class sportbike roost with nearly non-stop magazine comparison victories. Even though the 1352cc Ninja ZX-14 won lavish praise for its massive torque, effortless power, agile handling and comfortable ergonomics, Kawasaki engineers were not willing to leave the door open to potential challengers.

The 2008 ZX-14 retains all the great features that made it a legend, plus more bottom, mid and top-end power. Changes to the engine and exhaust system allow it to comply with strict Euro-III emissions and tightening noise regulations. To meet noise standards, the engineers focused on reducing internal mechanical noise instead of muzzling the exhaust system. The result wasnt a power loss, but an overall improvement of the engine character and an actual increase in the ZX-14s legendary peak power! Yes, you read that correctly. Emissions and noise levels are lower, peak power is higher, the mid-range hit is stronger and smoother and low-end torque has been increased. A win-win solution for all, in our books. To achieve those stringent emission levels, a third honeycomb catalyzer was added in the collector, joining the two honeycomb catalyzers already in each silencer. The secondary air ports in the cylinder head and its cover were made approximately 20 percent larger to permit an easier air flow into the exhaust system. A new Air Switching Valve (ASV) caps off the low emission updates and can handle approximately five percent more flow than the last years version. Conquering the challenging Euro-III regulations is admirable, but Kawasaki took it to the next level on the ZX-14 with changes to its 1352cc engine which improve the power characteristics while meeting noise regulations. The injection system was first to receive attention in an effort to boost peak power, give a more linear mid-range and stronger low end torque with the same user-friendly personality. The fine-atomizing fuel injectors had their lateral spray angle increased from 15 to 20 degrees to disperse the atomized fuel over a wider area and the intake porting was revised to provide optimum flow characteristics. Outside of the engine, the exhaust silencers feature refinements to the capacity of the first and third chambers and the lengths of the pipes projecting from the baffle plates have been adjusted. Next the entrances to the connecting tubes (joining header pipes 1-4 and 2-3) were enlarged approximately 75 percent to compensate for the new collector shape, which was altered to allow the inclusion of a third honeycomb catalyzer. These changes were a major component of the enhanced the torque characteristics, especially in the low rpm range. Reducing internal mechanical noise allowed for the engineers to employ comparatively little exhaust modification to meet noise mandates and consequently the exhaust system could remain free flowing for greater power. Lower mechanical noise was attained by revising the piston profiles and adding a urethane insulation sheet to the inside of the magnesium chain cover. The engine and exhaust system werent the only areas updated for 2008. The ZX-14s chassis design is every bit the equal of its power plant. Using an advanced version of Kawasakis unique aluminum monocoque design, its frame is lightweight and very strong. Switching to die instead of gravity casting for the cast aluminum sections of the main frame resulted in lighter parts, allowing the Kawasaki engineers to shave weight on the already slim and compact frame. Featuring a relaxed sport riding position, the ZX-14 is compact without being cramped, with its bars positioned within easy reach. The narrow engine, monocoque frame, and fuel tank provide a slim rider interface. Footpegs are low-set to give ample legroom and the low seat height and narrow seat front make it easy to plant both feet on the ground when stopped. Comfort levels are high enough that riders might think theyre on a dedicated sport tourer, but one twist of the ZX-14s throttle is all it takes to remind anyone this is the worlds quickest and most powerful production motorcycle. Uninterrupted fairing lines give the ZX-14 a smooth, flowing appearance from front to rear due in part to the monocoque frame that goes over the engine and doesnt protrude through the cowling. Quadruple projector beam headlights adorn the ZX-14s front, with low beams in the two center lenses and the outer lenses containing the high beams and position lamps. The turn signals are cleanly integrated into the fairing and rear cowl with a unique V design LED tail lamp capping off the sleek aerodynamics of the ZX-14 that reinforces Kawasakis aircraft heritage. This blending of form, power, and handling characteristics yields a motorcycle with appeal that extends far outside of its high performance audience. The Ninja ZX-14 lives up to its Ninja heritage, by surpassing the competition.

- Houses the air box and air filter in a space-saving design that actually simplifies air cleaner maintenance. Two screws hold a plate on the left side of the frame that allows air cleaner access - Battery is also housed within the frame and has simple access through the back side of the frame Inverted 43mm Cartridge Type Front Fork - Damping rates offer stiff initial action to resist front-end dive when braking - Stepless damping adjustment improves suspension performance Bottom-Link Uni-Trak® Rear Suspension - Linkage rates provide linear suspension action - Bottom-link design concentrates the weight lower in the chassis for a lower center of gravity, which makes the motorcycle more nimble Radial Mounted Petal Front Disc Brakes - Radial mounted four-piston front brake calipers utilize integrated mounting points at both the top and bottom of the caliper, with the mounting bolts inserted through the rear of the caliper instead of the side/front. This makes the caliper more rigid, which improves brake feel over a wider range of operation - A separate brake pad is used for each piston. Individual pads provide increased cooling efficiency and can absorb more heat without deforming so they maintain consistent brake feel stop after stop - Petal design brake discs provide better cooling and warp resistance - Radial-pump front brake master cylinder improves brake performance and lever feel - Wheel rims feature center ribs which are slightly offset so tire balance weights can be located precisely along the wheels centerline.

Wind Tunnel-Designed Bodywork - Monocoque frame goes over the engine the fairing is uninterrupted by protruding frame spars, adding to the extremely long and low styling. - Both the front and rear turn signals are integrated into the bodywork and have clear lenses to enhance the appearance - Quadruple projector beam headlights give the ZX-14 a distinctive upper fairing. The outer lights contain position lamps and the high beams, while the low beams are in the center lamps - Lightweight Denso radiator with high-density cores provides maximum cooling efficiency Full Instrumentation - Dual analog speedometer and tachometer with white faces are easy to read - Multi-function LCD digital display includes an odometer, two trip meters, fuel gauge, gear position indicator and a clock - Programmable shift indicator lamp illuminates at pre-set rpm to signal rider upshift - Programmable clutch engagement lamp illuminates at pre-set rpm to signal the rider to engage the clutch - CAN (Controller Area Network) interface between the gauges uses fewer wires while allowing a greater volume of information, such as estimated fuel mileage, to be exchanged