It came with a 120/70 ZR17 front tire and a 180/55 ZR17 rear tire. Stopping was achieved via 2 x 300mm discs, 4 piston calipers in the front and a Single 220mm disc, 1 piston caliper in the rear. The front suspension was a 41 mm inverted Showa Big Piston Front fork with top-out springs, stepless compression and rebound damping, fully-adjustable spring preload, while the rear was equipped with a Bottom-Link Uni-Trak® with gas-charged shock, top-out spring and pillow ball upper mount, dual-range (high/low-speed) stepless compression damping, 25-way adjustable rebound damping, fully-adjustable spring preload. The ZX-6R Ninja Performance Edition was fitted with a 17 Liters / 4.5 US gal fuel tank. The wheelbase was 1400 mm / 5.1 in long. 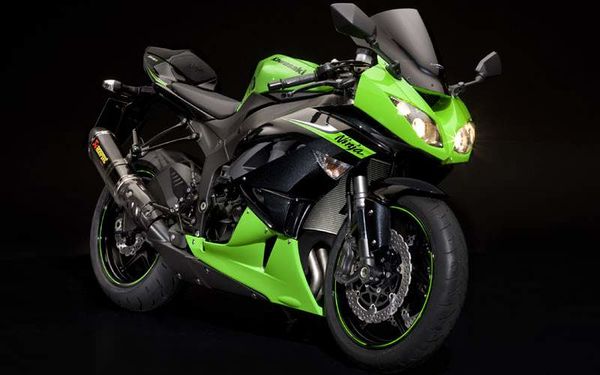 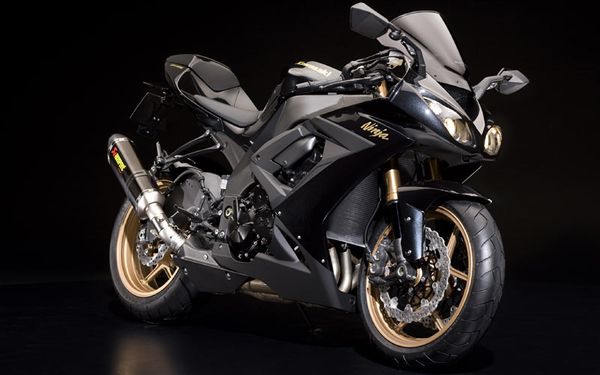 2009 Review Kawasaki ZX-6R Performance Edition gets an Akrapovic silencer, double bubble screen, rear seat cowl plus tank and knee pads THE KEY TO THE EVOLUTION OF THE KAWASAKI NINJA ZX6R FOR 2009-10

Well Kawasaki have done it again. The Kawasaki Ninja ZX6R for 2009 / 2010. A complete model change and the press love it. MCN rated it 10/10. Again, this bike is lighter, more power, more torque and vastly improved handling characteristics thanks to the big piston forks.

2010 Kawasaki Ninja ZX6R Engine & Performance A new engine for the Ninja ZX6R that weighs 2Kg less than the old one helping towards the total weight saving of 10KG yes, 10KG. In fact, throw a leg over it and it actually feels like Kawasaki have shed a lot more than 10 kilos.New double bore intake funnels (velocity stacks) on the Kawasaki ZX6R feature inlets at two different heights, allowing performance increases in both the mid- and high-rpm ranges. Optimised cam nitriding and tappets with increased durability enabled the use of high-load cam profiles which improve overall performance. The Kawasaki ZX6R has new pistons with new profiles and improved crown finishing to contribute to the gain in performance. Molybdenum coating on piston skirts reduces friction, piston rings with less tension reduce mechanical loss and revised cam chain guides stabilise chain motion, further contributing to reduced mechanical loss. Revised exhaust collector layout contributes to improved low and mid-range performance while maintaining high-rpm performance.

As seems to have become the norm with the late date Kawasaki Superbikes, a slipper clutch that really does the business comes as standard fitment on this new Kawasaki Ninja ZX6R.

The Kawasaki Ninja ZX6R Chassis While structure of the main frame is basically the same as that of the ZX6R from 2008, revised rigidity around the swingarm pivot and the rear engine mounts optimises front-rear rigidity balance. A 2-piece sub-frame is an aluminum die-casting consisting of a front and rear section. This layout for the 2009 Kawasaki Ninja enables a very precise and very lightweight construction. The new sub-frame is also very narrow, allowing the rear of the Ninja ZX6R to be very compact and slim. Steering head angle (rake) has been adjusted in order to allow the ZX6R to turn in more easily. An ohlins steering damper has been fitted as standard ensuring that the more agressive attitude of the Kawasaki ZX6R does not get out of hand.

Suspension and Big Piston Forks (BPF) on the new Kawasaki ZX6R Here's what Kawasaki have to say:

"The new BPF is one of the great contributing factors to the new Ninja ZX6R s great composure under braking. Compared to a cartridge-type fork of the same size, the BPF features a main piston almost twice the size (φ37 mm vs φ20 mm on ZX6R of 2008); oil inside the BPF acts on a surface area almost four times the size. The larger surface area allows the damping pressure to be reduced while ensuring the damping force remains the same. Reducing the damping pressure allows the slide pipe to move more smoothly, which is especially noticeable at the initial part of the stroke. The result is greater control as the fork begins to compress and very calm attitude change as Kawasaki ZX6R weight shifts forward when reducing speed, and thus greater chassis stability on corner entry. Because the BPF eliminates many of the internal components used in a cartridge-type fork, construction is simplified resulting in lighter overall fork weight. Compression and rebound damping adjustment are located at the top of each fork tube. Preload adjustment is at the bottom of the ZX6R fork."

The 2009 Ninja ZX6R Brakes The radially mounted front calipers of the Kawasaki ZX6R that grip the two 300mm front wavey discs are driven by a very powerful radial master cylinder that allows the brakes to put the new forks to task.

The Kawasaki ZX6R Instruments In the heat of battle, even racers occasionally lose track of what gear theyre in. The convenient gear position sensor gives instant information to the rider. The clocks are very clear and clean to read with the swiftest of glances.

The new Kawasaki Ninja ZX6R offers the power of a high-performance 600 mated with the nimble handling characteristics of a small-displacement racer. A combination that raises middleweight supersport performance to a new level.