It came with a 120/70 ZR17 front tire and a 190/50 ZR17 rear tire. Stopping was achieved via 2x 320mm discs 6 pistons calipers in the front and a Single 230mm disc 2 piston caliper in the rear. The front suspension was a 43mm inverted cartridge fork, adjustable preload, fully adjustable compression and rebound damping while the rear was equipped with a Piggy-back reservoir rear shock offers adjustable compression and rebound damping, preload and ride height to match a wide range of operating conditions.. The ZX-7R was fitted with a 18 Liters / 4.7 US gal fuel tank. The bike weighed just 203.4 kg / 456.3 lbs. 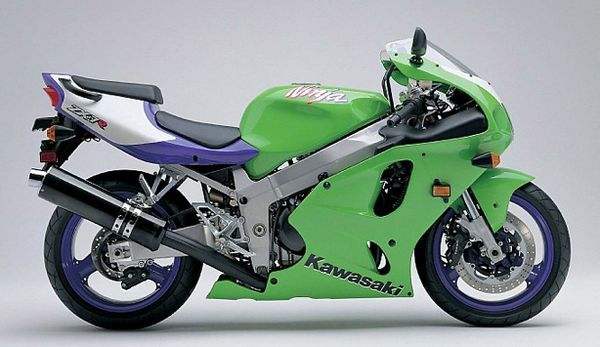 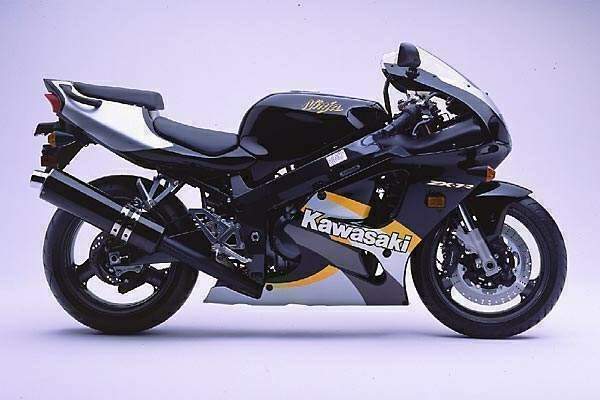 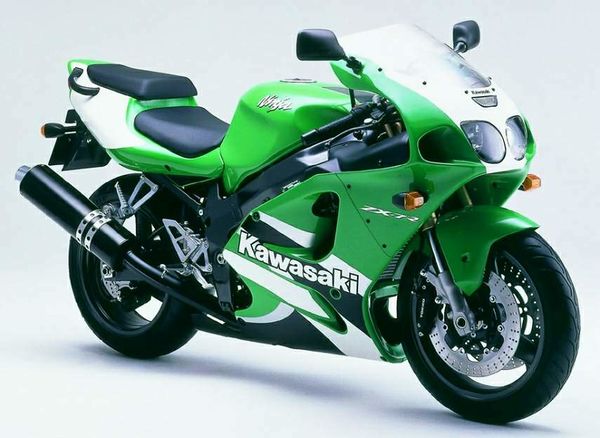 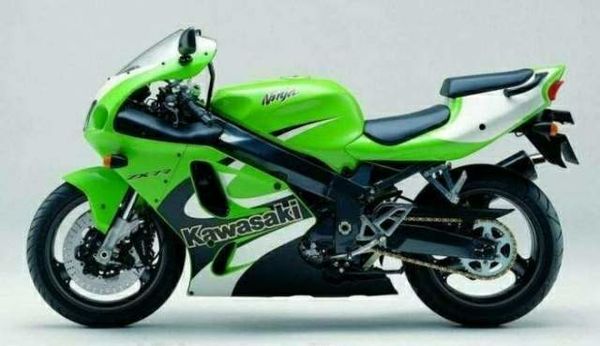 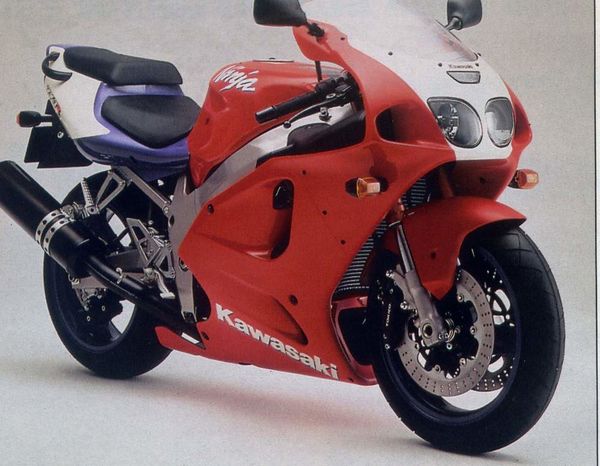 .Kawasaki's ZX-7R is a perfect example of motorcycle engineering refinement. In 1993 Kawasaki designed the new generation ZX-7R that has, to this day, remained virtually unchanged. For 1997 Kawasaki continued to refine rather than redesign. It's hard to argue against this approach as it is obviously working on the racetrack. Doug Chandler's performance on the Muzzy Superbike is proof enough that this machine is extremely competent.

The lack of obvious design changes or a new appearance may make it hard for dealership salesmen to make their pitch, but knowledgeable consumers will recognize the ZX-7R as an impeccable package needing no sales hype. The ZX-7R benefits from having any annoying initial design flaws solved over its four years of steady refinement. This makes for a pleasant ride with little to complain about. Some of the issues Kawasaki addressed over the years were unusable mirrors and providing an ergonomically correct cockpit.

The combination of larger than average trail numbers and peculiarly narrow triple clamps require a heavy push on its handlebars to turn the bike quickly, while the triangulated profile of the Dunlop tires complements the bike's geometry perfectly, allowing it to reach maximum lean angle quickly and effortlessly. Although initial input is heavy, once leaned over the handling is neutral and the profile effect of the tires is very noticeable. Compared to early models, the new ZX-7 has better throttle response and midrange acceleration. The main reason for these improvements is the reduction of the intake ports by 4mm. "Smaller ports allow for better intake velocity and fuel atomization." The increased velocity pulls a better signal at the carburetor's needle jet, allowing for excellent carbonation. Other improvements over the original formula include Muzzy's touches in the form of strengthened crankshaft, two springs per valve and a special baffle in the joint pipe to maximize exhaust pulse effect for more torque. Low and mid torque was improved with a balance pipe connected between the number one and number four header pipes. The head itself was refined with straighter ports, aiming the 38mm carbs at 50 degrees into the combustion chamber. Kawasaki has now fitted the ZX's transmission with involuted splines on the input and output shafts, allowing for less backlash. Suspension components are also fully adjustable in the front and rear and control the chassis' attitude well. Adjustments include compression, rebound and ride height.

An experienced rider may now raise the rear to reduce front rake for quicker steering, and its firm ride still will soak up the big bumps. Those interested in commuting may choose to loosen the suspension settings for more comfort around town. I would recommend adjusting the factory settings by reducing front rebound two clicks, and dialing-in one less click of rebound and 3mm less preload on the rear. Brakes were improved for '97 by changing from four-piston calipers to six-piston, with the result being increased feel and power. New brake pad material also contributes to Grade-A stopping performance. The initial bite isn't there, but a strong hand increases stopping power with its rising rate. Improved from the original 1993-spec machine is the appearance and sound of its exhaust system. The sleek looking pipe has a deep, powerful tone -- louder than most stock pipes. Minimal restriction allows the engine to breathe yet it still remains quieter than an aftermarket muffler. "Among the most noticeable changes in the new ZX-7R is the addition of another ram air duct in the front fairing. Kawasaki's ram induction system is one of best designed. A noticeable increase in acceleration is felt during top speed runs."

From a distance the 1997 ZX-7R doesn't look different, but its refinements will be noticed in real world riding. It feels small -- like a heavy 600cc bike, but with noticeably more low-end grunt and a little more top end. The power delivery is one of the most linear I've ever sampled, and its spot-on carburetion, instant throttle response and impeccable chassis manners make the ZX-7R a very logical buy.