The Kawasaki Ninja launched and then revolutionized the Super Sportbike category. Now the 2006 ZX-10R super finesses that. The last major incarnation in 2004 hit new stride in "urbanizing" the racetrack breed, integrating street comfort and roadriding ergonomics. This latest champ returns to its racy roots all the more, though. It's an engineer's sophistication rather than a commuter's concession. You'll find these serious performance touches throughout. Such as the (finally) 18-position Ohlins steering damper to handle shake on a steering head moved forward 15mm along with 4mm added to the new aluminum swingarm to shift the weight bias rearward. Kawasaki hails this as delivering better traction. It all still rides on a wheelbase under 55". The frame is now altered to diecast with added rigid engine mounts to stiffen the bike overall. A crankshaft raised 20mm improves side-to-side transitions with a higher balance point. Then there's the smoother shifting in the 6 speed transmission sporting a revised slipper clutch. Intake valves have been reduced by 1mm to work with improved pistons, cylinder heads and injectors. These mechanical improvements are complemented with attention to the aerodynamics which affect styling, as well. Added width to the front fairing now houses a larger ram air-duct inhaling into a new airbox. This changed formfactor alters the look with smaller dual projector headlights, too. Unshrouded, heat-dissipating catalytic converters in stainless steel tubing are routed beneath the engine leading to all titanium exhausts tucked into dual undertail mufflers. Yet, there's still some room for stowage under your seat. The widened tail section is reported to add stabilizing aerodynamics in concert with the forward design, both now smartly integrating the turn signals. All this power and handling is controlled by four-piston, radial-mount, 300mm petal disc brakes in the front and a single 220mm petal disc in the rear. It's all delivered to Dunlop Qualifier rubber on the asphalt and a taller rear 55-section, 190mm rear tire for larger contact patch in leans. You're sitting atop suspension of 43mm inverted cartridge fork, adjustable preload, compression and rebound damping to feel and absorb the fast, nimble action. Performance prowess is shown and monitored by the onboard instrumentation gauge cluster: analog tachometer; digital speedometer; built-in lap timer; and an adjustable shift light. You've got your choice of three striking color schemes: Lime Green, Pearl Solar Yellow or Ebony Black. Racy, indeed.

The bike has a Chain transmission. Power was moderated via the Wet, Multi-disc manual.

It came with a 120/70 ZR17 front tire and a 190/55 ZR17 rear tire. Stopping was achieved via Dual semi-floating 310 mm petal discs with dual four-piston radial-mount calipers in the front and a Single 220mm petal disc with single-piston aluminum caliper in the rear. The front suspension was a 43 mm inverted fork with DLC coating,rebound and compression damping, spring preload adjustability and top-out springs, 120 mm travel while the rear was equipped with a Uni-Trak® with top-out spring, stepless, dual-range (high/low-speed) compression damping, stepless rebound damping, fully adjustable spring preload / 4.9 in.. The wheelbase was 55.71 inches (1415 mm) long. 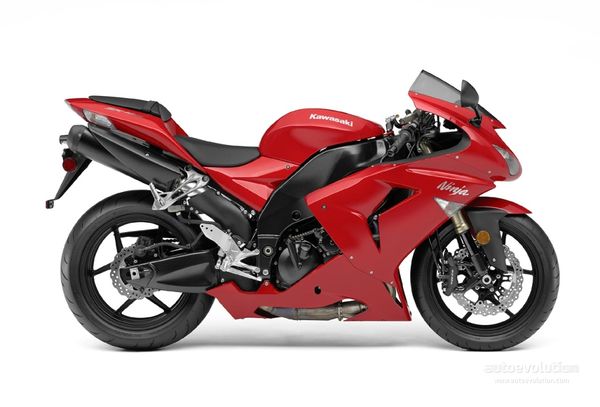 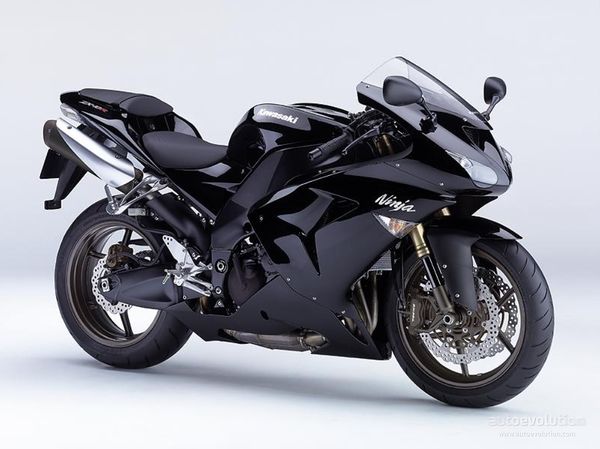 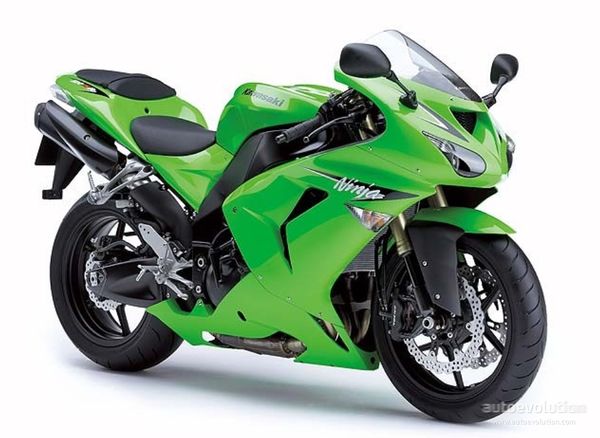 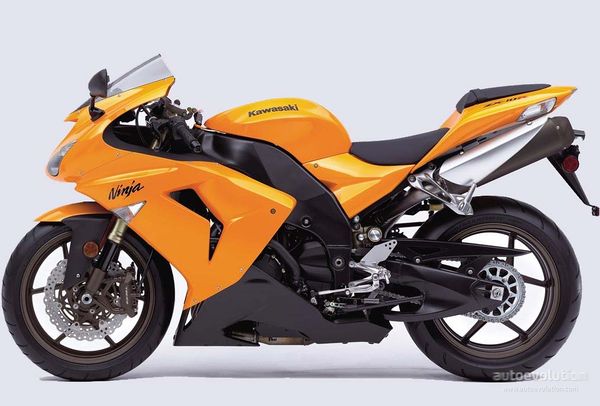 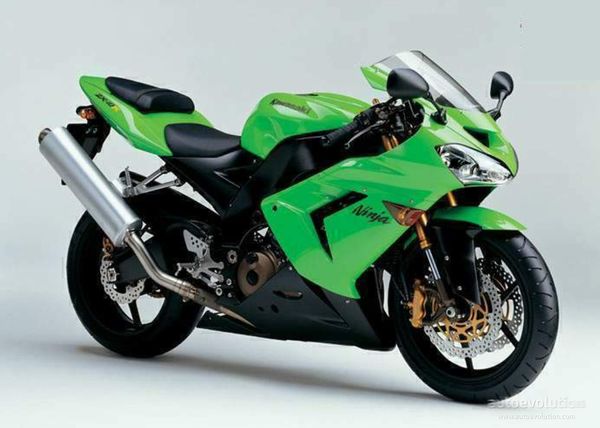 Two decades after the first Kawasaki superbike has been officially launched, the Japanese company released the new ZX-10R. 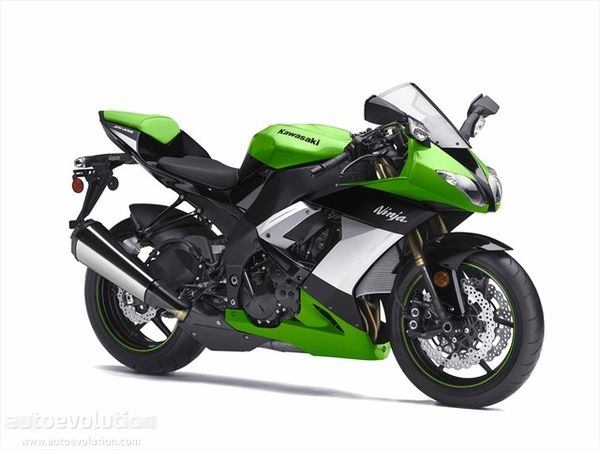 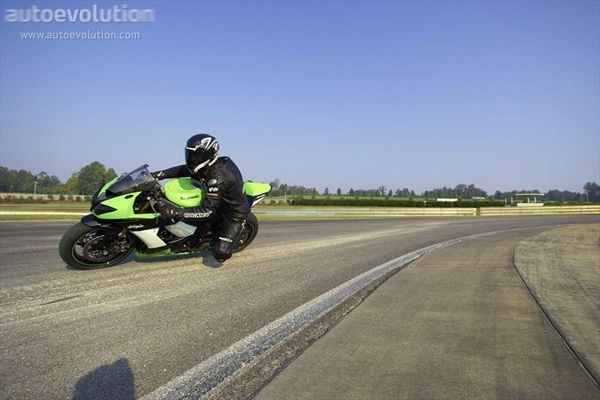 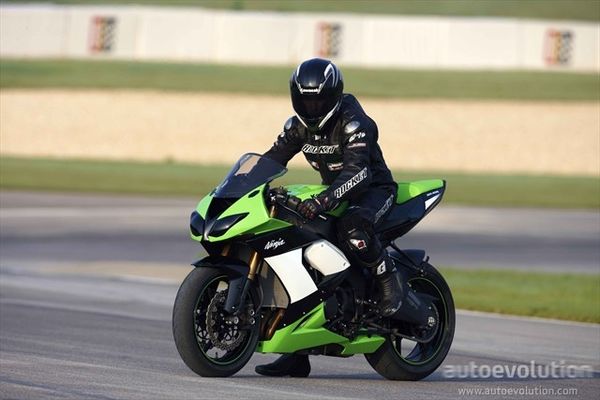 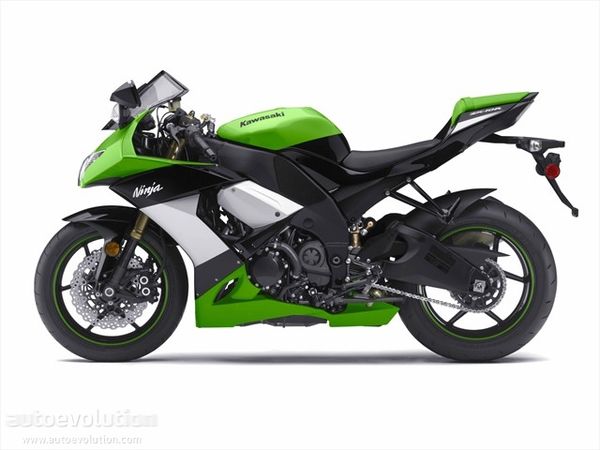 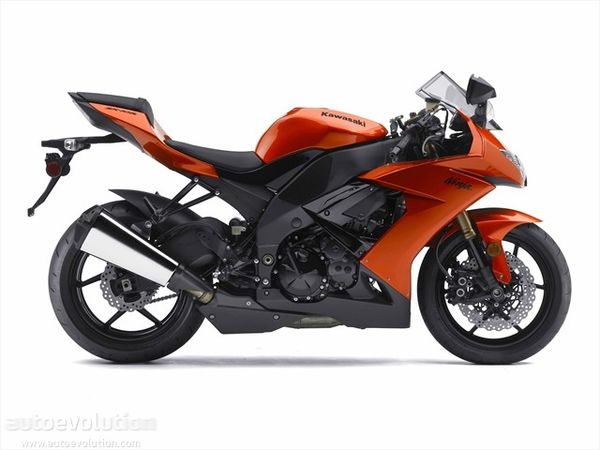 The ZX-10R Ninja is Kawasaki's "sequel" to the ZX-9R. The bike was officially launched in 2004 and slightly revised in 2005. The ZX-10R Ninja has a very narrow chassis that holds a light but powerful 998 cc engine. This lightweight super-sport is Kawasaki's response to Honda's CBR-1000RR Fireblade, to Suzuki's GSX-R 1000 and to Yamaha's YZF-R1. In 2004 and 2005, the Kawasaki ZX-10R won Best Superbike from Cycle World magazine and the prestigious international Masterbike competition. It is known to be the most 'hard edged' or race oriented out of the Japanese one-liter inline four cylinder motorcycles, with relatively quick steering and a ferocious powerband.