It came with a 110/90 V18 front tire and a 130/90 V17 rear tire. Stopping was achieved via 2x 236mm discs 1 piston calipers in the front and a Single 236mm disc1 caliper in the rear. The front suspension was a 37mm Kayaba hydraulically activated air drive abutments for air pressure while the rear was equipped with a Single air assisted shock adjustable for reload damping. The ZX1100 A-1 was fitted with a 20 Liters / 5.2 US gal fuel tank. The bike weighed just 244 kg / 538 lbs. 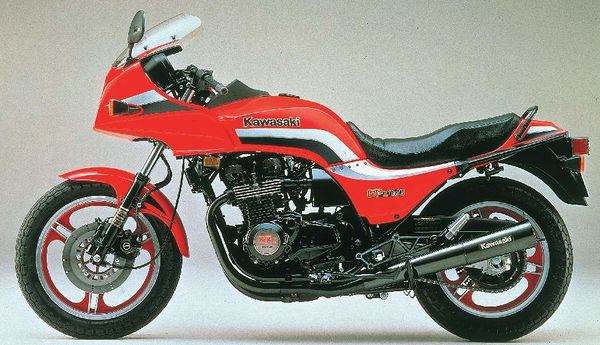 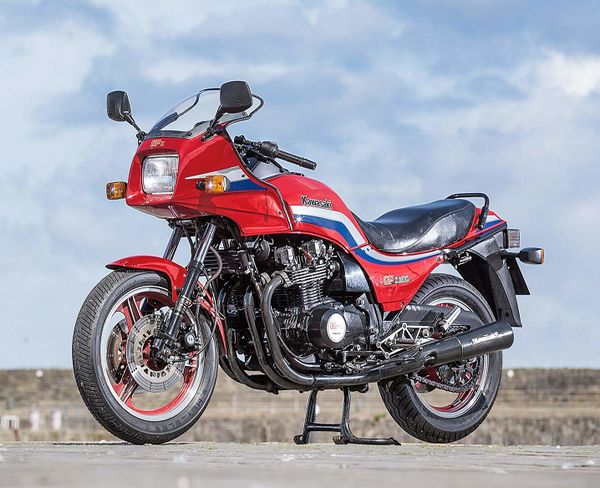 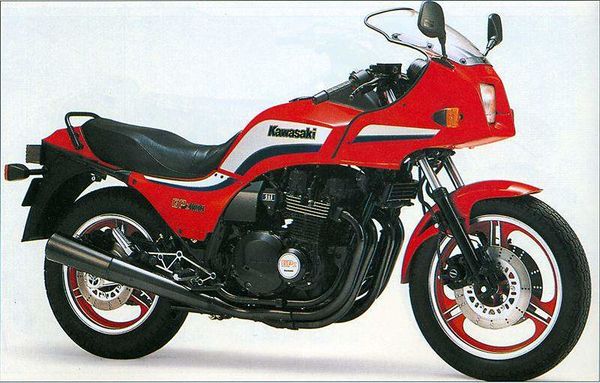 The banked circuit at MIRA is an eerie place if you've never ridden there before. Three half-mile straights connected by sweeping left-hand bends where the track suddenly tips up at an angle, gentle on the inside but steepening to become almost vertical at its outer edge.

On to more serious matters and, as you've possibly been thinking for the past few paragraphs, it's all very well knowing that you can accelerate from a standstill into the back of a panic-braking artic quicker than anyone else around but it's how the machine corners, stops and covers big distances that determine whether or not it's worth pawning the TV and starving the dog to buy one. In this case you can go right ahead because the kWacker scores high marks in each department. The GPz's frame is new  its top tube is of bigger diameter and thinner wall than before and a couple of cross-braces have disappeared  and interesting things dangle from its rear. The swing arm is a big wide aluminum box section, four pounds lighter than the '82 version despite a ball race added on outboard of the standard right-hand needle bearings to give extra rigidity. Drive chain tension is set by eccentric cams which being rigidly connected to the spindle ensure equal adjustment. Rear suspension is by Uni-Trak; not the hardware seen before on the CPz550 but a variation on Kawasaki's single-shock design which uses a lever system located beneath the unit to bump up spring and damping rates as shock travel is used. This makes for a lighter, lower unit than the original Uni-Trak design (which uses a bell-crank above the shock) and gives room for a big airbox and a low seat, though the linkage is ideally placed to catch road crud. A more serious failing becomes obvious when you go to adjust the shock. It's air-assisted and has a choice of four damping positions but the right-hand side panel must be unscrewed before any changes can be made, a time-consuming process which is made all the more annoying when you find the Schraeder valve too short for your air line to seat properly. Greater accessibility might lead to tampering from small boys but would save much hassle. Fortunately owners won't need to fiddle with the suspension very often. Once you've settled on an optimum setting it's hardly necessary to change it and although the rising rate effect is limited it's unlikely you'll need to pump the shock up before carrying a passenger (J Ryder and a certain Liberal politician notwithstanding). Around 20psi with shock damping on position three gave a good ride in conjunction with 8psi in the linked front forks; for serious street racery another 10psi in the shock and max damping helped stiffen things up. Set up like that the handling was very good. The bike is no lightweight  with its weight (537lb dry), high centre of gravity and long wheelbase the Kawa takes a fair bit of effort to hustle around but it stays stable at pretty well all speeds and angles. There's a distinctly top heavy feeling in ultra-slow bends and a couple of times the back end pogoed for a few yards after hitting a big bump mid-corner   more shock damping might have helped  but it never got out of line or threatened to develop into anything nasty, at least while there was meat on the rear tire. Front suspension is adjustable for preload via an air valve on the lower yoke and is aided for the first time by anti-dive; the hydraulic units on each fork leg give a choice of three positions. Even the softest of these made a noticeable difference if fork air pressures were kept low while adding air to the forks gave marginally more stability under braking but was not really necessary if the anti-dive was turned up instead. If maximum anti-dive was used, six psi or less was sufficient to keep the front end under control in anything but the heaviest of braking manoeuvres.

Such heavy-handed hooliganism is possible and great fun because the CPz is equipped with stoppers that are about as good as they come. Crabbing a fistful of front disc at speed brings the kWacker howling to a standstill in near-record time: there's heaps of power, plenty of feel in the lever and the pads are unaffected by water. Repeated lunatic braking under racing conditions can apparently get the lever coming back to the bar but there's no way this is a problem in road use. My only criticism is that the rear disc is perhaps a bit sharp; on one occasion I locked the back wheel momentarily when a car looked like pulling out and after that I was careful to use only the lightest pressure on the pedal except when two-up. With a healthy excess of power available for acceleration and deceleration it's not hard to get either tire to the limits of traction. That doesn't mean the rubber's not good: the 18in front and 17in rear tubeless Bridgestones (wheels are both an inch smaller than last year's) are suitably fat and sticky. Both tires are reassuring in the wet and well up to using all the GPz's generous ground clearance in the dry   folding footrests touch down first both sides, with an exhaust heat shield joining in on the right and very silly cornering speeds needed to deck anything solid on the left. The problem with soft tires on big bikes is of course that they disappear at a ridiculous rate. Not long after we picked up the bike its rear Bridgestone became worn enough to induce a definite weave, so we returned to get the CPz shod with a pair of green-triangle Michelins, recommended by Kawasaki for aftermarket fitment. These too were good tires, though after not much more than a further 1000 miles (including speed testing) their tread depth was becoming decidedly marginal. The price of riding 100 horsepower is high indeed. If the CPz is undeniably expensive to run then at least it looks expensive too. The red paintwork is bright, thick and set off nicely by the black of the fork sliders, engine and pipes (the badges of which worked loose on their rivets). As well as looking the part and keeping the wind off the rider a tall passenger suffers on the higher pillion seat though  the fairing carries the fine headlamp and the mirrors, which could do with being an inch wider. The other styling feature is not clever at all: a three-tiered instrument layout which puts clocks at the top, warning lights below them on the bars and a second panel for emergency lights in a console on the petrol tank. A number of problems here. The speedo is fine but for some reason the tacho (which also acts as a voltmeter) is much smaller and hard to read at a glance. The top warning panel is okay  lights for indicators, neutral, high beam and something wrong but when that last light starts flashing you have to look right down at the tank to see what the problem is. As well as carrying an LCD fuel gauge the tank-top console warns of sidestand down, low oil or battery fluid levels and of malfunction in the fuel injection system; a flashing light usually just means you're getting low on gas but you've got to slow right down to check or risk becoming an unwelcome passenger in the car in front. The problem does however become less serious when a tank bag is fitted  then you can't see any lights at all. Other ergonomic flops are the indicators which don't cancel automatically and aren't even easy to stop with your thumb, and the cold-start lever which is mounted on the DFI unit instead of up on the bars. That fuel injection system is a three-way improvement on last year's version. Its various sensors  for throttle opening, temperatures, pressure and so on are now monitored; if one fails a flashing light on the tail-mounted computer box saves time by revealing which is to blame. There's also an over-ride system to get you home at reduced speed if something does go wrong (you'd have had to push the old model) and a revlimiter now saves the engine from possible destruction by cutting off the fuel supply at 11,000rpm. All very clever, though the DFI is probably partly to blame for the GPz's reluctance to warm up  it splutters for a while even on mild days  and perhaps has something to do with the motor's wooliness below 4000rpm. It says a lot for the GPz1100 that faults like these fade almost to insignificance when you consider the bike as a whole. My memories of the big Kawasaki are not of annoying warning lights and fiddly cold starts, oh no. They're of blasting down empty A-roads in the late-evening sunlight, sweeping through curves with the bike staying immaculately on line then winding back the throttle coming out at seven grand, watching the world being sucked backWards and waiting for that magical, pulse-quickening surge into hyperdrive when the tacho touches eight. Powerbiking at its purest  the thrill of the quickest kWacker. Yes, the price is high, but the GPz1100 takes you higher by far. Source Bike Magazine 1983