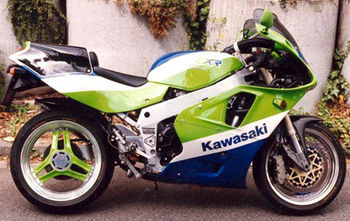 While the Honda RC30 gave more affluent riders of the late 80's a flavour of what a race bike felt like on the road (yet at real race bike prices), the Kawasaki ZXR750 H1 gave those on a more modest budget the same thing.

Based on the factory ZXR07 endurance racing prototypes ,the ZXR had an updated version of the GPX705's liquid-cooled four, in an alloy beam frame with up-to-date chassis parts.

The ZXR was a committed machine with a stretched-out racer-esque riding position, a peaky and typically Kawasaki harsh motor, and the infamous hard rear shock. The toothpaste green, white and blue or the more refined black, grey and red paintschemes set the racer looks off a treat too.

If you're in the market for a classic 750cc race replica but don't fancy stumping up the sky-high prices most RC30 s are fetching these days, then the gorgeous Kawasaki ZXR750H2 may be just the bike for you.

Launched in 1989, the ZXR was a true race-rep, with an aluminum beam frame, 36mm semi flat-side carbs and styling that still turns heads on years later.

The ZXR's engine was based around Kawasaki's GPX750 but with redesigned valve gear, a lighter crank and different pistons, which helped the inline four rev to over 12,000rpm and develop around 90bhp at the back wheel. Outright power was down against the ZXR's competition but it produced more midrange and torque than the GSX-R and VFR.

Like [Yamaha|Yamaha]], Kawasaki was slow off the 1988 WSB starting blocks. At the time its only competitive street-based bike eligible for WSB was the steel-framed GPX750. Even so, French racer Adrien Morillas managed to fashion a win on the GPX at the Hungaroring.

Behind the scenes, and as early as 1987, Kawasaki had already slotted a tuned-to-the-nuts GPX engine into a dual-beam alloy frame. This bike was the ZXR-7 and showed great promise when it took third place at Suzuka 8-Hour.

The road version of the ZXR-7 eventually showed up in late 1988 as the ZXR750H1, complete with aluminum frame, race replica bodywork and, of course, the fantastic Green Meanie paint scheme. But while Kawasaki dealers worldwide reaped the rewards of such a fantastic looking bike in sales and profits in 1992, the race ZXRs of Kawasaki France proved to be heavy and slow compared with the competition at the opening round of the 1989 WSB season.

ZXR success was limited on short tracks, with the most memorable being Aussie Rob Phillis showing his future WSB potential when he won the 1989 Australian 1000cc title on a ZXR. It was on the World Endurance stage where the ZXR and ZXR-7RR derivative proved its worth. Kawasaki won the championship four years in a row Carl Fogarty writing another race title on his CV when he helped clinch the 1992 championship. In the UK, family favourite John Reynolds won the British 750cc Supercup, scoring several fastest laps en route to the title.

In 1991, Kawasaki finally entered the homologation club with the ZXR750R K1, based on the road-going ZXR750J. Its specification, while impressive for a ZXR, was too little, too late considering Honda and Yamaha has similar spec machinery two years previous. But as a road bike it was affordable and desirable despite a dry weight of 190kg. The next version, in 1993, the ZXR750R M1, had an adjustable swingarm pivot point and ram-air induction.

Kawasaki's efforts were finally rewarded when Scott Russell achieved success at Daytona and won the now prestigious WSN championship in 1993.

Carl Fogarty said: It was a full-blown F1 thing and has to be the fastest bike I've ever ridden in my life. It was a big bike, but it was a missile. When I sat on it I disappeared. I had a real job hanging off the side of it because I wasn't big like my team-mate Terry Rymer.

The chassis worked well and I had no problem with it apart from it was a bit of a lump to throw around. On the straight at the Bol d'Or, I just sat back and laughed because I was passing everyone.

The engine was a liquid cooled in-line four, four-stroke. A 71.0mm bore x 47.3mm stroke result in a displacement of just 749.0 cubic centimeters. Fuel was supplied via a double overhead cams/twin cam (dohc).