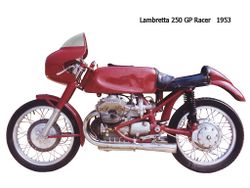 Specializing primarily in scooters, Lambretta was established after the Second World War. Lambretta created stylish, fully-enclosed machines such as the LD150 which were hugely popular during the 1950s. Italian production was halted in the 1970s but Lambrettas continued to be manufactuered under license in Spain and India.

The Lambretta was a line of motor scooters manufactured in Milan, Italy, by Innocenti. The name Lambretta comes from the name of a small river (Lambro) in Milan, near the factory.

In 1922, Ferdinando Innocenti of Pescia built a steel tubing factory in Rome. In 1931, he took the business to Milan where he built a larger factory producing seamless steel tubing and employing about 6,000. During the Second World War the factory was heavily bombed and destroyed. It is said that surveying the ruins, Innocenti saw the future of cheap, private transport and decided to produce a motor scooter – competing on cost and weather protection against the ubiquitous motorcycle. Innocenti company started production of Lambretta scooters in 1947 and ceased production in 1971. However, Lambrettas were manufactured under licence in Argentina, Brazil, Chile, India and Spain, sometimes under other names but always to a recognizable design (e.g. Siambretta in South America and Serveta in Spain).

As wealth increased in Western Europe in the late 60s, the demand for motorscooters fell as the small car became available to more people and Lambretta started to struggle financially. The British Motor Corporation (BMC) took advantage of Innocenti's financial difficulties as well as their production and engineering expertise and contracted Innocenti to produce cars under license from BMC. The Innocenti Mini used the mechanical components of the original but was in many ways superior to it.