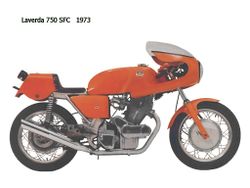 Moto Laverda Company was created in 1949 by Francesco Laverda. The roots of the Laverda Motorcycle company go back to 1873, when Pietro Laverda (1845-1930) decided to start an agricultural engines enterprise in the small rural village of Breganze. Almost exactly three quarters of a century later, with a spirit of enterprise and feeling the need to improve the situation of an economically underdeveloped region which had suffered badly from two world wars, in October 1949, Pietro's grandson Francesco founded, Moto Laverda S.A.S - Dottore Francesco Laverda e fratelli.

Laverda is an Italian manufacturer of Combine harvesters and one-time a manufacturer of high performance motorcycles. The motorcycles in their day gained a reputation for being robust and innovative. In October 1949, Francesco Laverda founded, Moto Laverda.

What started in 1947 as an evening pastime garage project of two technical enthusiasts became one of the most successful motorcycles in history. The first bike they produced was a simple four stroke 75cc bike with girder forks and a fully enclosed drive chain. 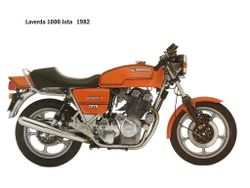 Laverda became well known for building small capacity machines of high quality, durability and relative innovation for the time. To prove this, right from the beginning they modified their bikes in order to race them in distance and endurance events like the Milan-Taranto, the Giro d'Italia and the Cavalcata delle Dolomiti. In 1951 upon their first entry in the Milan-Taranto, the 75cc Laverda's finished 4th, 5th, 6th and 10th in their class, racing against renowned marques like Ducati, Moto Guzzi, Alpino, Verga, Cimatti, Navarra, Arditto, Capriolo and Ceccato. Inspired by these results, and after once again improving their bikes, Laverda entered 20 bikes the following year in the 15th running of the Milan-Taranto in 1952. In this race which covered a distance of 1410km they took the first five places. The winner was Nino Castellani, L. Marchi came second and F. Diolio came third. In total they had 16 bikes amongst the first 20 of the classification. Laverda motorcycles thus became a firm favorite among racing clubmen due to their record for reliable performance. 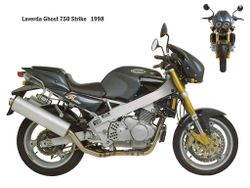 Over the next two decades, Laverda would go on to produce new models of ever increasing capacity and capability, in different sectors of the market. Off-road, trial and motocross machines were developed in conjunction with other manufacturers like Zündapp, BMW and Husqvarna, and were successfully raced. But the real development came in street models, which began to earn a good reputation as classy, low maintenance and quiet motorcycles. From that first 75cc single, they eventually went on to produce different bikes ranging from scooters, the Laverdino commuter and eventually to the 200cc twin. 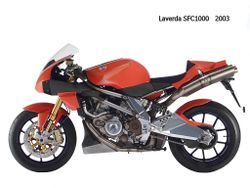 By the late 1960s, Francesco and brothers began sketching out a new breed of large motorcycles that would be built around an all new 650cc parallel twin engine. The brand was now sufficiently strong and well known, and Francesco's son Massimo had just returned from the USA where it was clear that sales were dominated by large capacity British and American hardware. Above all this, was a desire to produce a prestigious and powerful machine that could conceivably take on the best and finest from Moto Guzzi, BMW and the rapidly emerging Japanese.

In November 1966 Laverda debuted the result of this thinking with the 650 prototype at Earls Court in London. While not an extreme sport bike in any sense, it exhibited all the virtues that Laverda had become synonymous with, while at the same time it revolutionised the concept of a big bore bike so far being synonymous with British. After this first appearance however, Luciano Zen and Massimo Laverda retreated until April 1968 working hard in order to perfect the bike enough to enter four motorcycles in the prestigious Giro d'Italia, with three of the four entered bikes already having an increased capacity of 750cc. The 650cc Laverda gained victory in her class, the three 750 cc bikes ending amongst the first 10 of their class! Two weeks after this victory the first 650 cc production models left the factory! The bikes carried the finest components available at the time, from British Smiths instruments, Pankl con-rods, Ceriani suspension, Mondial pistons, to Bosch and (revolutionary at the time!) Japanese Nippon-Denso electrical parts, thus eliminating the one problem plaguing nearly all contemporary British and Italian motorcycles at the time: their electrical unreliability. The 650cc offered superior comfort and stability with its handling at least equivalent to the competition. Of course, it also carried a high price. A total of 52 Laverda 650cc's were produced.

The true birth of Laverda as a serious competition brand however happened with the introduction of 750cc which basically was issued at the same time as the 650. The first bikes however were produced for the American market under the brand "American Eagle", which were imported to the US from 1968 by Jack McCormack. The bikes were basically identical to the 650 except for the cylinder dimensions and an upgrade from 28mm to 30mm carburetors. In 1969 the "750 S" and the "750 GT" were born, both equipped with an engine which would truly start the Laverda fame. Raced by the factory right from the prototype stage, the machines proved their reliability by finishing every race they entered, eventually taking some victories. Just like the agricultural machinery made by the other family business, Laverdas were built to be basically indestructible. The parallel twin cylinder engine featured no less than five main bearings (four crankcase bearings and a needle-roller outrigger bearing in the primary chain case cover), a duplex cam chain, and a starter engine easily twice as powerful as needed. Of course, this made the engines and subsequently the entire bike heavy, heavier than, say, a Ducati 750 of the same vintage, but they were prodigiously fast and stable.

The SF evolved to include disc brakes, cast magnesium wheels, and other technical novelties. Developed in parallel with the road bikes was the SFC (super freni competizione), a half-faired racer that was developed to win endurance events like Le Mans, the Montjuic 24 hours and the Bol D'Or. This they did, often placing first, second and third in the same races, and dominating the international endurance race circuit. Distinguished by its characteristic orange paint which would become the company's race department color, its smooth aerodynamic fairing and upswept exhaust, the SFC was Laverda's flagship product and best advertisement, flaunting pedigree and the message of durability, quality, and exclusivity. The SFC "Series 15,000" was featured in the Guggenheim Museum in New York's 1999 exhibit "the Art of the Motorcycle" as one of the most iconic bikes of the 1970s.

In 1968 Laverda launched a new 750cc model range to be ahead of the Japanese competition. This model featured a new three cylinder power plant. In 1972 the all new 1000 3C model went into production. This model shared some of the more exotic features of the SF/SFC such as the engine as a stressed chassis member and distinctive styling. Even though the 1000cc represented little improvement over the outgoing twins, still it had considerably more power. Combined with its sheer size, weight and after gaining the title of the "World's Fastest Production Motorcycle" it quickly won a reputation as a "Hard Man's bike".

Roger Slater developed an even higher performance version in '82 named the Jota. A unique factor regarding the three cylinder engines up to 1982 is that they featured a 180 degree crankshaft arrangement, whereby at TDC, one piston would be up, and two down. This purposefully out-of-phase design gave the 1000cc Laverdas a unique and appealing sound, a special riding character and a brutish behaviour with the unfortunate side effect of heavy vibration and a fairly low redline.

The Laverda brand was absorbed by Piaggio, when in 2004, Piaggio absorbed Aprilia. Since, Piaggio has elected to quietly close all activities related to the Laverda brand, and has publicly stated that they would be willing to sell the rights to the brand if an investor should appear. Today, despite a parking website by Piaggio at Laverda.com, the brand is no longer in use.

Later, it produced the 750 LAVERDA which sold well across Europe and the U.S. The Laverda brand was absorbed by Piaggio, when in 2004, Piaggio absorbed Aprilia. 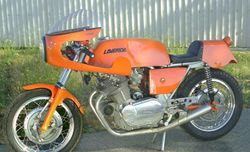 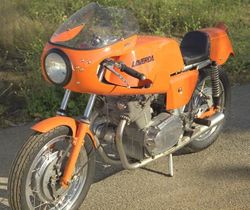 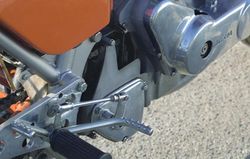 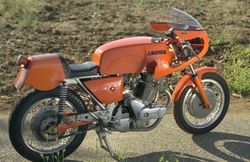