The engine was a air cooled twin, four-stroke. A 80.0mm bore x 74.0mm stroke result in a displacement of just 744.0 cubic centimeters. Fuel was supplied via a overhead cams (ohc). 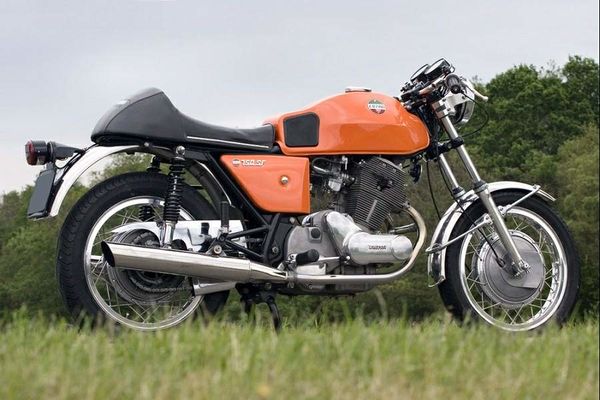 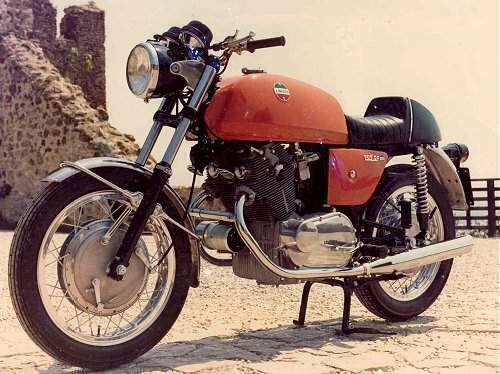 The 1971 MY Laverda 750 SF, is basically the same as its 750 S sibling, the only major difference lying in the braking system. Even the SF suffix comes from the Italian "Super Freno", which literally meant "Super Brake", and it sported entirely new drum brakes, which have been designed by the company's founder, Dr Francesco Laverda.

At its heart, lies an air-cooled, four-stroke, 743cc, parallel twin cylinder powerplant mated to a five-speed manual transmission, and can produce 61 horsepower. In addition, telescopic forks in the front and dual shocks in the rear ensure superior maneuverability and a higher level of comfort for the rider.

This original SF series was built from frame number 3808 onwards. The coding SF (standing for 'Super Freno', or 'super brake') referred to the adoption of entirely new drum brakes designed by the company's founder, Dr Francesco Laverda. (The rest of the design was carried out by Luciano Zen and other members of Laverda's engineering team.) The majority of the production run featured a cylinder barrel-high exhaust connector tube connecting the two header pipes. Except for the brakes, this first SF was virtually identical to the 750S that proceeded it.

For the 1971 model year, the SF underwent a number of changes. The most important of these was a change from British Smiths to Japanese Nippon-Denso instruments, a new fuel tank (which no longer had the rubbers for the rider's knees), and an optional lockable storage box incorporated in the racing-type saddle.

The name Laverda is fairly new to the American motorcycling public, but the bike has been around for some time, having first been imported to this country as the "American Eagle." The Santa Ana, Calif.-based American Eagle firm is now defunct, but the Laverda is alive and well. Edison Dye, the West Coast importer of Husqvarna, is taking over where the Eagle left off. The flow of bikes and parts from Italy won't be of Japanese-style volume, but the situation is certainly better than no bikes at all. The Laverda is sound, and deserves an American audience. Could anyone; have imagined three years ago that the Laverda (American Eagle 750S Sport) would be the basis for one of 1971's most successful production road-racers? We'd have been inclined to say not. However, the sports-minded Italians at the Laverda factory modified their 750, fettled it as a 750cc. production racer and walked away with 1st, 2nd and 3rd places at Barcelona, Spain; 1st, 3rd and 4th places at Zandvoort, Holland, and 2nd, 4th and 5th places at Le Mans, France. These three races were all over 12 hours in duration and the factory-`team of three' machines finished each one with a high placing. Obviously wasn't just luck, and the 750 SF lives right up to them, reputation gained by its production road racer brother. There are two versions available. The GT, a milder version of the SF, features less compression, milder cams, no exhaust balance pipe, a dual seat, and small detail differences including a slightly less rigid frame and less steering trail to make it more suitable for in town riding and medium speed touring. The 750 SF, on the other hand, is a sporting man's motorcycle. Low, narrow (26-in.) handlebars, a headlight fairing and a short racing-type seat set the scene and rather rear mounted footrests make the rider feel like he's on a road racer. Quite heavy at 507 lb. with half-tank of fuel, the 750 SF is fairly clumsy at ultra-low speeds but loses this feeling at speeds above 20 mph or so and begins to feel like it should... a sports/roadster with a racing heritage.

The battery is also manufactured by Fiamm, but the generator, starter motor and headlight are Bosch units manufactured in Germany. The headlight is identical to the ones fitted to the pre-/5 series BMW machines and features a round key which is inserted to supply current for starting and running. A turn of the key in one direction turns on the taillight and parking light, and a flick in the other direction turns on the headlight. No kickstarter is fitted to the Laverda so it would have to be given the old run-and-bump treatment if the battery went dead. With a hot battery, starting is extremely rapid. Just close the handlebar-mounted choke lever half way, touch the starter button on the right handlebar and the engine bursts to life almost immediately. Even after killing the engine several times on purpose, the battery supplied enough current. to spin the engine effortlessly. Detailing is above average. A nifty compartment in the rear of the seat can be used to store tools (in addition to a holder under the seat and behind the battery) or small parcels. Aluminum alloy wheel rims are employed in an effort to reduce unsprung weight and beautiful stainless steel fenders with attractive shapes keep road dirt and moisture off the rider. A small handle is welded to the frame on the left hand side to give the rider a place to grab when putting the machine on the center stand. Chrome plating on the exhaust pipes and mufflers, which has been a weak point on some Italian machines in the past, appears better than average and the mufflers emit a sound that will gladden the heart of the four-stroke enthusiast. Deep and mellow, with just a hint of throatiness, the sound is just beautiful although spirited riding might arouse the local gendarmerie. The balance tube between the two exhaust pipes helps mid and top-end power somewhat and reduces the exhaust noise level a trifle. Other items of German manufacture are the Metzler tires, a rib pattern on the front and a block pattern on the rear. Surprises keep cropping up, even in front of the handlebars. Although calibrated in kph on our test machine the speedometer, as well as the tachometer, are manufactured in Japan and look suspiciously like they were swiped off a Honda CB 750. Aside from a thin looking paint job on the gas tank and side covers, the 750 SF is a superbly finished motorcycle, but we feel that most American riders would prefer slightly higher handlebars and a longer seat for toting their lasses around. But then, that's what the 750 GT is all about and it will be available for $60 less than the SF. Source Cycle World 1972