It came with a 3.50 -18 front tire and a 4.00 -18 rear tire. Stopping was achieved via 2x 280mm discs in the front and a single 280mm disc in the rear. The front suspension was a 38mm Forcelle Italia telescopic forks, preload, rebound damping adjustable while the rear was equipped with a dual Koni shocks preload adjustable. The 1000 Ago was fitted with a 1.32 Gallon (5.00 Liters) fuel tank. 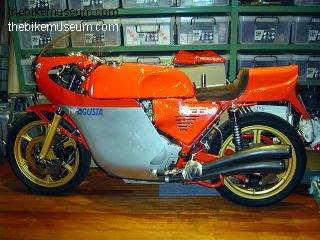 The 1981 MY MV Agusta 1000 Ago is a limited edition machine designed to honor one of Agusta's most successful racing riders, Giacorno Agostini. It addresses Agusta fans and collectors that want a powerful machine. At its heart lies an air-cooled, four-stroke, 954cc, transverese four cylinder engine paired to a five-speed manual transmission, and can produce 106 horsepower at 10000 rpm. In addition, it comes standard with 38mm Forcelle Italia telescopic forks and dual Koni shocks at the rear.