Power was moderated via the Wet, multi - disc with mechanical anti-surging device.

It came with a 120/70 ZR 17 front tire and a 190/55 ZR 17 rear tire. Stopping was achieved via 2x 310mm discs 4 piston caliper in the front and a Single 210mm disc 4 piston caliper in the rear. The front suspension was a Type "UPSIDE - DOWN" telescopic hydraulic fork with external and separated adjustment of rebound and compression damping and of spring preload Rod dia. 50 mm while the rear was equipped with a Type Progressive, single shock absorber with rebound damping and spring preload adjustment Single sided swing arm: material Aluminum alloy. The Brutale 1090R was fitted with a 23 Liters / 6.0 US gal fuel tank. The bike weighed just 190 Kg / 418.9 lbs. The wheelbase was 1438 mm / 56.6 in long. 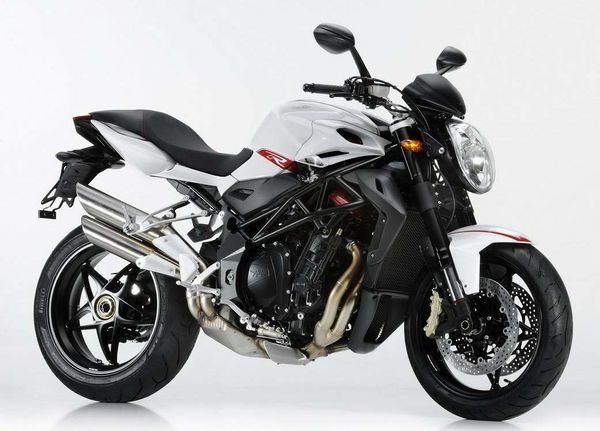 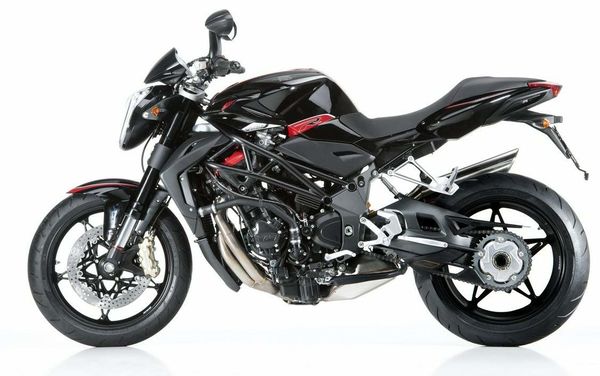 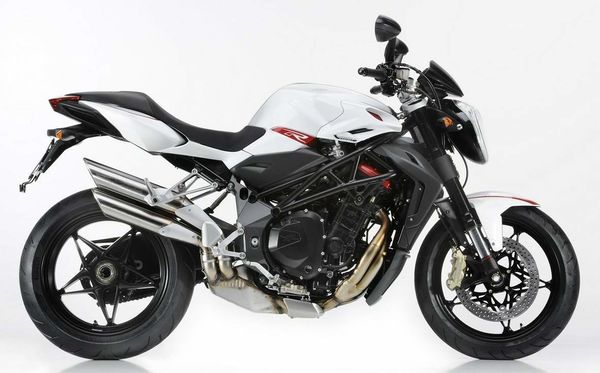 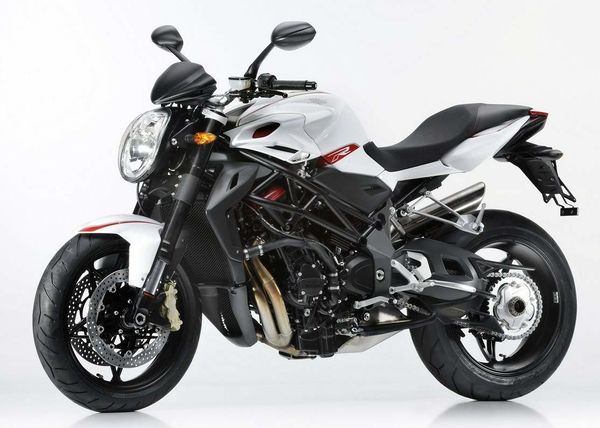 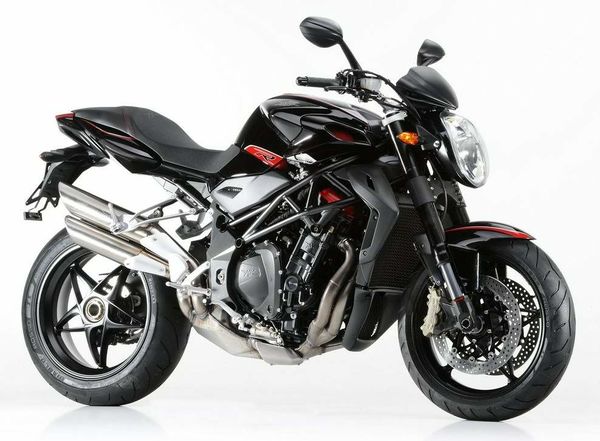 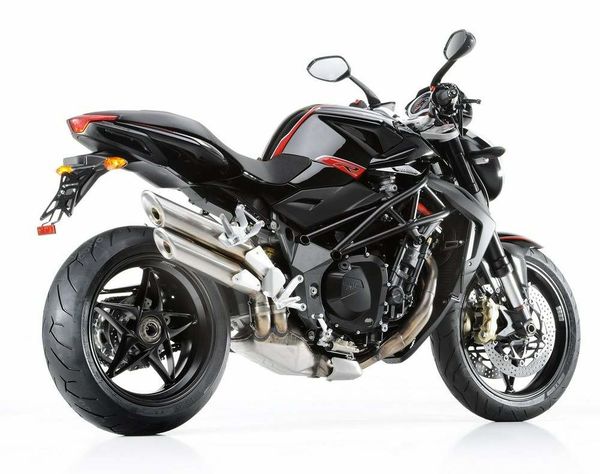 The success of the new generation of Brutales is in the spotlight due to its unmistakable design, advanced technology and exceptional performance. MV Agusta Brutale, a bike that has not only set the standard in the motorcycle market for excellence, but it has also become an authentic commercial success.

Lining up next to the Brutale 920, the entry level motorcycle in the MV Agusta four cylinder family, the new Brutale R 1090 is born and is the new market reference.

The MV Agusta model line-up is expanding with the introduction of the new BRUTALE 1090R. This incredible naked has enamored the motorcycle world with its unique design that has been to date unequaled. Ever since its introduction the BRUTALE has continued to be the leader in both design and performance. With the launching of the new BRUTALE, the most beautiful and powerful naked is now within reach of an even larger number of riders whom have always dreamed of experiencing the emotions only the BRUTALE can deliver. A new engine configuration, new chassis settings, a onepiece seat design with a focus on comfort, the BRUTALE 1090R offers a new interpretation of a high performance naked. A motorcycle that offers aggressive styling and raw performance matched with an intuitive chassis. A Brutale that is always incredibly easy to ride, has never been this comfortable and intuitive.

On a cost per performance basis, the BRUTALE 1090R is without a doubt the new reference in the naked sport category. A technologically advanced 4 cylinder engine with radial intake and exhaust valves , the same advanced engine control unit as the 1090RR paired with one of the most evolved chassis; the BRUTALE 1090R is able to easily tame even the most demanding roads and racetracks.

This advanced performance is also coupled with a new look, with the color black dominating the new styling of the radiator shrouds and seat. But, looks are not everything and a major focus was also placed on rider comfort with a re-designed single seat that improves both rider and passenger comfort during every day use.

The BRUTALE project continues to remain faithful to the original objectives, MV wanted to build the most compact and light weight naked coupled with a superbike chassis together with raw engine performance that would enamor even the most demanding motorcyclist.

The engine is the high performance 1078cc four cylinder with radial intake and exhaust valves, the largest displacement engine ever built by MV Agusta. It is a volcano of power and torque with 106 kW (144 hp) at 10.300 rpm.

The frame is a mix of steel and aluminum mated to a Marzocchi 50mm USD front fork and a Sachs rear shock, both with valving specific to the Brutale R 1090 capable of taming the most torturous roads and demanding race tracks. The Brutale R 1090 also employs a 190/55  ZR17 rear tire that guarantees optimal grip, even during the most extreme conditions.

The Electronic Engine Control Unit has been programmed with a mapping that has been developed specifically for this new model, combining an optimal engine control coupled with 8 levels of traction control that can be selected by the rider.

Brutale R 1090, raw power mated with ergonomics that have also been developed with a passenger in mind thanks to the new one-piece seat with increased dimensions and refined styling that you have come to expect from an MV Agusta.

The Brutale R 1090 is the perfect motorcycle for those who are searching for a motorcycle in its essential form coupled with exceptional performance and unique design.

The principle characteristics of the new BRUTALE are:

The new BRUTALE 1090R is without a doubt Brutale, but at the same time this is a new interpretation of the most admired naked in the world. The attention to detail is what makes this new model different and even easier to use in everyday riding. The single piece seat is both more comfortable for the rider as well as the passenger, the turn signals are no longer integrated into the mirrors but have been placed in a position for better visibility during city traffic, the suspension is now softer and more comfortable. A Brutale that is easier to use than ever before but with the same maniacal attention to detail that one has come to expect from MV Agusta. Just one look at the tubular steel frame, the anodized handlebars with pivoting clamps, the pure form of design of the shift and brake levers, the single sided swingarm and unique wheels and it clear why the Brutale is the most beautiful naked in the world.

The two available color schemes are black and white. The single sided swingarm along with the unmistakable styling make this new BRUTALE unique. A masterpiece of Italian Design, the attention to detail and monochromatic color schemes helps to highlight the technical details like the over-under side mounted exhaust and the original MV Agusta frame design integrating tubular steel and aluminum side plates.

1078cc for 144 hp: the new in-line four cylinder engine rises to the top of the naked motorcycle class. It derived from the base engine featured on the 990R therefore there are no variations in layout but it has been reconfigured for smoother more progressive throttle response, more solid, and harmonious than before, especially when opening-closing and when accelerating. The same 46 mm Mikuni throttle body assembly is used, with the installation of a non-return feed that is operated by Marelli 5SM electronics that feature a new 8 step traction control. As with the 990R, the engine crank case is 1.32 lbs lighter than the previous one, and is fitted with a counter-rotating balancing shaft to resist high-frequency secondary vibrations, which has been placed at the front of the engine and is driven directly by the primary transmission gear. The transmission ratios remain the same while the internal gearbox command mechanism is entirely new, redesigned to allow adopting a gear sensor, and to provide a smoother and more comfortable shift of the lever. The list of new components continues along the guidelines of the 990R: there is a new Mitsubishi, Neodymium-Iron-Boron generator that weighs a full 3.52 lbs less than the previous version; the lubrication circuit has also been entirely renewed, with a double rotor pump which is smaller and lighter (by 0.75 lb), but more efficient than the previous version. The circuit is no longer divided, as it was before, and the pump serves the radiator and the engine which are placed in series. The water pump, too, has been completely redesigned, and although it is 0.13 lb lighter than the previous one, its cooling capacity is up to 65% greater at low revs.

The BRUTALE 1090R shares its chassis configuration and geometry with the 990R and 1090RR as well as most of the chassis components. The frame is a mixture of a steel trellis structure and lateral aluminum plates that has become the trademark of MV Agusta since the first application on the F4, a frame structure that has been continually copied but never equaled by other manufacturers. The chassis dimensions are the same as on the other Brutale models offering a perfect dynamic balance and a precise response to rider inputs. With a 1430 mm wheelbase, 25° steering head angle and 103,5 mm of trail the new BRUTALE 1090R offers without a doubt the best balance of agility and stability. A technical feature the new BRUTALE 1090R is a new steering head which offers optimized rigidity for this type of naked which will without a doubt become the new reference for easy handling. Coupled with the revised steering head design is new suspension valving which is both softer and smoother to give the maximum amount of feedback even to less experienced riders. But, make no mistakes, the new BRUTALE 1090R is still Brutale, thanks to the infinite amount of tuning possible with the 50 mm Marzocchi USD front forks and Sachs mono shock. With just a few clicks you can easily transform the BRUTALE into a track weapon. BRUTALE is also known for its agility: coupled with the new Pirelli Angel tires the feedback from the tarmac is always immediate and the 190/55 section rear tire aids in putting down the 144 horsepower from the MV 4 cylinder engine. Performance of a supersport and handle of a middleweight, the new BRUTALE from MV Agusta continues to redefine the naked sportbike segment.