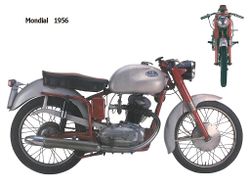 Mondial was established by Count Giuseppe Bosselli in Milan who recognised the need for economical transport to assist Italy in recovering from the ravages of the Second World War. In common with Count Domenico Agusta he realised that the best and quickest way of establishing his new enterprise in the minds of potential buyers was through competition, consequently the first machine to appear bearing the soon to be famous FB Mondial tank badge was a twin cam 125cc racing motorcycle. Campaigned during 1948 with considerable success the new machine went on to win the 1949 125cc World Championship.

The company introduced their first production roadsters in 1950, utilising 125cc pushrod engines displaying features inherited from the GP machine in their design and establishing a pattern that would see subsequent production machines benefiting from the firms success on the track. 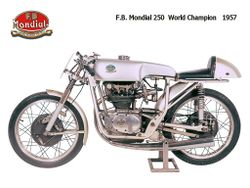