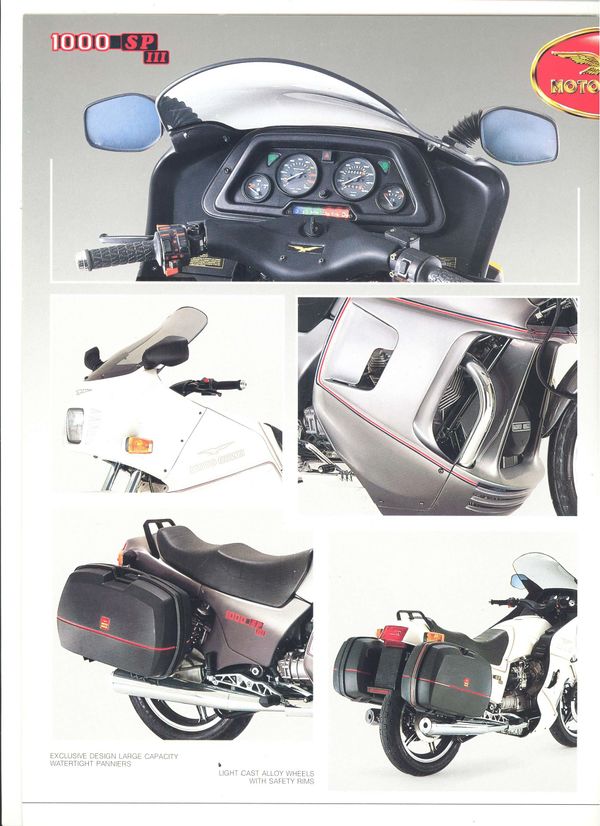 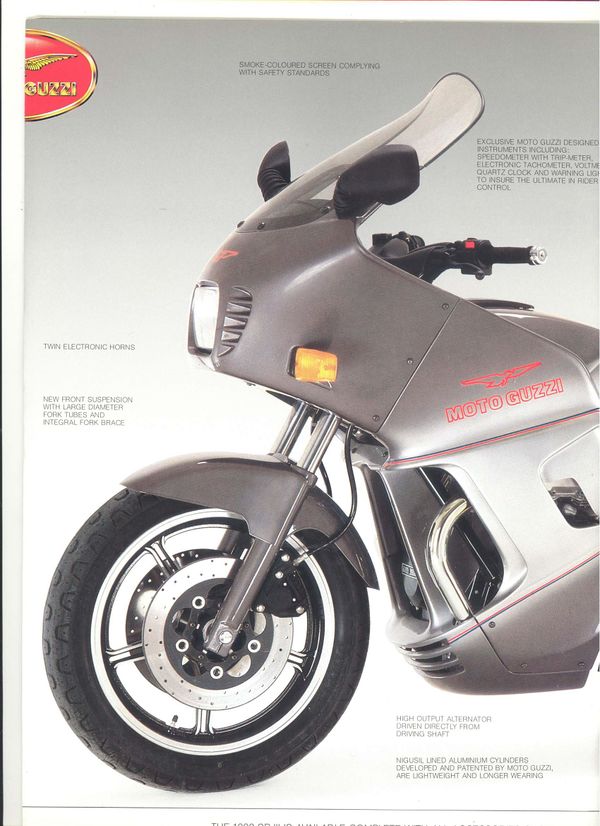 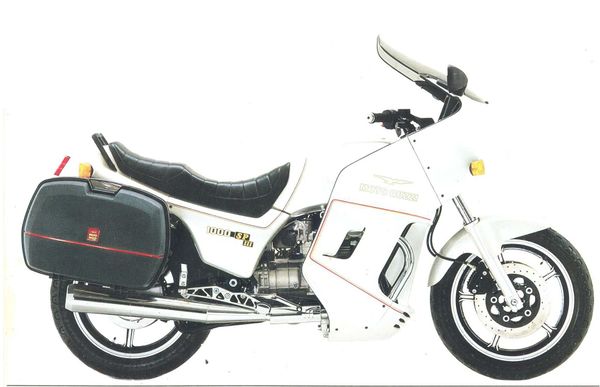 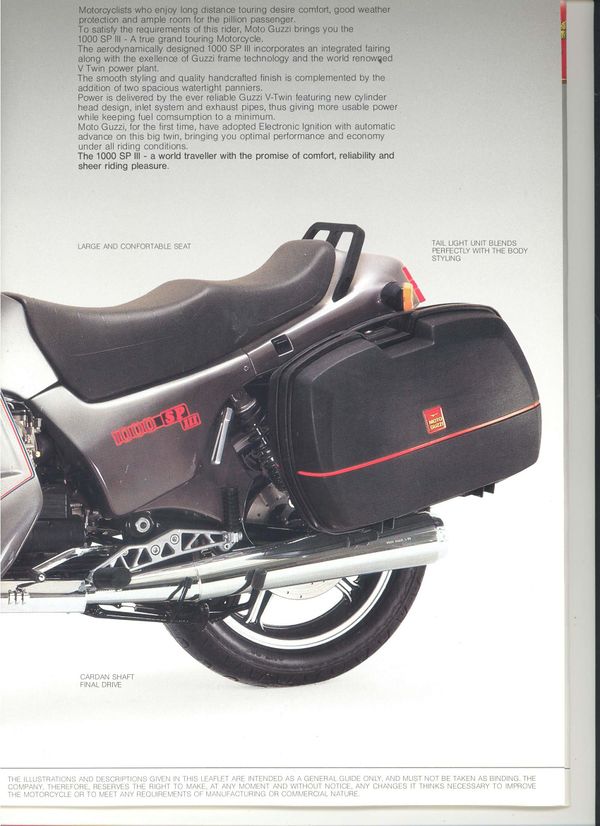 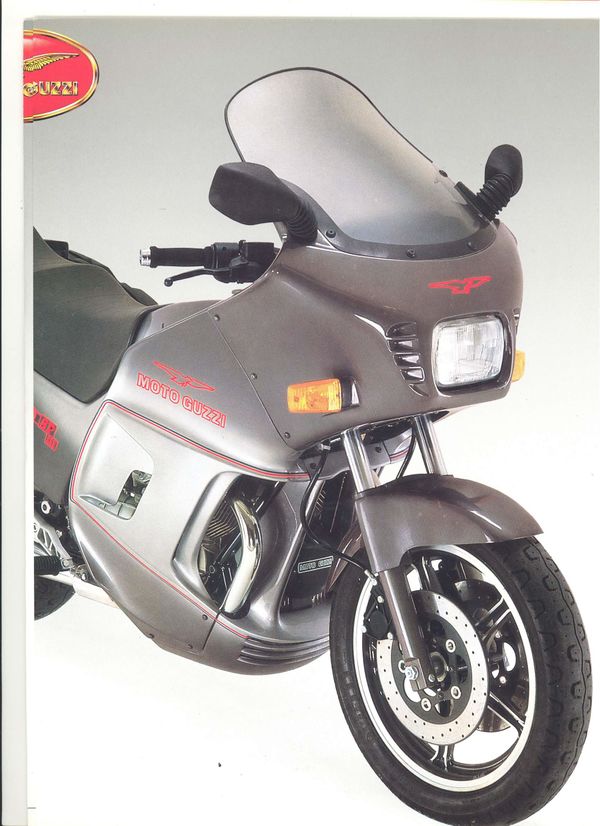 IT looks like being a case of "third time lucky" for Moto Guzzi's Spada III. The Italian motorcycle manufacturer's third attempt at a gentleman's tourer with a bit of oomph is by far its most successful. The original Spada, which came out in 1979, was let down by a poor quality of finish. Paint flaked and exhausts rusted quicker than was acceptable. The original Spada also had a spartan seat which was uncomfortable for both rider and passenger. But the pillion was doubly uncomfortable because upswept exhausts reduced leg room to a minimum. The Spada II, discontinued at the end of 1987, was a contradiction in terms. Moto Guzzi's traditionally stable handling was undermined by a 16-inch front wheel and a handlebar-mounted fairing. The small wheel was supposed to make steering quicker but instead it just made the front end twitchy. When the wind got up the fairing added to the problem making riding the second Spada anything but gentlemanly. To be fair the technically more advanced Japanese were also experimenting unsuccessfully with 16-inch wheels. But they soon returned to 17 and 18-inch sizes. Meanwhile there has been a hole in Moto Guzzi's model range for more than one riding  and buying  season while the Italians came up with a new Spada. It now looks as if the wait was worthwhile. The Spada III, which sees a return to 18 inch wheels front and rear, is a different bike to its predecessors. Of course its engine is Moto Guzzi's famous across-the-frame V-twin. But this has been uprated to compare favourably with the specifications of Moto Guzzi's top sports bike, the Le Mans 1000. The bore and stroke is the same as on all 948.8 cc Guzzis at 88 x 78mm. But the inlet valves are bigger and the exhaust valves smaller to match those on the Le Mans. The Spada III also has a sportier camshaft like the Le Mans'. Only the carburettors are the same as on the older Spadas at 36mm in diameter instead of the Le Mans' 40mm. This is to make the bike more civilised at lower revs. The Spada III is the first Moto Guzzi to have old-fashioned timing points replaced by an electronic ignition. The new ignition works by "magnetic- pulse", which means, as its name suggests, that a rotor passes over a magnet and sends a pulse to an amplifier which is then fed to a normal coil which produces the spark. An electric starter has been carried over from the Spada II. The tubular steel frame is the same except that it now has mounts to take the impressive looking full fairing. The fairing is made of fibreglass but instead of being layered it is injected to give a smoother finish. The fairing makes the Spada III look like a rival for BMW's KI00LT and Norton's Commander probably because it is tall and painted in oh-so-subtle grey. But the Italians typically beat the Germans and Britons on flair by using different shades of grey. There is a band of light grey across the middle gradually darkening to near-black at the top and bottom. The windscreen sweeps back further than on any other touring machine. Moto Guzzi has disposed of its own forks on all its big models in favor of ones by specialist maker and fellow Italian firm, Bitubo. But true to Moto Guzzi's philosophy of "simplicity sells" there is no anti-dive or any other superfluous gadgets on the new telescopies. Rear suspension is provided by traditional twin shock absorbers from Dutch firm Koni. Spring tension and rebound damping can be adjusted both front and rear. On the top of the forks is a knurled knob which affects the flow of hydraulic oil through the forks, adjusting rebound damping both up and down. Underneath the knurled knob is a nut which screws directly into the spring to adjust tension. At the top of the Konis is a four-position "diai-a-ride" knob for adjusting the hydraulic rebound damping while at the bottom is a three-position spring tensioner, adjusted by the traditional C-spanner.

The switchgear, awkWard to use on previous Guzzis, has been changed to look and function like Japanese controls. All the switches now fall easily to hand. The Spada III comes with a pair of panniers made by Italian firm Givi. Called Monokey, because one key unlocks the panniers and also releases them from the bike,.they are typically latin: large and round. Not particularly attractive to look at, in fact. Out on the road the Spada III inspires confidence. (Yes I know it's a motorcycle journalism cliche but it's true about this particular bike.) For a tourer the handling is excellent and the performance reasonable. The brakes are good. The Spada Ill's traditional frame, 18-inch wheels and long wheelbase make for very stable, predictable handling. The rider can choose a line around a corner, sweeping or tight, and know the bike will stick to it. But the Spada III is also light for its I.OOOcc tourer class. At 506lbs it weighs less than five- sixths as much as a BMW KI00LT (6221b) and has a 63 lbs advantage over Kawasaki's GTRI000 (569lbs). It weighs only I6lbs more than Honda's sports superbike, the CBR 1000. The result is the Guzzi leans more like the Honda than the BMW or Kawasaki. On even slow corners I found myself at angles I would not have believed possible for a big touring bike. The 949cc twin gurgles like a BMW boxer upto 3,000 revolutions per minute. Between 4,000 and 5,000 rpm the engine is transmitting its worst vibrations, especially through the handlebars. But while this is in the range where most riding will be done it is quite bearable. Beyond 6,000rpm, through the innovative (but is it necessary?) yellow warning line at 7,000rpm to the orange "redlme" at 8,000rpm the revs are going so fast the bike becomes smooth. Trust the Italians' colourful sense of style to interfere with even a rev counter. On the empty country roads around importer Three Cross Motorcycles' main shop near Bournemouth, Dorset, I was able to enjoy the Spada Ill's handling capabilities to the full. I was not however able to reach top speed although I did touch 110mph on a couple of occasions. (The A354 Salisbury to Blandford and A37 Dorchester to Yeovil are great roads.) Moto Guzzi  claim the Spada III pumps out 72 horse power and that it is good for a top speed of I22mph. I would estimate both figures to be only slightly on the high side as the bike easily reached the low 100s and still had more to go. Braking is by Moto Guzzi's linked system which has been around since 1975. The brake pedal operates both the rear disc and the front near-side disc. This works well for progressive controlled braking. It is possible to use just the brake pedal to bring the bike to a controlled, though not rapid, halt. But it is much better to pull on the front brake lever as well as this adds the force of applying the front off-side disc for a quick stop. The flip side to this unusual but impressive system is that during fast riding riders may want to use only the traditional "front brake"  in the Guzzi's case only one of two front discs and they could find this woefully inadequate. The gearbox was sweet. Virtually every change went in without complaining despite the gears being widely spaced with "long throws" between them. I only found one false neutral and then only once. It did not require any excuses like "positive" footwork. The shaft-drive, which was introduced on Guzzis with the V-twin engine back in the 60s, did its job without being noticed. There were none of the quirks, such as back-end sideways lurching, associated with some other shaft-drive motorcycles. At first the swept-back windscreen unnerved me because it points directly at the rider's face and its turned-up edge is only a few inches away. But it works (at least for riders of  average height like me). My helmet was not buffeted by the wind and it is easy for any rider to get down behind the screen boy-racer style if he is that way inclined. I found minimum damping and spring tension in the rear Konis, supposed to give a "smooth, luxurious ride", were far too soft even for solo riding. It made the Spada Ill's well-rounded Italian rear, which looks like it has had a little too much pasta, bounce around. However, although the Spada III has nowhere near as many suspension adjustments as Kawasaki's ZXR-750 most riders should be able to find a combination to suit them. I settled for the second damping setting and middle spring tension to cope with undulating country roads. This left higher settings for carrying a passenger or luggage or both. Pillions complained of a slippery seat and a flimsy grabrail (I prefer women holding on to me anyway) but had plenty of legroom unlike the first Spada. Source Motorcycle News 1988