Power was moderated via the Single-disc with integrated anti-vibration buffer.

It came with a 130/70 R18 front tire and a 200/60 R16 rear tire. Stopping was achieved via 2x 320 mm stainless steel floating discs, Brembo radial callipers with 4 horizontally opposed pistons in the front and a Single 282 mm stainless steel fixed disc, Brembo floating caliper with 2 parallel pistons in the rear. The front suspension was a Standard swingarm, Ø 46 mm, with radial caliper mounting bracket and telescopes on the stanchions while the rear was equipped with a Swingarm with double shock absorber with adjustable spring preload.. The California 1400 Touring was fitted with a 20.5 Liters / 5.4 gal fuel tank. The bike weighed just 322 Kg / 700.8 lbs. The wheelbase was 1676.4 mm / 66 in long. 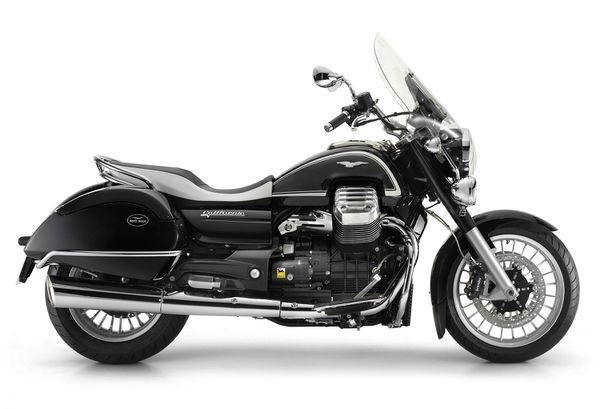 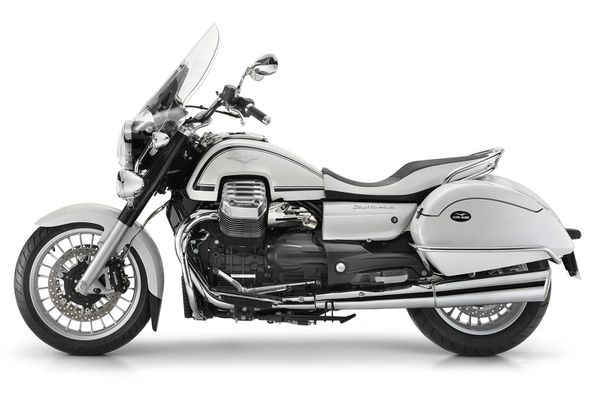 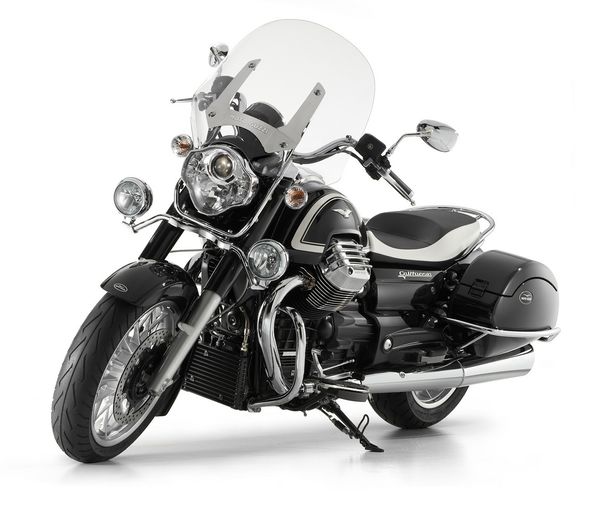 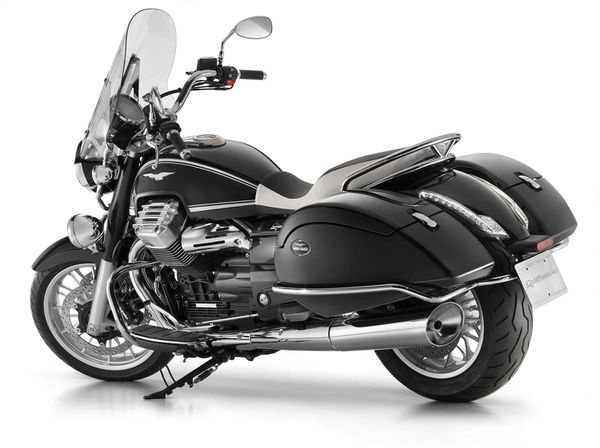 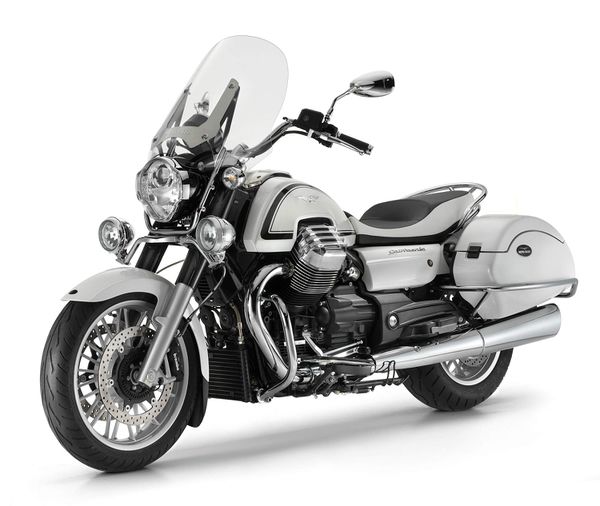 With the California 1400 project Moto Guzzi redefines the concept of the luxury bike, polarising it into two opposite personalities in style, but combined in the expression of reference technologies and performance.

The emblem of a culture and capability of building unique bikes since 1921, the California 1400 Touring and Custom models are assembled by hand in the Mandello del Lario plant and, with their innovation and style, they represent the turning point in Moto Guzzi history, one of the oldest and most respected brands in motorcycle history.

1. FROM THE USA TO THE REST OF THE WORLD.

On the streets for more than forty years, the Moto Guzzi California is the most famous Italian bike in the world.

Its career began in 1970 when, after a series of stringent tests, the Moto Guzzi V7 Police won the selection to enter the LAPD (Los Angeles Police Department) fleet. For the first time a foreign bike had won a contract in America to supply the Police, beating out, in addition to the national manufacturer, the best English competition.

News of these stars & stripes uniformed Moto Guzzi bikes generated great interest in Europe as well, strengthening the excellent reputation that the V7 achieved with the 700 and Special versions. From the photographs of LAPD and Highway Patrol officers, however, it is clear that this Moto Guzzi V7 is decidedly different from the ones sold in dealerships: oversized saddle, bullhorn handlebars, platform footrests and an overabundance of chroming.

These are elements that gave the V7 a popular Americanised style and stimulated a demand so strong that it convinced Moto Guzzi to begin factory production in 1971 with the name California.

Since then seven generations and four engine capacities (750, 850, 1000, 1100) have alternated in more than one hundred thousand units manufactured: a success.

Well known by all, loved by many and literally revered by long distance riders, during its forty year career the Moto Guzzi California has patrolled the American freeways, escorted monarchs and presidents and been parked in the garages of cinema divas and rock stars, becoming a reference point in motorcycle history.

More than any other model manufactured at Mandello del Lario, the California represents the values and strength of the Moto Guzzi brand: style, comfort, reliability and performance.

Success motivated by a rare quality: knowing how to reconcile the comfort and cargo capacity of a custom bike with the dynamic nature and performance of a powerful street bike.

Designing the heir to the most famous Moto Guzzi in the world meant taking on a great technological and economic challenge in order to replicate, like in 1971, the new reference point for the category. An impressive bike, exclusive, capable of enhancing the elements of nobility of a brand which is the symbol of made in Italy.

Starting from the stylistic intuition of an innovative but recognisable design and coherent with the heritage of seven California generations manufactured until today, the main distinctive Moto Guzzi traits were redesigned with the most advanced technologies of the top European motorcycle group, achieving a series of results such as:

The largest twin cylinder engine ever made in Europe, able to produce an explosive torque of 120 Nm at just 2750 rpm. The first custom in the world equipped with MGCT traction and multimap Ride by Wire technology, with the possibility of selecting three different power output curves: Turismo, Veloce and Pioggia. The first custom in the world with a headlight assembly equipped with LED DRL daylight running lights, like the system used on late model cars. A brand new double cradle frame equipped with an elastic support system capable of completely eliminating vibration transfer. A new cardan final drive, at the top of the category for smooth and quiet operation.

Even looking closely at any other detail of the new California 1400, from the wheels to the instrument panel, from the components to the quality of the paint and the assembly, the magnitude of the change is clear: these Moto Guzzi bikes definitely represent a turning point in the brands history.

4. DESIGN: THE MODERN LINES OF A LEGEND.

Elegant, with a spectacular visual impact, the lines of the 1400 California convey unmistakeable Moto Guzzi class and tradition combined with never before seen size and technology.

Surprising in the smallest details as well as in its components, the design of the new California maintains a virtual continuity with its ancestors despite not having even one element in common with them.

The stylistic hints are in the saddle profile, the chromium grab handle and the side panels inspired by the T3, as well as a size ratio between the fuel tank and engine which favours the latter, precisely like the style of the V7 and V850 ancestors.

This impression is fed above all by the ingenious fuel tank, made of metal, with a 21 litre central body and two side panels, where the Eagle logo is lodged, moulded over the powerful head guards of the new 1400 cc round head engine.

Nestled within the V formed by the twin cylinder engine, the fuel tank contributes to making the side view significantly lower and more slender, also due to the clear lengthening of the wheelbase which is now 1685 mm instead of the 1560 mm from the last California 90.

The impression is further accentuated by the horizontal flow of the shiny silencers which end at the rear mudguard, moulded over the impressive 200 tire and equipped with a spectacular dual LED taillight assembly which also houses the turn indicators. The front view is no less spectacular with a complex surface headlight that has a polielliptical light equipped with DRL daylight running light illumination, an absolutely exclusive feature, making it immediately recognisable.

The particular polygon shape of the headlight dominates the luxurious front end, enriched in proper California tradition by the indispensable windshield and supplementary lights.

More than thirty years after the T4, lightweight alloy wheels reappear on the California 1400, now with an original ribbed design. The huge cross section of the 200/60-16 rear is striking, while the front mounts a more ordinary 130/70-18 size.

The 46 mm front fork is another reflection of its glorious ancestry: completely sealed by the imposing black telescopes, the style replicates the units which equipped the first V7 and V850 models. The riding cockpit is a perfect example of the marriage between design and technology that brings the new California to life. The instrument panel stands out for its attractive style and visibility, enclosed in a circular panel which is an impressive 150 mm in diameter with the analogue RPM indicator scale carved out along the outside of the multifunction, suspended full matrix display at the centre. The covered handgrips are also new, as well as the bullhorn handlebar and the electric blocks where, on the right hand the rider can, for the first time on a Moto Guzzi, engage the cruise control.