From CycleChaos
(Redirected from Motorcyclists)
Jump to navigation Jump to search 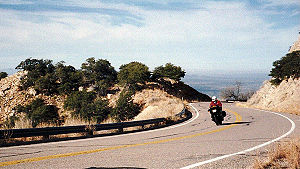 A motorcycle ride up Kitt Peak in Arizona 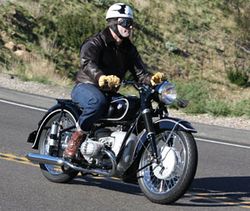 Motorcycling is the act of riding a motorcycle. A variety of subcultures and lifestyles have been built up around motorcycling. 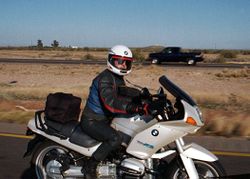 A motorcycle rider in Arizona 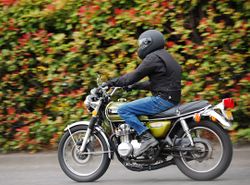 A motorcyclist wearing a full-face helmet with a visor 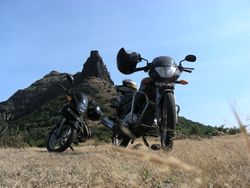 Bikes at backdrop of Purandar fort near Pune, India

Robert M. Pirsig's book Zen and the Art of Motorcycle Maintenance (1974) was a paean celebrating motorcycling. Pirsig contrasted the sense of connection experienced by motorcyclists with the isolation of drivers who are "always in a compartment", passively observing the passing landscape. In contrast, Pirsig argues that a motorcyclist is "completely in contact with it all... in the scene." [1] The process and experience of motorcycling forces the rider into the present. The environment of the road engulfs the senses, and the need for constant awareness fills the mind. The total involvement in motorcycling leaves little room for worrying about tomorrow, or second-guessing yesterday.

Many motorcyclists ride as a way to relieve stress, to "clear the mind." Despite the fact that Zen and the Art of Motorcycle Maintenance speaks very little about motorcycle maintenance, or Zen, some enthusiasts believe the link to be a natural one. Zen is a branch of Mahayana Buddhism which strongly emphasizes the practice of moment-by-moment awareness and of "seeing deeply into the nature of things by direct experience." Motorcycling demands moment-by-moment awareness and, unlike driving, rewards the rider with direct experience.

Hunter S. Thompson's book Hell's Angels includes an ode to the joys of pushing a motorcycle to its limits on the open road: he states that "with the throttle screwed on there is only the barest margin, and no room at all for mistakes... that's when the strange music starts, [and]... fear becomes exhilaration [and the]... only sounds are the wind and a dull roar floating back from the mufflers. [2] Similarly, T. E. Lawrence wrote of the "lustfulness of moving swiftly" and the "pleasure of speeding on the road" on a motorcycle, which he compared to the sensation of "feel[ing] the earth moulding herself under me", coming alive, and "heaving and tossing on each side like a sea." [3]

Milan Kundera also noted that "speed is the form of ecstasy the technical revolution has bestowed on man"; unlike a runner, "when man delegates the faculty of speed to a machine" such as a motorbike, "from then on, his own body is outside the process, and he gives over to a speed that is noncorporeal, nonmaterial, pure speed, speed itself, ecstasy speed." [4] Not all motorcyclists have a "need for speed", but many do. Speed draws many people to motorcycling, because the power-to-weight ratios of even low-power motorcycles rivals that of an expensive sports car. The power-to-weight ratio of high power sport bikes is well beyond any mass-production automobile. All for a fraction of the price of those automobiles.

High speeds on a motorcycle can also be more exhilarating than high speeds in an automobile. Not only is the sensation of speed greater since the rider is not separated from the environment of the road, but motorcycles negotiate turns by leaning. And the greater the speed, the greater the lean, sometimes to the point of scraping parts of the motorcycle on the road. Some riders will point proudly to the worn-away parts of their motorcycle, proof that they take turns so fast that they must lean the motorcycle over to the limits of its capabilities.

Motorcycling is a more dangerous means of transport than other road alternatives: the relative risk of a motorcycle rider being killed or seriously injured per kilometre travelled is around 54 times higher in 2006 than for car drivers.[5] However, motorcycling is less dangerous than many other popular outdoor recreational activities, including horseback riding.[6]

To address motorcycle safety issues, motorcycle-specific training and personal protective equipment is important for motorcyclists' survival on the road, and mandated in many countries and several U.S. states and counties.

The motorcycling lifestyle spans across different motorcycling groups but transcends many countries and cultures. 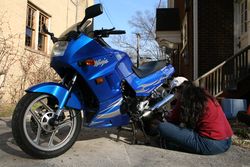 Maintenance on a Kawasaki Ninja 250 motorcycle

Motorcyclists will refer to maintenance or repair of a motorcycle as wrenching, as in "turning a wrench." UK motorcyclists refer to a wrench as a "spanner", and the activity of working on the bike is similarly known as "spannering". Melissa Holbrook Pierson points out that the do-it-yourself self sufficiency is "part of [motor]bikes' allure in an increasingly monolithic, unfixable world." She also claims that motorcyclists "become a member of a community, linked first and foremost to anyone who rides; when another [motor]bike passes, you...[w]ave, and perhaps [give] a thumbs-up."[7]

Historically, wrenching was a necessary skill for riders, since the materials and technology used in motorcycles often meant that repairs had to be done on the road-side miles from home. Modern motorcycles are as reliable as automobiles, but the feeling that many riders have that their motorcycle is more than just a means of transportation leads them to want to do any wrenching on the bike themselves. This drive to wrench reaches its zenith with rat bikes. Riders of rats eschew paying anyone else to work on their motorcycles on principle, and therefore do all their own wrenching.