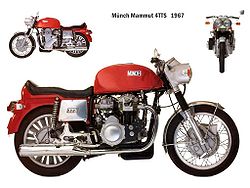 Munch is a motorcycle manufacturer headquartered in Wurzburg, Germany.

German engineer Friedel Munch created car-engined gargantuan bikes. Munchs were some of the most expensive and biggest bikes on two wheels. Earlier Munch motorcycles were powered by an aircooled, 1000cc, 4 cylinder NSU car engine, held in a monster chassis formed around a twin-shock, tubular steel frame. By the 1990s Friedel had built over 500 of these bikes, some with engine capacities of up to 1996cc and weighing over 350kg. The most recent of these monstrous creations was the turbocharged Titan 2000, which produced 150bhp and featured a hydraulic center-stand.

The Munch Mammoth was a 1300cc was the most powerful motorcycle of its time. The Mammoth, largely due to its expensive $4000 price tag, was not purchased in great quantities.