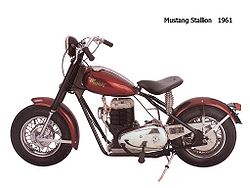 The Mustang was a miniature motorcycle built in Glendale, California by John Gladden from 1945 to 1963. Most models featured a proprietary single-cylinder side-valve engine of 320cc and 12" wheels.

This upright Briggs was coupled to a 3-speed British "Burman" motorcycle transmission with heavy chain drive then continued by chain to the 5.00x12 tractor tread rear tire, wheel and the cheater size drive sprocket. The front disc wheel had a diamond tread 4.00x12 tire.

Shifting the 3-speed transmission was accomplished with a hand operated muliplate disc clutch housed on the left side of the engine. Starting was by a manual choked carburetor and folding kickstart. Shutting down was with a kill-button. This was a foolproof and rugged combination.

The telescoping spring fork made this machine comfortable and very controllable at speeds into the 30's. The handle bars folded down from an overall height of 40" to 32".

The entire frame and the steel full disc 12" wheels left the Glendale, CA factory painted a bright yellow. This machine would climb a vertical wall.

These are a highly sought after collectible today.

The tank of many Mustang mopeds were used on choppers in the 1970s, coining the phrase 'Mustang-style gas tank'. 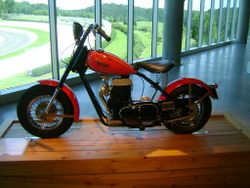 Not to be classified as a scooter such as a Cushman, the Mustang was a miniature motorcycle, but only in size, not in performance. In the 1950s Mustang's claim to fame was winning the Catalina Grand Prix, a cross country classic held annually on Catalina Island, off the California Coast.

Ridden by Walt Fulton, the little Mustang showed its heels to a field of European dirt bikes. Immensely popular in their day, they remain a very desirable machine.