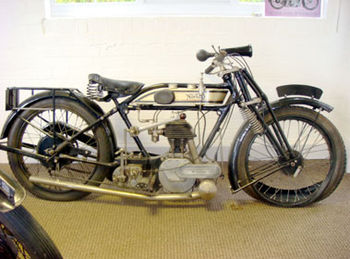 James Landowne Norton founded the Norton Manufacturing Company during 1898 in his home city of Birmingham supplying components to the established cycle industry and also to the newly emerging motorcycle industry. By 1902 he had produced his first motorcycle employing a French clip on engine and over the next five years developed both the frame, lowering and elongating the basic cycle structure in order to mount the engine (and later the gearbox) within the frame structure and his own engine design which was introduced during 1907. When machines became available to the public in 1908 the prototypes displacement of 660cc had been reduced to 633cc. Equipped with aluminum crankcases and an iron head and barrel the new engine established a pattern that would run until 1954 and introduced a name to the motorcycling vocabulary that is as well regarded today as it was in the Edwardian period - the Big 4. 1909 saw the introduction of a smaller 475cc engine which, although not particularly successful in its own right formed the basis for a revised model introduced in

Tracing its lineage back to 1911, the Norton 16H was by turns a TT racer, wartime dispatch bike and family sidecar slogger, in a remarkable career that spanned 33 years. In all that time the engine's basic layout remained unchanged - it was simply that the world moved on around it.

In 1911, the Isle of Man TT included a 500cc Senior class for the first time and Norton had a new design ready to contest it. A side-valve of 490cc with dimensions of 79 x 100mm bore and stroke, it was listed as the 3 1/2. Founder James Norton rode one of the firm's entries himself but failed to place. Yet, the very next year, a similar bike won the Brooklands TT and three world records in one event. In 1913, versions on sale included the Brooklands Special (BS) and Brooklands Road Special (BRS), which with their single-speed belt-driven transmission were guaranteed to have lapped Brooklands at more than 70mph (65mph for the BRS), while many were capable of exceeding 80mph.

A chain-driven version was developed but with World War 1 intervening it was 1919 before the 490cc Norton was back in civilian production. The catalogued Model 16 now featured chain-drive with a three-speed Sturmey-Archer gearbox and was directly related to the competition bikes that were holders of some 21 world records. In 1920, at the first post-war TT, half the finishers were riding Norton’s.

The next year, Norton launched a new model, called the Norton Colonial. Aimed at the expanding market in less developed areas of the Empire, it had a higher ground clearance that the standard bike, which gained an even lower riding position and a new designation - the Norton 16H ('H' for Home) model.

In 1922, Norton's race development effort switched to the newly designed overhead-valve Model 18. Out of the spotlight, the Norton 16H found a new role as a popular sporting tourer. The engine was reworked in 1931 but the next major change came in 1936, when after earlier successful trials, the army began to place regular orders for 16Hs (modified for off-road use). Continued right through the war, more than 80,000 were delivered, spanning a decade in all. Some bikes stayed in service until the late 1930s.