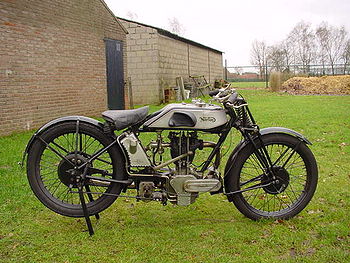 This model (Model 1) was launched in 1908, and was the first Norton machine to incorporate a Norton manufactured engine, previous ones having been bought in from other sources such as Peugeot. The engine was a side-valve one, with a characteristic cylindrical silencer which lay across the front of the engine.

It started out as a belt drive machine but gained a chain in 1915. There were various modifications to the design, particularly for 1931 when, amongst other things, dry sump lubrication was introduced and the front mounted magneto was moved to the rear. The right hand side exhaust system was adopted in 1932 and a four speed gearbox was optional for the following year.

The Big 4 was a particular favourite of James Norton himself and in the early '30s he toured South Africa on a Big 4 combination, covering several thousand miles and hoping that the fresh air away from the industrial grime of Birmingham would improve his ailing health. Ideas for machine improvements were incorporated on his return to England.

Like the Norton 16H, these machines were also used in the war and both there and in civilian use could frequently be seen with a sidecar attached. From 1948, the original 82mm x 120mm engine dimensions (633cc) were reduced to 82mm x 113mm (596cc). Developments ran side by side with the 16H, both machines having the laid down gearbox from 1950; better brakes and a petrol tank increased in capacity from 2.75 gallons to 3.5 gallons in 1951; a long awaited change from a saddle to a dual seat in 1953; and an 8" front brake in the following year. Power output from the later versions reached 14bhp, from a machine weighing 413lbs.

In 1954, production of the Big 4 (and its 490cc counterpart, the Model 16H) ceased as the popularity of side valve machines waned rapidly. It had been manufactured for over 40 years unbroken by wartime, albeit in a number of quite different forms. 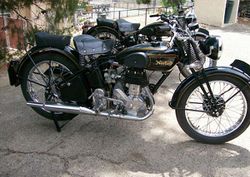 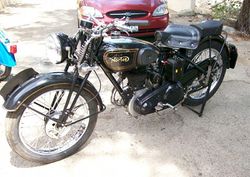