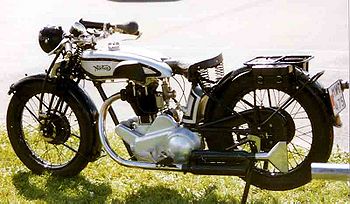 By the late 1920s racing had long been a main force behind Norton's development, although the pace of technological change had accelerated rapidly. Until the beginning of the decade the main sporting effort had been carried by the firm's simple side-valves, but in 1924 it was the new pushrod Norton Model 18 that carried the factory to victory in the first TT since 1907. All that was about to change, for a scant three seasons later, the first of a long line of overhead-camshaft Norton’s was to appear.

The Norton CS1 standing for Camshaft One, was the brainchild of Walter Moore, a brilliant designer who had joined Norton after stints at Douglas and ABC. Although he had been instrumental in the Model 18, Moore had long favoured the overhead-camshaft layout. After Velocette achieved a win in the 1926 junior with their new 'cammy' model and following rumors of other similar developments, Norton got the spur they needed. Taking up a design he had already sketched out, Moore laid down the machine that would carry Norton's works effort in 1927.

The bottom end closely followed the traditional Norton design but cast into the side of the crankcase was a housing for the oil pump and a pair of bevel gears. These drove a long shaft housed in a tube running up the side of the barrel, splined to a second paid pair of bevel gears driving the overhead-camshaft. The new engine was then fitted into the factory's full cradle frame, which had a separate forging linking the front and rear tubes, housing the three-speed gearbox and the engine. A true saddle tank was fitted, concealing a frame that had to be tall, in order to accommodate the great height of the overhead-camshaft engine.

The new machines were ready for the 1927 TT, an event which they dominated in the hands of works riders Stanley Woods, Joe Craig and Alec Bennet. The next year a 348cc version appeared and in 1929 was shown as the CJ junior model. Although there were few racing honors in either year, the CS continued to show its superiority and might have continued to do so for many years, were it not for the departure of its creator.

Walter Moore accepted a lucrative offer from the German company NSU, for whom he would create a number of influential bikes before he left with the outbreak of war. One of his first designs, however, was so closely based on the Norton CS1, apart from using a four-speed gearbox, that the new 1930 NSU Rennmaschine was jokingly dubbed 'Norton Spares Used'. Moore claimed the original design had been done in his own time and there was little that Norton could do to prevent him. They rapidly put together an alternative design, while Moore's NSUs were good enough to keep racing until 1935.