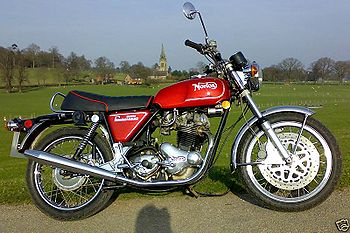 The 750 Commando has been the Machine of the Year for five years running and the 850 is the first real development of the basic Commando since it was introduced!

The 850 is very much the same as the standard Commando with its cycle parts, but it's the motor which is most interesting. The new iron barrel has a bore of 77 mm while the standard 750 is only 73 mm. It is simply this increase in size which gives the extra power.

One of the most important points about the new motor is the effort Morton’s have made to make it more reliable and easier to ride.

The compression ratio is lower than the 750: 8.5 against 8.9:1 and the carburetor size is the same at 32 mm. This helps produce not only more power than the 750 but, very important, more usable power.

Other firms have produced big-bore kits for the Commando, but they have never made any attempt to beef up the bottom end. The 850 is strengthened considerably where it matters. The four outside cylinder-head bolts pass through the barrel and screw into the crankcase. This should reduce the possibility of the barrel trying to lift off the cases and also cuts the loading on the cylinder-barrel base.

The main bearings are what Norton’s describe as "high-capacity, super-blended, large-diameter, roller main bearings", which apart from sounding like an advert for margarine means that the bearings are normal roller bearings with a slight taper on the ends. This will give the advantages of the roller bearing for load capacity and the advan­tage of taper rollers for isolating the crankshaft from too much end float.

These modifications to the motor should result in a longer life. But it is not only in this department that Norton’s have been busy. The crankcase breathing system has been revised. The breathing is now done from the back of the timing cover It was found with the old system, that when the engine was being held at high revs for any length of time, that a lot of oil came up the breather and this resulted in a build-up in pressure in the cases, which caused oil leaks.

The new breathing system will be more efficient, and with legislation becoming more strict about emission control, the new 850 Norton should have no trouble complying. The silencers, too, have come in for some development. They are really quiet and certainly won't give the Noise Abatement Society anything to complain about.

What's it like on the road? Really good. The motor is smooth and flexible and there is so much usable power, I never had any trouble when overtaking.

The really impressive feature of the motor is the way it doesn't seem to matter what gear you're in when you want acceleration. More than once I managed to get into second gear instead of first at traffic lights because the gearbox works the opposite way round to that which I am used to, but even in second gear there was no need to slip the clutch to get really good acceleration.

To find out the standing-start quarter-mile times, we took the 850 to the Santa Pod Drag Strip.

We entered the Norton at the season opener meeting on April 1 and the results were very impressive. On the day there was a headwind of between 30 and 40 miles an hour, which was slowing the times of all the bikes and causing some of them real handling problems. Fully road equipped, that means in­cluding the baffles in the silencers, a full tank of petrol and full toolkit.

The Norton was running in the 13.9-second bracket all day long, and. there is no doubt, that without the headwind the Norton would have no trouble in getting down to about 12.8 or 12.9 seconds.

In a straight race against a 750 Commando, the 850 was a lot quicker over the first eighth mile and was still pulling away slightly on the last part of the strip. I apologise to my pit crew of Colin Sanders and Denis Gawler and the Motor Cycle Mechanics fan club for pulling a red-light in the first round, but I think the Norton did prove that in standard trim it has a lot of acceleration, especially as it was racing against machines, most of which have been set up especially for Drag Racing.

Although the drag racing session was interesting, I don't expect the majority of owners are really interested in a split second difference in standing quarter-mile times, but I did use the Norton as much as possible under very varied road conditions, London rush-hour traffic to deserted twisting country lanes and the motor was always perfect. However, there were one or two minor complaints about the handling.

On the rare occasion I had to shut the throttle halfway round a corner, the frame felt like it was hinged in the middle. And when I checked, I found that the swinging arm had enough play in it to fail the MoT test.

When Charles Deane rode the bike, he thought the front end was too light and, if the power was put on hard going round a corner, the front wheel became light enough for the bike to want to go straight on. Charles and I are about the same size and weight and yet I had no problem with a light front end, which either means that we ride a bike differently or, more likely, that "the Ed" goes a lot faster than me!

I used the bike quite a bit for night riding, and fortunately our model was fitted with a quartz halogen headlight. This light was so good that I would not consider buying a Commando without one.

Although I really enjoyed riding the Norton, both the editor and I have two identical complaints. The first is that the seat is far too high, and although it only measures 32 in. off the ground, it's so wide it feels more like 36 in.

It would be no problem for Morton’s to lower the seat on this bike as there is enough room for it to be dropped at least 2 in. All that needs to be done is to make a new seat base.

The other complaint is also caused by the seat height. The only way I could get a good swing on the kick starter was with the bike on the centre stand. When I tried to start it off the stand, it turned into a Sammy Miller balancing act, with the likelihood of me and the bike toppling into the gutter!

Once underway, the height doesn't matter, in fact the riding position is really good. The footrests are high and the tank is wide enough to grip comfortably between the knees. Also, the seat is well shaped to stop even weak-armed riders like me from falling off the back.

With its fantastic, perfor­mance, the Norton would be dangerous if it didn't have the brakes to match. The front was deceptive, because it had a very wooden feel. However, it never locked the wheel and I never felt that there was any chance of the bike not stopping in time.

The lack of feel could probably be overcome by giving the brake slightly more leverage, at the same time providing a method of adjusting the gap between the lever blade and the handlebar.

The back brake is superb. The design is the same as that used on Morton’s since the days of the Featherbed Dominators. Odd to say, but in those days it never used to work particularly well and, although there are no obvious improvements, the brake is very smooth and does not suffer from fade no matter how hard it is used.

Neither the clutch nor gearbox could be faulted. No matter how much the clutch was slipped it always took up the drive cleanly. Gear selection was always posi­tive and never once did I miss a gear, even when I did clutchless changes. This is one bike that does not need the complication and expense of a five-speed box.

Norton’s are the only firm still making a gearbox with a one up three down pattern and this can cause confusion. Perhaps it is time they changed the pattern to be the same as other manufacturers.

This new Commando would be my choice for the "Machine of the Year" if it wasn't for so many points of criticism over quality control. Maybe our model had been badly treated by who­ever had tested it before, but we had considerable trouble during the first week we had the bike.

One of the bolts which holds the inner chain case to the crank-case had come undone because its tabwasher had not been properly done up.

The bolt had smashed its way through the inner chain case When we took the outer cover off, there was an even bigger horror inside. Somehow the triplex primary chain had only been fitted to two runs of the engine and clutch sprocket. I would have thought it im­possible for the chain to have jumped a complete row of teeth, which means the chain must have been put on wrongly.

We are never sure if the bikes supplied to us for road test are the best of the range or if the manufacturer cleans up a development model just enough for "mad" journalists to wreck. But if the Commando was supposed to be a good example of this model, then Morton’s have some rethinking to do on their quality control.

Within 1500 miles our Norton was starting to look very second hand. We had rust on the cylinder-head bolts, rust on the barrel and on the centre of the front disc.

The exhaust pipes had turned a very attractive shade of blue and the motor was running slightly rich. In places, the frame appeared to have no paint on it. The cross tube under the motor and the front engine mounting had started to rust.

The rear chain oiler had lubricated everything from the pillion footrest back, except the rear chain. There was no possibility of the nearside front fork leg rusting, there was too much oil leaking for that to ever happen and the white lining and top layer of paint on the back of the fuel tank had been worn away by the riders' knees. All this on a very expensive motorcycle which should be an advert for the quality of British engineering. It's not good enough!

I like the Norton, but if they are hoping to sell this new model to anyone apart from founder-members of the Norton Owners' Club, they are going to have to crack down on the standard of workmanship. The design is very good, it combines the best of the traditional; separate gearbox, a reliable fuss-free motor that is easy to work on, with enough new features to make it an attractive bike. But who wants to buy a new bike and have to spend time working on it instead of riding it?