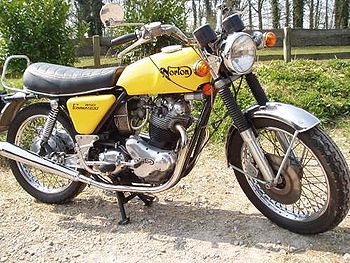 In January 1973 the Norton Mk 5 Fastback was launched and the 'Long Range' was discontinued, foreshadowing the first 850cc machines launched in April 1973. The 'Roadster', 'Hi Rider' and the 'Interstate' all began to use a new 828cc. engine, which had similar power to the 750cc models but were less stressed.

1973 also saw the start of development on a new machine with a monologue pressed steel frame, that also included a 500cc twin, stepped piston engine called the 'Wulf'. However, as the Norton Villiers Triumph company was again in serious financial problems, development of the 'Wulf' was dropped in favor of the rotary Wankel type engine inherited from BSA. In late 1973 redundancy notices were issued at Andover, followed by a sit-in at the works. The Conservative Government withdrew the subsidy in early 1974, restored by the Labour party post the general election. NVT resultantly decided to concentrate production of the Commando at Wolverhampton and Small Heath, causing unrest at Meriden which resulted in a workers' sit in and stopping production at Small Heath. By the end of 1974 NVT had lost over £3 million.

However, the company still managed to produce new Commando models, with 1974 seeing the release of the Roadster based 'JPN Replica' and the 'Mk 2a Interstate'

The engine was a air cooled twin, four-stroke. A 77.0mm bore x 89.0mm stroke result in a displacement of just 828.0 cubic centimeters. Fuel was supplied via a overhead valves (ohv).