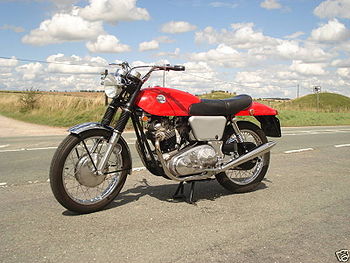 Launched to rapturous acclaim at the Earls Court Show in 1967, and four times voted Machine of the Year, the Norton Commando was the best-loved product of the final years of the British motorcycle industry. And yet it grew from a classic compromise. By the mid-60s, Associated Motorcycles (AMC), Norton's parent company, was in trouble. In late 1966 AMC was taken over by Manganese Bronze Holdings, a conglomerate which already owned Villiers. The motorcycle interests were amalgamated into one company - Norton Villiers.

Virtually all the current product consisted of 650 and 750cc Norton twins, using either the ageing Featherbed or Matchless frame. It was clear that the new company needed a flagship - and quickly, preferably by next year's show. Efforts initially centered on an existing design - the P10. This was a double overhead camshaft parallel twin, but after several months development it was apparent that the machine would prove to be too heavy, too rough and potentially too unreliable.

With only some three months to go before the show, engineering director Dr Stefan Bauer argued that conventional frame design was contrary to good engineering principles, and suggested that the P10 should have a frame based on a single top tube. Bauer also insisted that engine vibration could not be tolerated - and it was vibration that was one of the chief complaints with the existing Norton twins.

The idea put forward was completely radical - fit a modified version of the tried-and-tested Atlas engine to a new frame and to eliminate the problem of vibration, simply isolate the engine from the rider, together with the entire transmission train, including the rear wheel. This was done by cleverly bolting the separate engine, gearbox and swinging-arm assembly together as one unit. The unit was suspended from a spine frame based on a 24in diameter top tube, using adjustable rubber bushes at three carefully calculated points. The idea worked superbly, allowing the engine to shake to its heart's content without disturbing the rider and in 1969 the idea won an award for the most significant contribution to motorcycling.

Styling on the prototype was carried out by design consultants Wolf Ohlin’s, a company with no motorcycling experience. It included a silver frame and tank. At the rear it featured a ray hump, which led to the model being dubbed the Fastback.

Much lighter than its predecessors, the machine had phenomenal acceleration for its day, less than five seconds to reach 60mph, leading to a top speed of almost 120mph.