One of the most successful roadsters available during the 1950s and early 1960s was the Norton Dominator. It caused a sensation when revealed along with the unusual Velocette at the Earls Court Show of 1948. Of 497cc the Dominator was designed by the much respected Bert Hopwood who was formerly associated with the BSA and Ariel concerns. His latest creation was to set the Norton design trend for many years to come. In fact, even the last model produced by the Norton company, the 850 Commando, bears a close resemblance to the Dominator.

The engine employed was of the classic vertical twin design with push-rod operated overhead valves. Having a bore and stroke of 66 x 73mm and a compression ratio of 8-5:1, the Dominator engine was tireless and a cruising speed in the high eighties could be maintained all day long.

In 1953 the original plunger type rear suspension was replaced by a more efficient swinging-arm arrangement and shortly afterwards the frame was changed to the famous 'Featherbed', a legend in itself. These improvements now gave the Dominator excellent road manners which appealed to the sports-minded enthusiast, who now could experience the race-bred qualities that had previously been confined to the track.

The 1961 sports special model had various modifications over the standard version. Most noticeable was the absence of silencer on the left-hand side. Instead, siames pipes were utilized and this obviously aided ground clearance when enthusiastic riding was called for In fact, ground clearance was so good that only tire adhesion determined the angle of lean that was available.

Handling was also second to none, and on long twisting country roads the Dominator was a joy to ride. With positive steering and taut handling it gave the rider an unsurpassed degree of confidence. Obviously, the Featherbed frame was partly responsible. Roadholder front forks were used and these were complemented at the rear by adjustabl hydraulically damped Girling units. The ride obtained was slightly on the firm side, but neither comfort nor damping qualities were ever sacrific in order to aid handling.

On the sports version the motor produced 36bhp at 7000rpm, a good 6bhp over the standard unit. This was mainly due to the twin Amal Monoblo carburettors being over bored and used in conjunction with bigger inlet valves and ports. Also, special camshaft was fitted and consequently the crankshaft was slightly strengthened in order to take the extra output obtained.

Generally, the Dominator had a very good temperament. If starting followed the customary drill then no difficulty was found when starting up a cold motor. After a few kicks the engine would burst into life and the bike would soon be ready to pull away without argument or hesitation. In town the Dominator was docile and pleasant to use, but once on the open road the bike would change into a beast that quickly swallowed up the miles. Into top and the power would begin to surge once it got to 50mph. Brisk acceleration would then continue right past the magic ton until a top speed of around 110mph was reached. Vibration was always present but never became unbearable or excessive even whe the motor was red-lined through the gears. Even a 7000rpm in each gear the motor never felt strained and once the next cog was chosen, the Dominator would surge on until all four gears had been used to the full. All changes needed positive use of the clutch, but generally the gearbox was faultless an never caused concern.

The bike also excelled in braking. Here, each unit employed was of the drum type with an eight inch at the front and a seven inch at the rear. These could always be depended on to give surefooted stopping whenever needed, and remarkably brake fade never occurred, even when high speed retardation became necessary. In the wet the units remained fully watertight and only tire adhesion was responsible for the longer stopping distances produced. In the dry, however, a distance of approximately 27 feet could be obtained when braking from 30mph.

Despite some niggling faults the bike was nevertheless an excellent sports machine. It cried out to be ridden hard and as a connoisseur's mount the Dominator performed admirably—a true classic. 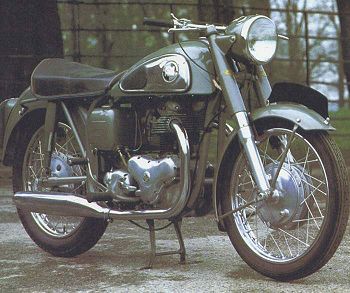 Launched at the 1951 earls court show, the model 88 was the first of nine norton road machines to be equipped with the featherbed frame and very rapidly became a best seller, eclipsing the older framed model 7 with which it shared the same engine unit. the new frame had a bolt-on rear section with a loop running around the back to carry the mudguard but from 1954 onwards, this was welded into place. an 8 front brake also arrived in 1954, and for the following year, an alloy cylinder head, amal monobloc carburettors and full width wheel hubs. the norton/burman gearbox was replaced by the amc box for the 1957 range and there was also a new camshaft. the cylinder head was modified for better heat dissipation, and the pear drop silencers gave way to a tubular design. coil ignition with an alternator superseded the magneto and dynamo in 1958. there were then only cosmetic changes to the silencers and petrol tank until the slimline frame came in for 1960. during its 15 year span, the model 88 was produced at various times in standard, sports special and de luxe versions. the standard version was produced until 1963, but the twin carburetor 88 sports special (88ss) brought out in 1961 continued until 1966, with a downdraught head being introduced from 1962. the de luxe had a rear tinware enclosure and was in production from 1960 to 1962.

Tuned 88 with twin carbs and siamese exhausts. Good combination of power, economy and reliability. 80mph cruising is possible without too much vibration. 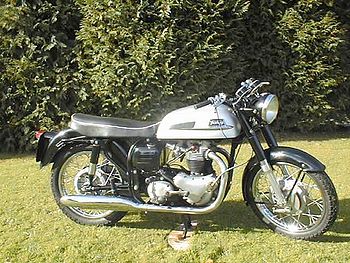 Another enlargement on the 600 engine with a single carb. It lacks top end power but lots of torque lower down the range and excellent gearchange action, with the handling of the slimline featherbed frame.

Norton launched its first 650cc twin, the US-market Manxman, in 1960. Available in Europe the following year, the Dominator 650 was built in standard, De Luxe and SS variants, all of which, plus the 500SS, featured a new cylinder head with down-draught inlet ports. With 49bhp on tap, plentiful low-down torque and exemplary handling courtesy of its race-proven Featherbed frame, the 650SS was one of the outstanding sports motorcycles of the 1960s, being more than a match for Triumph's Bonneville in terms of all-round performance. Indeed, in February 1962 Motor Cycling achieved a best one-way speed of 119.5mph at MIRA with a 650SS, more than 10mph up on that of the Bonneville tested the previous summer. 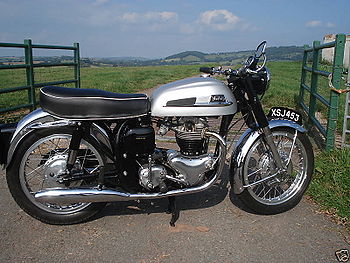 A stretched 99 with good performance and greater vibration. Still using the slimline featherbed frame. A very nice bike but over-rated.

The engine was a oil & air cooled twin, four-stroke. A 88.0mm bore x 79.0mm stroke result in a displacement of just 961.0 cubic centimeters.

The bike has a 5-speed transmission. Power was moderated via the wet multi-plate.