The Norton company tried to come back in business at the end of the 80's and chose something powered by Wankel engines. The F1 bike, with its simple, pure and very British design has the Seymour-Powell signature, the one who designed the less attractive Commander. The F1 has a 588 cc, liquid cooled Wankel engine.

The F1 was a road-going sports model that Norton based on its successful RCW588 racing motorcycle. The F1 was offered in only one livery: black with gold decals and grey and gold stripes, to reflect John Player's sponsorship of Norton's successful race team. 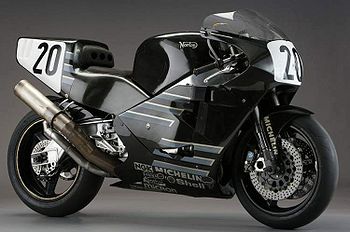 The Norton F1 was introduced to an expectant public in 1990, styled by Seymour and Powell and announced at a time when the factory John Player Special team were at the height of their success the new model was assured of attracting interest. Typed the P55 by the factory the development of the new model had been instigated by the head of the company, Philippe Le Roux, who recognised both the potential of a JPS inspired race replica and the need for the company to be seen to be producing some motorcycles. The stunning Seymour/Powell bodywork was complimented by high quality components such as the Brembo brakes and stainless exhaust system and an exceptional build standard. At its best on fast open roads, the F1 met with mixed reviews but is now highly regarded.

The engine was a liquid cooled dual disk wankel.

It came with a 120/70-17 front tire and a 170/60-17 rear tire. Stopping was achieved via dual disc in the front and a single disc in the rear. The front suspension was a WP Upside-down Forks while the rear was equipped with a WP Monoshock, Compression And Rebound Damping Adjustable. The F 1 was fitted with a 5.55 Gallon (21.00 Liters) fuel tank.